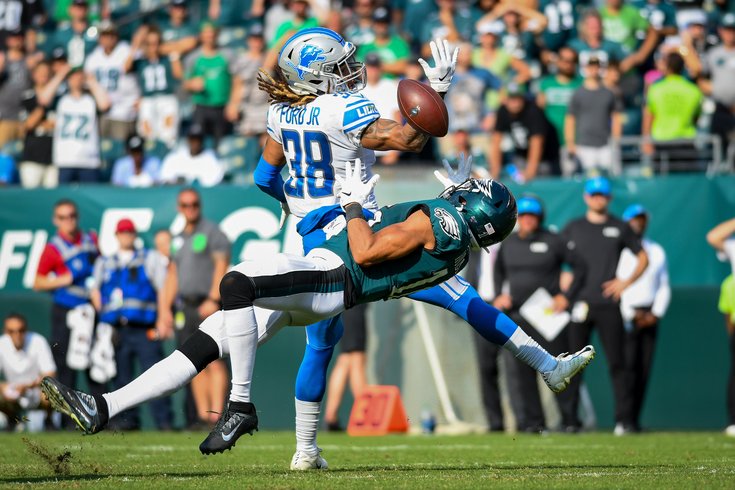 Despite not playing their best football, the Eagles had a chance to win the game in the dying moments on Sunday, but Carson Wentz was let down by a cast of backup weapons. Dropped passes ultimately led to a 27-24 defeat at the hands of the Detroit Lions.

• There can't be a more mystifying player in the league than Nelson Agholor. He was arguably their most impactful player in a bad way in the first half, with his late fumble allowing the Lions to stretch their lead to 20-10 before halftime. But as he tends to do, Doug Pederson kept giving him opportunities to redeem himself, and Agholor did come through for the Eagles late in the third quarter.

Usually, a double spin move only works in Madden, and even there it often leads to a fumble. But Agholor managed to put together an excellent run after the catch to get into the endzone.

Agholor would go on to score another touchdown midway through the fourth quarter, taking us all on another ride on the roller coaster. This is sort of the frustration with Agholor — the ability he has to make things happen in space only makes it more infuriating when he tries to leave with the ball before he secures it, leading to drops and fumbles like we saw at other times on Sunday.

• Carson Wentz's numbers ultimately weren't overwhelming, but I think you'd be misguided if you held that against him. Every time the Eagles started to get rolling, there was a miscue from a wideout, poor blocking up front, or some other mistake that was outside of his control.  Time and time again, he put guys in position to succeed and they couldn't come away with catches.

For the second week in a row, Wentz delivered what should have been an easy touchdown grab only for one of his weapons to flub a simple play, only this time it was tight end Dallas Goedert. Goedert wasn't interfered with, didn't have a hard-hitting safety closing in on him, he just straight up dropped a touchdown.

While Wentz wasn't perfect, that was a much more consistent performance than we saw in either of the first two games. A game to build on for him, if nothing else.

• Malcolm Jenkins is one of the only Eagles I think you could look at week after week and take little issue with. Well before he blocked the kick that gave Philadelphia a chance to win the game late, Jenkins was one of the lone bright spots on the defense, breaking up several big plays that could have been difference-makers for Detroit.

But of course, the play of the game came when it looked like hope was lost in the fourth quarter, only for Jenkins to give them one final chance.

This defensive unit would be an absolute mess without him.

• When your receivers drop the ball seven times on Sunday, it's going to be very tough to win. Over and over and over again, Wentz gave his teammates chances to make plays, and the outcome was similar almost every time. Right down to the game's final drive, the final offensive play even, passes bounced off the hands of Eagles recievers.

It is tough to win games when the guys who are responsible for catching footballs look like their hands were dipped in vats of grease. The Lions, on the other hand, came up with several tremendous plays along the sideline to extend drives on Sunday, and that was sort of the difference.

• The big concern I have with this team looking at the big picture is whether their defensive front is going to be as strong as it needs to be to anchor the defense. They've gotten some good performances from young guys in the secondary through three weeks, have Malcolm Jenkins as a stabilizing presence, but everyone knows they're not going to carry the team defensively.

When the Eagles were fully healthy to start the year, it was reasonable to be optimistic the defensive line could carry that unit. But injuries to Malik Jackson and Timmy Jernigan have changed things, and it will only get worse if other guys pick up knocks before Jernigan can return a month from now.

If the Eagles can't get pressure on the quarterback with their front four, it starts to impact Schwartz's scheme and defensive philosophy, which can lead to the sort of breakdowns and big plays the defense is built to prevent. The perfect example of this phenomenon came at the outset of the fourth quarter — in an attempt to get pressure on Matthew Stafford, Schwartz sent a blitz in the red zone that left Sidney Jones in one-on-one coverage against Marvin Jones, who Stafford hit for a touchdown.

If it felt like the Eagles couldn't get off of the field in crucial situations, that's why. We know the secondary isn't going to hold up in coverage all game. The pass rush has to make a difference.

It is too early to write their death certificate, and in fairness, the Eagles were much better up front in the second half than they were in the first, especially against the run. But the big boys need to find a way to consistently generate pressure, even if they aren't fully healthy.

• While we're on the subject of the defense, it seems worth noting that this team is more than a player away from being a factor on that side of the ball. Jalen Ramsey is the hot name right now, and I still think there's a good case to be made that you should pay up and go get him. But putting an elite corner on the field may not matter too much if the pass rush doesn't give you enough time to get there, or if the opposite corner isn't good enough to scare anyone.

This team has a lot to do to try to get right, and not a lot of simple ways to solve their problems.

• As an Andy Reid disciple, Doug Pederson is no doubt a man who wants to try to build a team out from the trenches. Unfortunately, the Eagles are not winning up front on either side of the ball, and that makes it really hard to absorb losses at skill positions.

On one of the game's decisive plays, Philadelphia's fourth-down attempt deep in their own territory, the Lions were able to generate pressure on Wentz with a three-man rush. That should not be possible, and Wentz getting forced into trying to scramble on fourth-and-eight with that little pressure up front is inexcusable. The offensive line has to be better, period.

• We still waiting for the breakout performance from Miles Sanders. He's got plenty of talent and has shown flashes in short bursts, but the Eagles drafted him to be a difference-maker, and so far he has not separated himself from the pack.

You could use that last sentence to sum up the Eagles on offense so far this year. Any team would struggle after losing their top two veteran receivers, but the draft is supposed to be your avenue to finding and developing young talent, preparing for when guys inevitably have to miss time. The Eagles have a lot of guys who can conceivably be good role players and show promise at times, but they lack young guys who opponents fear.

The hope is that someone, Sanders included, emerges as one of those sort of players over time. But they need one now, while two of their top weapons are sidelined.

• It ultimately worked because Matthew Stafford threw the ball into the turf, but picket fence defense conceded what should have been an easy first down to Detroit in a pivotal fourth-quarter spot.

• I know I mentioned this in first-half observations, but the missed facemask call on Miles Sanders near the end of the first half was absolutely unacceptable. You could not have asked for a more obvious penalty call and a more obvious situation where you need to protect the safety of a player than that.

Odds are, there will be no real consequences for an egregious error that could have ended in disaster for Sanders. But these are the sort of mistakes that just can't be accepted.

• The officials, for the record, were just an absolute disaster for both teams.