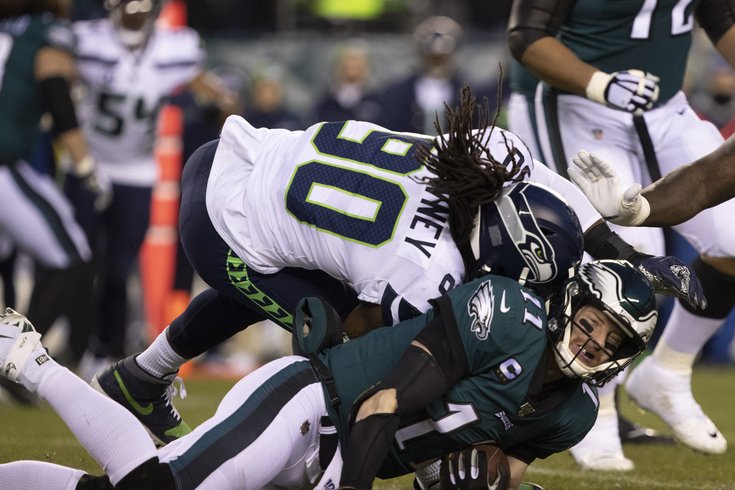 Jadaveon Clowney and Carson Wentz will forever be connected.

It's usually a bit of hyperbole to say that one first-quarter play cost a football team its entire season.

And there's really no telling how Carson Wentz would have played against the Seahawks on Sunday in the wild-card weekend finale if he hadn't been knocked out of the game with a head injury, as his defense played out of its mind against Russell Wilson and Co. in a 17-9 season-ending loss.

But there's no denying that Jadeveon Clowney, with this hit, robbed the Eagles of having a real chance to advance:

Clowney lowered his head a little too much on the play, one that clearly shows Wentz being down already. There was no flag for what many were calling a cheap shot — but there might be a fine.

I'm still trying to figure out how that Clowney helmet-to-helmet hit on Wentz as he was going to the ground didn't draw a flag. Clowney would've been ejected in college football. He got away with cheap-shotting Wentz out of the game.

According to referee Shawn Smith, Wentz "was a runner and he did not give himself up. We saw incidental helmet contact and in our judgement we didn't rule that to be a foul."

Smith went on to admit he hadn't seen any replays, and that what he saw on the field was not a foul.

Many of the players we spoke to in the locker room said they did not see the play in real time. But Jordan Howard, who was on the sideline with a lingering shoulder injury told NBC10's John Clark that there might have been "something extra" in the play.

Jason Peters said he spoke to Jadeveon Clowney after his hit on Carson Wentz. Told him it was a “dirty hit.” Said Clowney said my bad, but that’s about it. #Eagles

It's not the first time Clowney has been criticized for a hit on an Eagles quarterback. Last year with the Eagles jockeying for a playoff berth, Nick Foles got his facemask nearly ripped off by Clowney during a game against the Texans:

Clowney was also fined for a different cheap shot in that game as well.

Following Sunday's win over the Eagles, Clowney himself said all the right things after the game — but, you know — why wouldn't he?

Jadeveon Clowney said the play that led to Eagles QB Carson Wentz leaving the game was a bang-bang play and he had no intentions of injuring him. He said he’s been down the injury road himself and would never try to injure another player. #Seahawks

Josh McCown played well in relief of Wentz — about as well as one could hope for (18-for-24, 174 yards) — but with the Eagles already famously down pretty much everyone on offense, from their wide receivers to the right side of the offensive line, asking McCown to play the role of Nick Foles with a cast of practice squad castoffs proved too much.

Twice they had a chance, in the red zone down one possession in the fourth but both times the magic wasn't there. Ironically, McCown was sacked at the 10-yard line by Clowney to end their final scoring threat.

"It's next man up, it's the playoffs," Miles Sanders, who himself made a key mistake late when he dropped a sure first down pass in the red zone. "I appreciate how Josh came in and fought and showed a lot. It may be his last year playing."

The Eagles underachieved and then overachieved this season, playing way worse than expected amid injuries left and right before Wentz led them on an improbable march to a playoff spot after missing each of the last two postseasons with injury. But this one was supposed to be different for Wentz.

"I feel for him," Doug Pederson said, after he too told reporters he did not see Clowney's hit. "I feel bad for him. I briefly saw him in the dressing room after the game. I'm disappointed for him because I wanted this for him obviously, and a lot of his teammates did too. He's battled through a lot but we will learn from it and move on."

His career arc is cannon now. An MVP-caliber sophomore season ended with a torn ACL (and a Nick Foles Super Bowl win). A less-than-healthy third season led to a season-ending back injury and another Foles playoff run. A dramatic offseason led to a fully healthy 2019 and his first playoff game.

And then Clowney's hit.

Perhaps that's why Wentz' wife was by his side as he was examined in the Eagles locker room for a concussion.

One lasting impact (Wentz should be fine next season) of this game was the emergence of a new folk villain in Clowney, who was audibly booed every time he was mentioned by the PA announcer or near a play Sunday.

As the Captain of Philadelphia I am officially issuing a warrant for Jadeveon Clowney’s arrest. That was not just a 15 yarder. That was assault plain and simple.

If Clowney attempted the hit he made on Wentz while at South Carolina, he’d have been ejected for targeting.

"It's very difficult," Sanders said. "The whole season really we fought against a lot of BS, you know? And at the end of the season, the run we went on to just get here, for us to get here, get home field advantage and fall short, it's very disappointing. But there's no doubt in my mind this whole team, including myself, will come back hungry."

NBC's Cris Collinsworth said during the broadcast that Clowney "has been a headache" for the Eagles, which was a poor choice of words after Clowney literally gave Wentz a concussion. But one thing is for certain, Eagles fans can be counted on to try and give him a headache of his own anytime they have a chance (the Birds will host Seattle again next season).

In the meantime, Eagles fans, coaches and players will be left wondering what if? What would have happened if Wentz hadn't been knocked out? Would the Eagles have won the game?

"I would say, yes," Pederson answered when asked that exact question. "If he's healthy, with the game plan that we had, I think so."

And that's what hurts most about the cheap shot from Clowney.