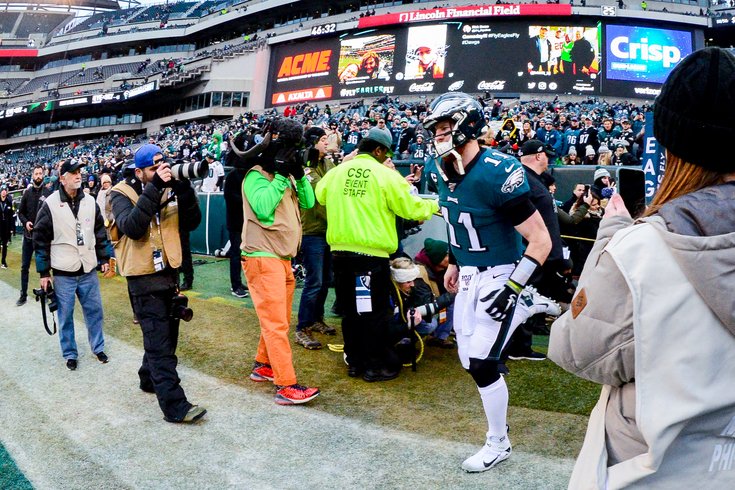 Carson Wentz enters the field before the Philadelphia Eagles wild card game against the Seattle Seahawks at Lincoln Financial Field in Philadelphia.

UPDATE [6:25 p.m.] — It's official — Carson Wentz will not return with a head injury — presumably a concussion.

Josh McCown will be the man going forward as a quarterback not named Wentz plays in an Eagles playoff game for the third straight season.

Injury Update: QB Carson Wentz has been downgraded to out.

UPDATE [5:55 p.m.] — Wentz is thought to be undergoing concussion protocol examinations, but could it be more serious than that?

Still no official word aside from "questionable to return" as the game nears halftime.

What's the worst case scenario for the injury-plagued Eagles in their playoff game against the Seahawks?

Well, it would be losing franchise QB Carson Wentz.

There is no definitive diagnosis yet, but according to a muddle of various reports, Wentz was hit during the Eagles' second possession and later in the first quarter was flagged by an independent spotter for a concussion test.

After a few minutes in the blue medical tent, Wentz headed into the locker room where he remained when the second quarter began.

Injury Update: QB Carson Wentz is being evaluated for a head injury and is questionable to return.

Journeyman 40-year-old back up Josh McCown entered the game where he began leading what is pretty much a practice squad/second string group of offensive players.

You have to wonder if things could get any worse for the star quarterback, who was making his first career playoff start after watching from the infirmary as Nick Foles became an Eagles legend with two consecutive playoff runs (and a Super Bowl title).

We'll keep you posted on Wentz when a more concrete prognosis is available.

MORE: Eagles would play Packers in divisional round, if they beat Seahawks | NFL playoffs live updates/open thread: Eagles vs. Seahawks | Mailbag: Which of the Eagles' 'practice squad guys' have earned roles in 2020?