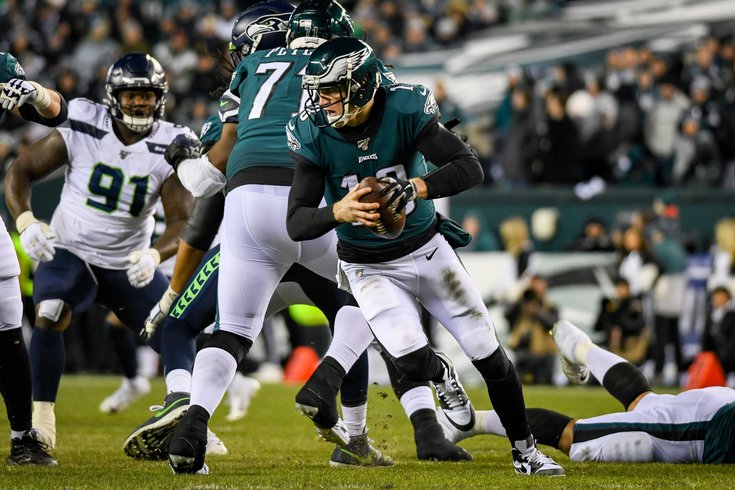 Quarterback Josh McCown during the Philadelphia Eagles wild-card game against the Seattle Seahawks.

The Philadelphia Eagles have an opportunity to put a sometimes disappointing, sometimes exciting, and always weird regular season in the rear view mirror, with a chance to make some noise in the NFC playoffs. Their first obstacle is the 11-5 Seattle Seahawks, a team that beat them Week 12, back in November.

As always, the Eagles are very banged up. It looks like they'll be without Lane Johnson, though thre's a chance that Zach Ertz could play through a lacerated kidney. The Seahawks are similarly banged up, and they have suffered a number of injuries along their offensive line, and at running back. You can find the final Eagles-Seahawks injury report here.

As we noted in our five matchups to watch when Seattle has the ball, the Eagles must take advantage of the aforementioned injury-ravaged Seahawks offensive line, and make life difficult for Russell Wilson. If they cannot, the Eagles' corners could be exposed by playmakers like Tyler Lockett and DK Metcalf on the outisde.

When Philly has the ball, Doug Pederson and Jeff Stoutland will likely be giving Halapoulivaati Vaitai and Matt Pryor some extra help against Jadeveon Clowney and company. The Eagles would be smart to have a healthy mix of run and pass against a Seahawks defense that is susceptible to both.

The Eagles were initially favored in this game when betting opened earlier this week. The line then swung to as much as Seahawks (-2), and then back to Eagles (-1). Here are our staff writer picks, and who some others around the country are picking in this matchup.

Will the Eagles make the "elite 8" for the third straight season? We'll see. Feel free to discuss the game — as well as the Saints-Vikings appetizer — below.