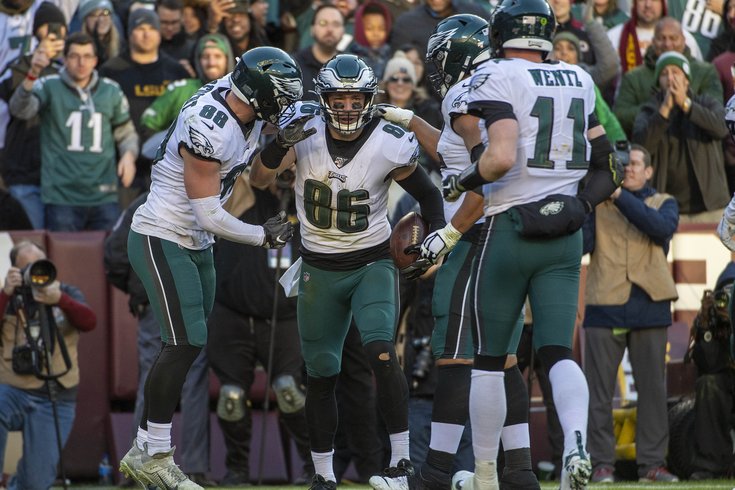 Zach Ertz still has a chance to be cleared for contact in time for Sunday.

As always, the Philadelphia Eagles have more than their share of injuries. However, for a change, their opponent is dealing with a high number of injuries as well, as the Seattle Seahawks have a depleted offensive line, and other injury-ravaged positions.

Here is the Eagles-Seahawks injury report, with analysis.

• WR Nelson Agholor (knee): Agholor hasn't played since the Eagles' loss to the Dolphins in Miami. In his absence, the Eagles have put up at least 400 yards of offense in each of the last four games with a receiving corps comprised of Greg Ward, J.J. Arcega-Whiteside, Robert Davis, and Deontay Burnett.

• TE Zach Ertz (ribs, back): "Zach... still not cleared for any contact," Doug Pederson said of Ertz on Friday. "He will work a little bit on the side again like he's done this week and stuff like that, but we're waiting on a few doctor results tomorrow. If things go favorable, he'll play; if they don't, he won't."

I actually do think there's a chance Ertz will be cleared in time to play on Sunday. If Ertz can go, that would obviously be a huge boost for the Eagles' offense, as Ertz is Carson Wentz's most reliable target.

Update: While this does not say it definitively happened, it looks like Ertz has indeed been cleared.

Here’s some news eagles fans have been waiting to hear... looks like Zach Ertz has been cleared to play tomorrow .... per league source.

I would lean toward Johnson not playing. We covered the ramifications of Johnson playing / not playing in our five matchups to watch when Philly has the ball.

Per sources: Lane Johnson is out for tomorrow ... if eagles get by Seattle ... it’s believed he will be ready for the next opponent....

Halapoulivaati Vaitai will have his hands full with Jadeveon Clowney, who does not appear on the Seahawks' injury report, and is good to go on Sunday. Matt Pryor will fill in at RG.

• RG Brandon Brooks (IR): Brooks spent the entirety of the 2019 offseason rehabbing his Achilles tear, and was amazingly able to start Week 1. He'll now spend his 2020 offseason rehabbing his shoulder. There's a decent argument to be made that Brooks was the best guard in the NFL in 2019. Obviously, this is a huge loss heading into the playoffs.

• WR DeSean Jackson (IR): The Eagles' offense has had a pathetic lack of speed ever since Jackson suffered an abdominal injury Week 2. If the Eagles beat the Seahawks, Jackson is eligible to return from injured reserve.

• CB Ronald Darby (IR): Darby returned to the team in 2019 after testing the free agent waters, and had a disappointing season before landing on IR with a hip flexor injury.

• LB Kamu Grugier-Hill (IR): Grugier-Hill looked like he was primed for a breakout season, which was derailed in training camp with an MCL injury that caused him to miss the first three games of the season. After playing only 5 snaps against Washington, Grugier-Hill reported back pain, and he was shut down for the season on IR, with conflicting messages from the team and Grugier-Hill's agent.

• RB Darren Sproles (IR): Sproles is done for the season with a hip flexor injury. There was really no reason that all of his snaps shouldn't have been going to Miles Sanders in the first place. He said he plans on retiring at the end of this season.

• LT Duane Brown (knee): As expected, Brown was unable to return in time for this matchup after having his knee drained. The Eagles must take advantage of the Seahawks' already bad -- and now very banged-up -- offensive line. George Fant will fill in for Brown at LT.

• LB Mychal Kendricks (knee): Kendricks had a big game against the Eagles Week 12, when he made 13 solo tackles. He tore an ACL against the Niners last Sunday.

• LG Mike Iupati (neck): Iupati will be a game time decision, per Pete Carroll. If he can't go, then the Seahawks will be without arguably their three best offensive linemen.

• WR Jaron Brown (knee): 16 catches for 220 yards and 2 TDs this season. If Brown can't go, with Turner out and Josh Gordon suspended, the Seahawks will be thin at receiver.

• RB Chris Carson (IR): Carson was the Seahawks' big, workhorse back. He carried 278 times for 1230 yards (4.4 YPC) and 7 TDs this season. Carson suffered a fractured hip Week 16 against the Cardinals, ending his season.

His season is over after a torn ACL.

• RB C.J. Prosise (IR): Prosise was the Seahawks' RB3. He too has hurt the Eagles in the past:

Prosise in on IR with a broken arm.

• TE Will Dissly (IR): Highly productive 23 catches for 262 yards and 4 TDs in 6 games before he went on IR with an Achilles injury.

• C Justin Britt (IR): Filling in for Britt will be C Joey Hunt, who as we noted in our five matchups to watch, is thought of as a good technician, but at 6'2, 299, with extremely short 30¼” T-Rex arms, he is player that a healthy Fletcher Cox should be able to feast on if he get the opportunity to do so.

• OL Ethan Pocic (IR): Versatile backup offensive lineman who started Week 1, and appeared in two games before being lost for the season with a back injury.

• DT Al Woods (SUS): Woods is a big, 330-pound run-stuffing DT. He was suspended for four games for PEDs.

• S Tedric Thompson (IR): Starting safety. Had 19 tackles and 2 INT before going on IR with a shoulder injury. The Seahawks traded for Quandre Diggs at the deadline to replace Thompson.