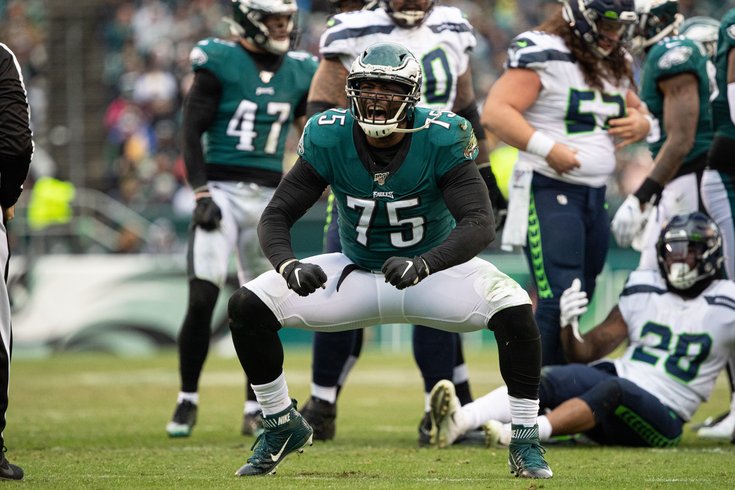 Philadelphia Eagles defensive end Vinny Curry reacts after a defensive stop against the Seattle Seahawks during their meeting earlier this season.

After being forced to play both playoff games on the road last January, the Eagles were able to capture a division crown* in 2019 to ensure they'd be opening this postseason at Lincoln Financial Field, just like they did two years ago when they went on to win the Super Bowl.

*Of course, by the middle of the season, winning the NFC (L)East was their only chance at making the playoffs at all. So it's not like they had much of a choice.

And where they're playing won't be the only thing this Eagles team has in common with that team — they'll also be opening the playoffs as a home underdog, just like they were throughout their run up to capturing the organization's first Lombardi Trophy. Remember, hungry dogs run faster.

In fact, the Eagles have been underdogs in each of their last six postseason games, including Sunday's game against Seattle. In their previous five outings, the Birds are 4-1 as playoff underdogs. Over that same time, according to ExpertBettingNetwork.com, no other team has more than one win as a playoff underdog.

This time around, they'll be hosting Russell Wilson and the Seahawks, who have found great success against Philly in recent seasons. In fact, Wilson has never lost to the Eagles and has been lights out against the Birds in his four starts against them, throwing seven touchdowns to just one interception while averaging 240 yards per game and a 98.9 passer rating. He's also run for 115 yards and a touchdown against the Birds and even caught a TD pass, the only of his career, back in 2016. They'll also be hosting Marshawn Lynch, who will be making his second start of the season, and his first against the Eagles, after re-signing with Seattle last week following another injury to their already banged-up backfield.

Unlike those previously mentioned postseason dogs, the Eagles will have a new quarterback under center, as Carson Wentz prepares to make his first career playoff start after being injured each of the last two seasons. Will he find the same success as his the guy who came before him? Or will it take some time for him to get his footing now that it's win-or-go-home time in the NFL?

Let's take a look at how our writers see Sunday's game against the Seahawks playing out, as well as everything you need to know about how to watch and the latest betting lines...

The Eagles head into this matchup, as you all know, with a four game winning streak in four "win or die" games. The Seahawks, meanwhile, began the season with a 10-2 record, but fizzled down the stretch, losing three of their last four games, which included bad losses to the Rams and Cardinals. Momentum is on the Eagles' side, and they'll be playing at home, where their defense has been notably better this season.

The Seahawks have an outstanding, electric quarterback in Russell Wilson, a pair of good wide receivers, and some good linebackers. Beyond that, it's hard to find many things to like about their roster.

Offensively, Seattle seems determined to be a run-heavy team, when their offensive personnel should clearly dictate that they try to win by allowing Russell Wilson to throw to his dangerous receivers. Even with their top three running backs out, and even though they're playing against an Eagles defense that gives up big plays like they're candy on Halloween, I don't think the Seahawks are suddenly going to change their run-first philosophy.

Defensively, the Seahawks (a) are bad against the run, and (b) have struggled all season long to find a consistent pass rush. Carson Wentz and his skeleton crew of skill players have gained at least 400 yards in each of their last four games, and there's no reason to believe they can't move the ball once again against a shaky Seattle D.

It’s probably not surprising that this, the Eagles’ 17th game and their unexpected postseason debut this season, is the hardest for me to come to a decision on.

I think there is something to be said for the momentum and inspired football played by the Eagles in recent weeks. I think there is something more to be said for the homefield advantage they’ll have against the Seahawks on Sunday. You can throw out the convincing evidence that the line for this one (currently +1.5 for the Birds) is blatantly wrong in both directions and properly cite several key injuries as major factors in deciding who’ll prevail in this one.

Still, for me, it comes down to the incredible coaching job Doug Pederson has done as his season’s gameplan and roster has been decimated. The Seahawks — and Russell Wilson — are more talented. But the Eagles will win.

Picking a winner in this one is tough, as in recent weeks neither team has looked like the version of the one that squared off at the Linc back in Week 12. Somehow, the Eagles have suffered even more injuries in the time since that loss to the Seahawks, and yet they seem to be playing some of their best football of the season. Unfortunately, that elevated level of play has come against lesser opponents, as their current four-game win streak has come against a bunch of pretty bad teams. On Sunday against Seattle, it's going to be back to reality for the Eagles, who will face a non-NFC East opponent for the first time since Dec. 1. And the Eagles haven't won a game outside of the division since Nov. 3 (Week 9 vs. CHI).

Still, it's tough to pick against the Eagles in this spot, even though they might be missing Zach Ertz and Lane Johnson on Sunday. The last time these two teams met, Johnson was also sidelined and his replacement, Andre Dillard, was beaten so badly it likely changed the entire course of that game. That won't be the case this week, with Halapoulivaati Vaitai getting the start if Johnson can't go. And if he can, Big V will slide over to guard to fill in for Brandon Brooks, who is done for the season.

But what this game will likely come down to, however, is the defense's ability to stop Russell Wilson and the Seahawks wide receivers. If they can be kept in check, and the Eagles can avoid a bunch of deep passing plays, they'll win this game. And given how much better the Eagles defense has been at home this season — not to mention how well this team plays with its back against the wall — I'm not going to pick against them.

The Seahawks had a chance to avoid playing the Eagles in Philly by beating the Niners in Week 17. They failed, and now they're going to pay the price...

MORE: Eagles vs. Seahawks: Five matchups to watch when Seattle has the ball | When Philly has the ball

Russell Wilson is one of the few quarterbacks in the league that would genuinely terrify me as a coach. Even when he has a down game, there is always that second half stretch where he starts extending plays and distorting the opponent’s defense. When he does it on the road, you can almost feel the existential dread in the air.

You add that on top of Philly’s concerns, from Wentz’s first playoff start to their injury report to the fact that this team hasn’t been tested by a decent opponent down the stretch, and I could easily talk myself into picking Seattle. They’re home underdogs for a reason.

I just can’t bring myself to do it. Wentz has really shown me something to string wins together in spite of all the injuries, and this defense has been a different beast at home. The regular season loss turned on a 58-yard touchdown from Rashad Penny and featured several Philly turnovers in enemy territory — the Eagles have cleaned up unforced errors as of late, and Penny (along with fellow running back Chris Carson) is out for the season.

They will have to dig deep for this one with all of the injuries coming in. If Lane Johnson doesn’t play, I fear Wentz is going to get pummeled in the pocket. But Doug Pederson’s Eagles find ways to win in these situations anyway, so who am I to bet against them?

The Eagles deserve credit for a remarkable turnaround to save their season. Carson Wentz deserves a ton of credit, too, for getting the Eagles here. But this season means nothing if they don’t exceed what they did last year, which was reach the divisional round of the playoffs before losing. This team was built to win a Super Bowl. There are no participation trophies in the NFL. I get the sense that the Eagles — and the fanbase — are just happy to be here, hosting a playoff game. Seattle has greater aspirations.

The Seahawks won 11 games this season, just four less than the combined 15 the Cowboys, Redskins and Giants won. You remember them, right? The last three teams the Eagles beat. Seattle quarterback Russell Wilson has won 86 games in the NFL, including going 4-0 against the Eagles. That’s almost double what Dak Prescott, Daniel Jones and Dwayne Haskins have combined to win (45). The Seahawks are banged up, but I’m sure some folks have noticed around here, so are the Eagles, who will be without the NFL’s best guard, Brandon Brooks, and possibly without Lane Johnson. So we know Jadeveon Clowney and Ezekiel Ansah, the Seahawks’ other defensive end, will be feasting.

Wentz has done an amazing job putting this team on his back and getting them into the playoffs. But the train stops here — making this season a big disappointment, though possibly saving some people their jobs. Nothing less than reaching the Super Bowl appeared acceptable in August. Now just hosting a playoff game is. And I’m sure the fanbase will complain that Wentz had nothing around him when the Eagles lose to Seattle, or next week to San Francisco. But they weren’t complaining when Greg Ward was making big catches, and Boston Scott was running over the Giants, or Deontay Burnett was hauling in 41-yard passes. Hey, the Eagles did win their Super Bowl in 2018, during the 2017 season. That seems sufficient enough around here lately. And they have reached the playoffs these past two years, only to get knocked out earlier and earlier.

MORE: 10 numbers that explain the Eagles season (and unconventional success)