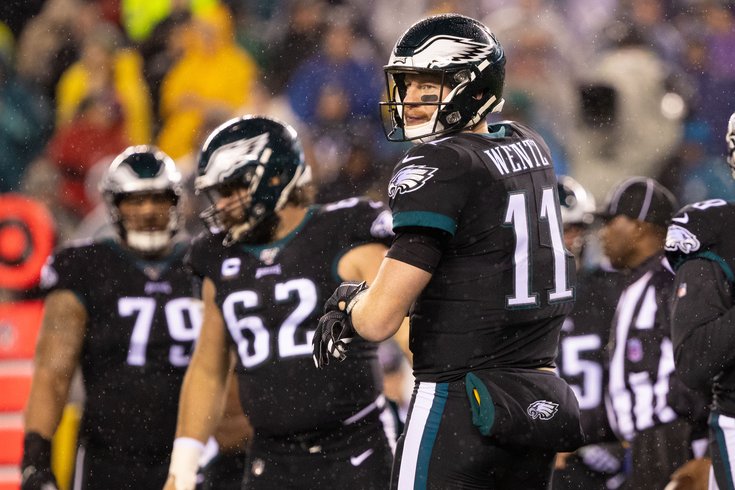 Carson Wentz will make his first playoff start on Sunday.

In our Eagles chat on Thursday, there were a lot of questions that we could not get to in time or other questions we did answer but could use more color. Actually, there was more overflow than usual, so we're going to do two mailbags -- one today, one tomorrow -- to answer some of the overflow.

Question from SPQR13: Who will Andy Reid lose to this year in a game they should win?

Well, to begin, we're not blaming Andy for Dee Ford jumping offsides last year, are we? That aside, I really like the Chiefs' chances this year. They've won six straight, and while Lamar Jackson is going to be the runaway MVP winner this season, I'll still take Patrick Mahomes over him all day.

Anyway, as long as you're asking about Andy, let me go ahead and lay out my NFL playoff predictions:

Yes, I hate myself for picking a repugnant team like the Saints to win it all.

As you might imagine from the previous question, I like the Chiefs at 4-1 and the Saints at 5-1, but sure, of the long shot teams, I like the Eagles at 25-1 more than the Seahawks, Vikings, Texans, Titans, or Bills.

If they get past the Seahawks, and if DeSean Jackson can return and look anything close to his former self, and if Lane Johnson can come back to his dominant form, and if Zach Ertz isn't hindered by his assorted injuries, and if they don't suffer any more crushing losses, then I do think the Eagles could be in good shape against the 49ers and beyond. And then who knows? But obviously, a lot has to go the right way for them.

Question from 4th and 26: If you were the Eagles, would you rather play the Chiefs or Ravens in the Super Bowl?

The Ravens, and it's not even close. The Chiefs would expose the hell out of the Eagles' corners, while a run-heavy team like Baltimore would play to the Eagles' strengths. Plus, the Eagles hosted the Ravens in training camp this year, and at the time, both teams felt pretty evenly matched. I think their confidence level would be high against that group.

Question from Norm Snead: What is the possibility Nick Foles is ever the Eagles' backup QB again?

The Eagles can't bring Foles back. Carson Wentz has come a long way this season as a leader, and I think that you run the risk of undermining his role as a leader if you bring back Foles.

The risk vs. the reward just isn't worth it.

Question from Hinkie: Jimmy, Wentz clearly looks more comfortable throwing to guys off the scrap heap then Alshon and Agholor. With all of the leaks regarding Wentz' personality, combined with Alshon's body language and Agholor's regression (he probably just stinks), it seems pretty obvious that things fell of the rails there and they just didn't like each other. That didn't seem to be the case in 2017 so what happened? Any insight?

In 2017, the Eagles were blowing teams out every week. When you do that, it's rare for players to complain. In 2018 and 2019, the Eagles faced adversity, and that's when you see which players respond positively and negatively.

Two straight seasons, an "anonymous" player criticized Wentz to Josina Anderson, in addition to anonymous sources who were critical of Wentz in a report here at PhillyVoice. Because Anderson has broken several Jeffery news items in the past, and the fact that Jeffery was named by Howard Eskin as the anonymous source, there's a pretty good bet that, you know, it was Jeffery.

This is all kinds of uncomfortable...😬 pic.twitter.com/8vUtN891PR

In the wake of the PhillyVoice report, Wentz acknowledged that he could do more as a leader, which included flying teammates out to his home in Houston for workouts during the summer. According to Jeff McLane of the Inquirer, Jeffery didn't show.

Wentz made an extensive effort to spend more time with his teammates this offseason, especially the receivers, in light of a report that he had been selfish and uncompromising last year. In June, after he signed his contact extension, Wentz treated his top three receivers – Nelson Agholor, Jackson, and Jeffery – and tight end Zach Ertz to a celebratory dinner at Barclay Prime.

In July, he flew many of the Eagles’ skill position players down to Houston, where they stayed at his new home, for workouts and socializing. Wentz bought Jeffery a plane ticket, but the receiver never showed, sources familiar with the trip said.

On the surface, it doesn't appear that Wentz has a problem with Jeffery. If there's animosity, it feels more like that's a one-way street.

Jeffery is going to be extremely difficult to get rid of this offseason because of an ill-advised contract re-do that the team did with Jeffery this offseason. Still, if they're sure that he was the anonymous source (and it's hard to imagine how they could come to any other conclusion), the Eagles need to do whatever is necessary to get him out of the locker room, even if that means trading him along with an asset just to get him off their hands.

Question from Eagle in Zona: Lord Jimmy, is Shelton Gibson a real player in this game or just window dressing?

I love how many questions I've gotten about Gibson this week, though I get it, especially given the team's over-reliance on guys who were formerly with the team.

He's just here to play special teams, most notably as a gunner, and that's pretty much it. I would be shocked if he actually got any snaps in the regular offense on Sunday.