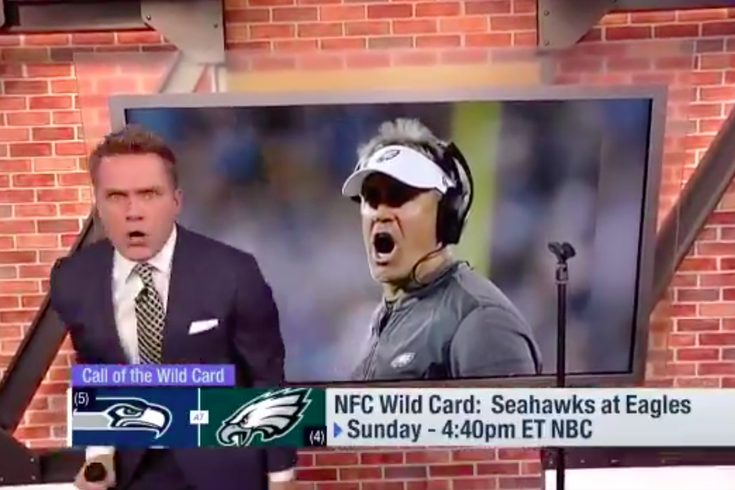 On "Good Morning Football," NFL Network host Kyle Brandt picked the Philadelphia Eagles to beat the Seattle Seahawks in the Wildcard round of the 2019-20 NFL Playoffs. He dubbed Dough Pederson "The Wolf of Broad Street."

When the Philadelphia Eagles made their historic Super Bowl run in 2017-18, no one in the national media stood more firmly in their corner than the NFL Network's Kyle Brandt.

In a now-legendary "Good Morning Football" speech, Brandt went on a lengthy rant about how the Eagles were being overlooked heading into their divisional round playoff game against the Atlanta Falcons. With each successive win, all the way through the Super Bowl, Brandt became more and more strident in his defense of the Eagles.

On Friday, Brandt returned with another Oscar-worthy monologue about the Eagles' chances in this Sunday's Wildcard game against the Seattle Seahawks at Lincoln Financial Field.

Once again, the injury-ridden Eagles are underdogs heading into the playoffs — or are they? If you ask Brandt, they're now an experienced pack of wolves led by head coach Dough Pederson.

THE WOLF OF BROAD STREET!!@KyleBrandt explodes before Wildcard Weekend. pic.twitter.com/TKktA3hXyT

For as much as Eagles fans have to deal with the likes of Max Kellerman trashing Carson Wentz, or Colin Cowherd praising the Eagles but ripping the fanbase, it's nice to have a guy like Brandt who's willing to pop a vein in his neck for Philadelphia.

Sunday's matchup won't be easy. It feels like an eternity since the Eagles beat the Seahawks, who come into the Linc as a solid road team with years of playoff experience and a Super Bowl-winning quarterback in Russell Wilson. Doug Pederson has yet to beat them since taking over as coach in 2016.

And yet, something about this game and the way the Eagles clawed their way into the playoffs this year seems fitting for an upset.

Several more weeks of Brandt destroying his vocal cords would be a welcome subplot to an Eagles playoff run.