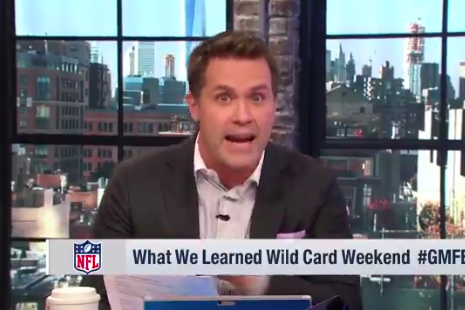 Chatter over the Eagles becoming the first top seed to face an underdog matchup at home against a No. 6 seed in the NFL playoffs – largely the product of an underwhelming final month of the season and Carson Wentz's season-ending ACL tear – hasn't quieted much since Sunday.

As right tackle Lane Johnson pointed out on Tuesday, that could work in the Birds' favor as their divisional round matchup with the Atlanta Falcons on Saturday nears.

But on Wednesday, one NFL Network morning host had a clear message for all you naysayers out there: shove it.

"Boy, is everyone piling on them," Good Morning Football's Kyle Brandt said of the Eagles, before mocking several media headlines that touted the Falcons' chances at Lincoln Financial Field.

"What did I learn this week? I learned that the Atlanta Falcons have been given the first second-round bye in history. It's over," he added, tongue firmly in cheek. "(Eagles coach) Doug Pederson is expected to have a press conference where he just says he forfeits. 'Atlanta is way too much, we're not gonna play.' Lincoln Financial Field is going to be used for an MLS game. I believe it's the Philadelphia Union. They're having a soccer game this weekend."

Why? Because it's hardly relevant that the Falcons will face the top-ranked defense in all of football on Saturday, Brandt argued.

He also touted the Eagles' 7-1 record at Lincoln Financial Field this season and their league-leading success in the red zone this season, although he didn't mention that the Eagles' first 13 games of the season – all of which the Eagles entered with Wentz under center – have a lot to do with those gaudy numbers.

But that was only the start of Brandt's defense of the Eagles in a wild rant that lasted nearly five minutes.

"Certainly they don't have anybody on the team who was doubted or overlooked," he said, mentioning an array of such players and others, namely Jeff Fisher throwaway Nick Foles and Pederson, who former NFL GM Mike Lombardi once said "might be less qualified to coach a team than anyone I've ever seen."

When you thought he might wrap it up, Brandt just kept going.

He mentioned Eagles offensive coordinator Frank Reich's famous comeback in the 1992-93 playoffs, and he even threw in a "Rocky" reference.

"They're looking up that staircase and the critics are up there, and they're yelling down to them," Brandt said.

Then, he actually yelled.

The rest of the video, if you choose to watch it, includes multiple exclamations of "You can win!" and co-host Nate Burleson flapping his arms in the background while shouting "Fly Eagles Fly."

Written off, and on the ropes, the @Eagles have something to prove on Saturday.

Inspired by Rocky, @KyleBrandt believes they can get it done.