Mailbag: Which of the Eagles' 'practice squad guys' have earned roles in 2020? 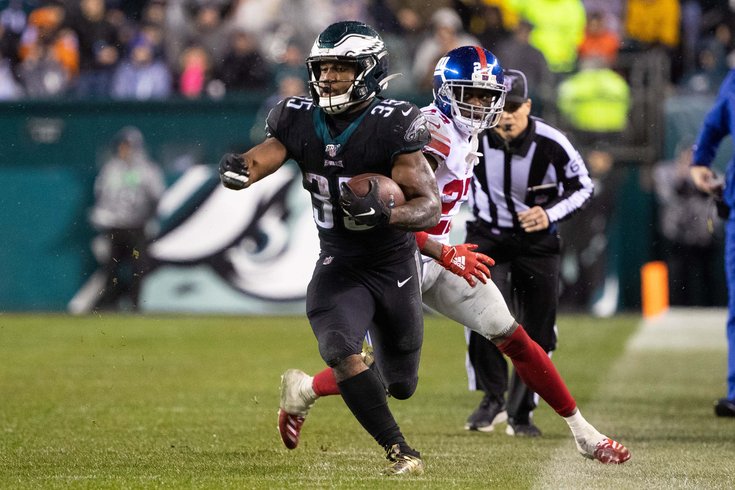 In our Eagles chat on Thursday, there were a lot of questions that we could not get to in time or other questions we did answer but could use more color. Actually, there was more overflow than usual, so we did two mailbags -- one on Saturday, and one here -- to answer some of the overflow.

Question from Hinkie: Which of the practice squad all-stars will be here next year? I think Greg Ward and Boston Scott are obvious, although in (hopefully) much smaller roles. Deontay Burnett seems to have something about him though. What do you think? Anyone else?

The only player that I would say is close to a lock to being on the 2020 active roster is Boston Scott. He has shown enough as a runner, a receiver (24 catches on 26 targets), and on special teams to have a role on the team in 2020, at a minimum, as the RB4. Miles Sanders will be back in 2020, but beyond him, there are no definitively returning players at running back, and the Eagles like to carry at least four (sometimes five) backs heading into each season.

You mentioned Greg Ward as being "obvious," and while I believe that he will be on the 2020 roster, he is less of a lock to me, as he is still going to have to earn his way onto the team in training camp. His competition could very well be Robert Davis, who has more raw athleticism, but needs to refine his game, or Deontay Burnett, who has a certain smoothness about him, though he may be somewhat limited athletically. It's a pretty good bet that the Eagles invest heavily in the wide receiver position this offseason, both in free agency and the draft, which means that Ward, Davis, and Burnett are going to have to fight for one or two roster spots.

To note, there are defensive players who could sort of fall under the umbrella of "practice squad all-star," but after watching Treyvon Hester not make the team after I would have viewed him as something close to a lock after the 2018 season, I don't think anyone is really safe there.

Question from Norm Snead: Is your third running back next year Boston Scott or Corey Clement?

Scott fills a role closer that of Darren Sproles, who said he is retiring. I don't know if Scott is your RB3 or your RB4, or even if putting a number on him matters. He should ideally have some kind of small role in the offense next year.

Clement has to prove that he can stay healthy, and I doubt the Eagles are viewing him as a reliable role player at this point. He'll have to earn his way onto the team with a good camp and preseason next year.

Question from Ross: Wentz has been pretty amazing at squeezing throws into tight spaces, but it seems way more necessary than usual. Is it more on the play callers or the wide receivers for not having much separation?

Certainly there are some schemes that are able to get receivers open, but I would attribute the Eagles' constant lack of separation to the absence of a dangerous deep threat.

All offseason we talked about how DeSean Jackson does wonders for an offense simply by being on the field. Opposing defenses have to respect the possibility of being beaten deep, and those short-to-intermediate areas of the field become less congested. Without him, the Eagles really haven't had anything close to a guy who can take the top off of a defense.

On a scale from 1-10, I'd rate this season as something around an 8 for Wentz in terms of "quarterbacking scale of difficulty." He has a good offensive line in front of him, but obviously, the extreme instability at wide receiver would be difficult for any quarterback to overcome, and Wentz has done that.

If/When the Eagles do get a deep threat or two who can stay healthy, those passing windows are going to open up, and the game should become much easier for him.

Question from Sausage Sandwich: Any chance Sidney Jones gets more snaps on Sunday? Do you think they still see potential in him or is he destined to ride out his contract as the 5th corner?

I think that the Eagles' most talented cornerback grouping right now is Jalen Mills and Avonte Madox as the starters on the outside, with Cre'Von LeBlanc in the slot. However, you can bet the Seahawks would look for ways to get DK Metcalf (6'3, 228) lined up against Maddox (5'9, 184). Is the much bigger Rasul Douglas the better option in this game? Maybe, but then you have to worry about Metcalf's and Tyler Lockett's speed against him.

Sidney Jones is sort of the "middle ground" guy in between Maddox and Douglas, if that makes any sense, but if the way Jim Schwartz has used his corners is any indication, he clearly views Jones as "the fifth guy," as you put it.

Question from Seth: With Jake Elliott struggling a bit, do you expect Doug to go for it on 4th down more this game?

This isn't directed at you, Seth, but just generally speaking, are we being a little hard on Jake? On the season, he was 22 of 26 (84.6%), which is good. In the last five games, he is 8 of 12, which I might agree would constitute a slump for for him, except that his misses were from 49, 47 (rain), 53, and 55. It's not like he's missing 40 yarders or something. And obviously, he has made some extremely clutch kicks in his career here.

That said, the weather forecast is calling for 10-15 MPH winds at game time, and it should get calmer as the game goes on. Ignoring game situation, if the Eagles are faced with, oh, say, 4th and 5 from the Seahawks' 33, yes, I do think they should consider going for those, whereas they might try a FG on a sunny day in September.

Question from DB: Really cool stuff on Josh McCown. Do you think he comes back if Doug wants him?

I don't read any of my colleague's work during the season as a matter of choice, out of fear that I'll regurgitate something good that someone else has said. My preference is to have as many original thoughts as possible, and create something of a unique view of the team, uninfluenced by others.

However, there are times when a story picks up enough steam that I have no choice but to read it because I might get asked about it on the radio, or it'll pop up repeatedly in a chat or something, and I can't be like, "Derrrr, I don't know what you're talking about."

Anyway, Zack Rosenblatt of NJ.com wrote a really good story about Josh McCown, and the effect he has had on his teammates this year, most notably Wentz. I was forced to read it because of the traction it picked up, and you should too.

In my view, the Eagles should be doing everything possible to make Wentz's job easier, and if McCown can still competently spell him on the field if need be, then I think the investment in him is well worth it. If he can't play anymore, and he wants to stay with the team in some type of coaching role, then I think he's a guy who could be valuable there as well.