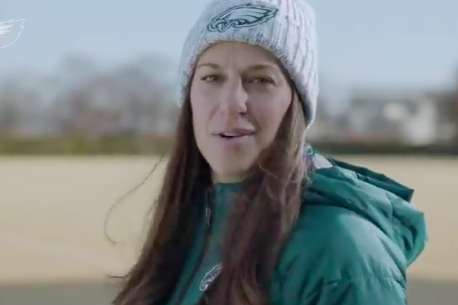 The Philadelphia Eagles brought in USWNT star Carli Lloyd to produce the hype video for their Wildcard playoff matchup against the Seattle Seahawks on Sunday, Jan. 5, 2020.

The Philadelphia Eagles will look to extend their four-game winning streak into the playoffs on Sunday when they face the Seattle Seahawks at Lincoln Financial Field.

Before the season began, the Eagles welcomed U.S. Women's National Team star Carli Lloyd to one of their joint practices with the Baltimore Ravens. The Delran Township native raised eyebrows when she nailed a 55-yard field goal that prompted questions about whether she might be a better NFL signing than, say, a guy like Cody Parkey.

Lloyd didn't land in the NFL this year, but she is the star of the Eagles' latest hype video ahead of Sunday's Wildcard game.

The video released on Saturday afternoon centers around the Eagles staying focused on the "here and now" of the playoffs.

During a season that looked like it might have been lost in November, the Eagles' ability to take things one game at a time down the stretch is ultimately what earned them a home playoff game.

Against an experienced Seattle team on Sunday, they'll need everything they've got to advance to the next round. The whole zen thing sounds a bit Pete Carrollesque, but since Doug Pederson has yet to beat him head-to-head, it's worth a shot.