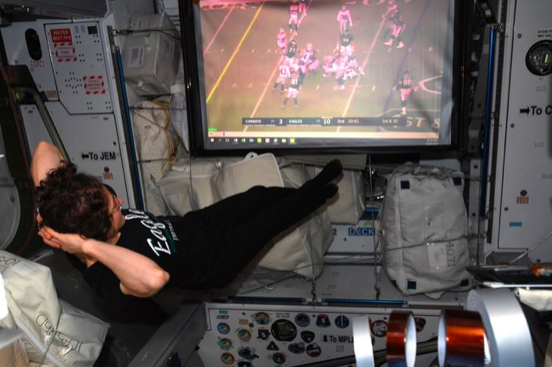 Christina Koch, a NASA astronaut aboard the International Space Station, is a diehard Philadelphia Eagles fan who makes sure to get the broadcasts of big games sent to her from Earth.

One week ago, U.S. astronaut Christina Koch set a record for the longest single spaceflight by a woman, eclipsing the previous mark of 288 days on the International Space Station.

On Sunday, she'll likely be watching the Philadelphia Eagles take on the Seattle Seahawks in the Wildcard round of the NFL playoffs. Yes, from outer space.

Koch took to Twitter on Friday to share a photo from the ISS, where she lounged in an Eagles shirt and watched Philadelphia's huge win over the Dallas Cowboys on Dec. 22.

It’s the weekend! The question I get the most up here is what do we do in our free time. For me it’s mostly photography, spending time with my crew, reading, and watching sports like surfing and football. Lately I’ve especially been a fan of Sundays. #FlyEaglesFly pic.twitter.com/8Urv3j5CQf

Koch, 40, was born in Grand Rapids, Michigan and raised in Jacksonville, North Carolina. Her husband is a South Jersey native, which explains why she roots for the Eagles.

To get internet on the ISS, astronauts rely on radio waves to receive signals that are sent from Earth to a satellite in orbit. The ISS uses the mircowave frequency band to get the signal on their antenna and transmit it to a computer.

As explained in the video below, the ISS has a 12-18 GHz Ku band connection with Mission Control, which provides a higher bandwidth than the astronauts' day-to-day internet for things like Twitter and email. The Johnson Space Center in Houston holds a special license with their cable company to directly send broadcasts to the ISS.

In 2014, three astronauts were able to watch the FIFA World Cup from the ISS. Late last year, Italian astronaut Luca Parmitano watched the Rugby World Cup from space, and previously he became the first person to play a DJ set from space transmitted to a club on the Spanish island of Ibiza.

The only glitch with the system in place is that the ISS gets about 80 minutes of a broadcast for each 90-minute orbit. That could be crucial in any sporting event, but fortunately Koch has Eagles Twitter to keep her up to the second on the drama unfolding at the Linc.

Koch is currently on a mission intended to help NASA learn about the effects of long spaceflights. Findings from her extended stay on the ISS, expected to last a total of 328 days, will help the space agency plan for future deep space exploration, including missions to the moon and Mars.

So. Much. Physics. As if making the coldest human-made place in the universe wasn’t cool enough, now the Cold Atoms Lab experiment is measuring gravity’s most elusive fundamentals too. pic.twitter.com/psc4OaVZJ2

While most of Koch's time is spent fulfilling the duties of her mission and maintenance, Sundays are typically off-days for astronauts. That works out perfectly for Koch this weekend.

Seattle, you can keep your fancy Space Needle. Philadelphia has an Eagles fan in space.