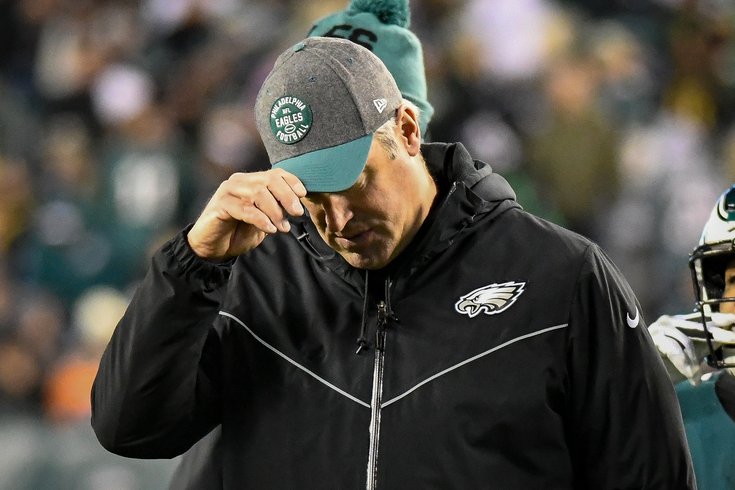 The Eagles fought valiantly to the very end, but they ultimately could not come up with a win without their franchise quarterback, losing to the Seahawks 17-9 to close out wild card weekend.

Here's what I saw on Sunday. Good season, everybody.

• I don't know if there is a team in the NFL, and perhaps professional sports, that has responded better to adversity than the Eagles have since Doug Pederson took over this team. They have lost basically their entire receiving core, rotated through corners, suffered blows to the defensive line, and even lost their franchise quarterback in the first quarter of a playoff game. They have had a million chances to fold, and instead, they come out swinging each and every time.

Philadelphia's first drive of the second half may have ended in a field goal, but coming out of the halftime tunnel with a purpose reflects well on all of them. There was no hanging their heads after learning Wentz was done for the rest of the game. We have come to expect this from Pederson-coached teams this time of year, though it shouldn't be taken for granted. They don't lean on excuses or feel sorry for themselves, they go out and just play football.

(Before I give too much credit to Pederson, there are leaders on both sides of the ball who help keep these guys together. Guys like Jason Kelce fully embrace the underdog, next-man-up mentality, and the power of belief can make a real difference even if it just seems like nothing but chatter at times.)

This team was dealt a bad hand for most of this season and still ended up in a hard-fought playoff game on their turf. They have holes to address and change to make, but they certainly have a capable leader.

• Fletcher Cox can go home on Sunday night knowing he left absolutely everything on the field. Cox was borderline unblockable for stretches of the Seattle game, blowing up run plays and flushing Russell Wilson out of the pocket, even if the latter led to some frustrating third-down conversions with Wilson's legs.

Almost every single big play the Eagles' defense made started with Cox. Seattle tried everything to slow him down, throwing double and triple teams at him at times, and that only made life easier for the rest of his teammates to get to Wilson and keep the Eagles within striking distance.

When he is at the top of his game, Cox is up there with the best defensive players in the NFL. They would have had a snowball's chance in hell without him.

• Another defensive player who deserves a pat on the back: Malcolm Jenkins. In addition to all he does as an emotional leader for this team, Jenkins has to do everything for this group, covering and blitzing and cleaning things up as the pieces change week-to-week, and he often does. It was no surprise, then, that Jenkins came up with one of the most impactful plays of the game when he sacked Wilson early in the fourth quarter.

The pocket collapses and Jenkins comes up clutch on 3rd down!#WPMOYChallenge Jenkins pic.twitter.com/Yzb3TcaFbp

To reiterate, give a lot of the credit to the defensive front here. That's bully ball.

• Shelton Gibson did one thing, and it was an important thing — he ran fast down the field and forced the Seahawks to respect him as a deep threat. Even before he drew a monster pass interference play late in the game, his routes drew attention over the top and opened up some space for his buddies underneath. Deep threats are valuable, who would have thought?

• The area where Wentz may have been missed the most? Red-zone offense. After marching down the field on their opening drive of the second half, the Eagles ran into a brick wall deep in Seattle territory. Josh McCown is plenty capable of moving the ball between the 20's, banged-up offense or not, but Wentz's ability to buy time with his legs and fit balls into tight windows is a major point of separation in the red zone.

That difference also leads to more conservative playcalling at times, and that makes it hard to catch defenses off guard. It wasn't hard to figure out if the Eagles were going to hand the ball off or throw it on third-and-short plays, for example, and though I can be critical of them when they get too pass-happy in those situations, it is certainly nice to at least have the threat of variety on those downs.

Without Wentz, Philadelphia didn't have that, and it sort of doomed them.

• I said this the first time they played, and I have probably said it in casual conversation 50 times this season, but it sure would be nice for the Eagles to have D.K. Metcalf instead of J.J. Arcega-Whiteside. One player has been making big plays for his quarterback and creating separation down the field all season long, the other has been mostly invisible in an offense that was desperate for anyone to step up and establish themselves as a playmaker. Just look at the success of Greg Ward, who went from practice squad player to an integral figure for the offense.

There has to be a balance between valuing tools and production at amateur levels, and it seems too often the Eagles have just ignored the former. Forget the big play Metcalf made over the top for a touchdown or even the game-clinching play in the fourth, he also got free on plenty of short and intermediate routes, serving a cruel reminder of how important draft decisions are.

While we're on the subject, I know everyone is rightfully mad at Jadeveon Clowney for his cheap shot on Wentz, but it sure seems it would have been a more valuable use of resources to trade for him instead of Genard Avery, who they had as a healthy scratch on Sunday. Clowney was an absolute nightmare for the Eagles to try to stop on Sunday. There is no substitute for talent, and don't let anyone tell you otherwise.

• Jason Peters is one of the great Eagles linemen ever and has a good case to be a Hall of Famer, but this seems like it should be his swan song. He got absolutely worked most of Sunday evening, and with Andre Dillard waiting to take over the left tackle spot, there's no better time to move on than now.

• I don't want to heap too much blame on Jim Schwartz because Wilson is a tough guy to stop, but playing sticks defense and not spying against a quarterback who lives for moments where he can evade you in the open field is just nuts to me. Philadelphia's defensive front did an excellent job of flushing Wilson out and creating opportunities to limit big plays, but because the Eagles were often dropping back in coverage, Wilson got to run into tons of space before anyone even got close to him.

Wilson is as good as anybody when it comes to pulling third-down conversions out of thin air. You can't make it easier on him.

• Where do the Eagles go from here? This is a team that still has plenty of holes to fill, which we haven't talked about much lately because a bunch of unsung players stepped in and helped them win down the stretch. But they are in dire need of legitimate weapons at wideout, upgrades at corner, and perhaps an inspection of which position coaches and coordinators deserve to stick around.

I'm not the guy building the football team, but getting a legit No. 1 for Wentz seems like it should be at or near the top of the list. Being able to carry an undermanned group doesn't mean he should have to. Unfortunately, as discussed above, Howie Roseman's eye for receiver talent might leave a bit to be desired, and the "sexy" pick will more likely give way for help in the trenches, as is custom.

• There is nobody I feel worse for than Wentz, who fought his way through a slog of a season with his help combusting around him, brought this team to the playoffs with a terrific final stretch, and had the chance to play playoff football ripped out from under him in the first quarter of his first playoff start. That is a cruel twist of fate, the cruelest of all short of suffering a catastrophic injury.

Plenty of questions still have to be answered by Wentz, and that is part of the shame of him missing this game. We don't know how he would have looked in this high-leverage situation, we don't know any more about him quarterbacking a team through a deep playoff run than we did following the final regular-season game.

The challenge for him next season is to come back and eliminate the swoons we saw this year. Late-season Wentz was everything we were promised, but you play 16 games plus the playoffs for a reason. The elite guys sustain these runs. Let's see if he can ever get there.

• McCown may not be Nick Foles, but it's hard to ask for more from a 40-year-old backup thrust into this situation. McCown bought time in the pocket, played (mostly) mistake-free football, and struck a nice balance between taking what was there underneath while still trying to push the ball down the field. His escapability in the pocket was not something I was prepared for at this stage of his career, and he looked Wilson-esque at times in the second half.

Unfortunately, the limitations of an old backup shone through at the worst possible times. McCown's fourth-down throw to Miles Sanders was a bit behind the rookie running back, and McCown held onto the ball far too long at times. On a pivotal fourth down in the final minutes, McCown never even gave the Eagles a chance to score, taking a sack instead of giving someone a chance to make a play in the endzone.

Most Eagles fans will go to bed tonight wondering what could have been with a healthy Wentz. Unfortunately, as is so often the case in Philadelphia, we'll all be waiting until next year.

• I can't stress this enough: if this is your take when a guy gets knocked out of a game after an opposing player hit him in the head while he was on the way to the ground, you should not be covering sports. Or anything at all, really.

This is not an instance of Wentz needing to "suck it up" or play through pain. This is not an instance of Wentz having brittle bones or weak muscles or poor dietary habits that led to a fatigue-related injury. It is an injury to his goddamn brain, the thing that controls everything for a human being. You don't just slap some dirt on it and go back out there slinging the rock.

Trying to make some point about him being "injury-prone" on a day like today just makes you look like a gigantic jackass with no understanding of human anatomy. Do better.

• I'm not sure why the Eagles and Seahawks appeared to be officiated by two different crews at times, but one team got the benefit of the doubt on every single borderline call and the other got penalized if they were even a tenth of a second late on hits.