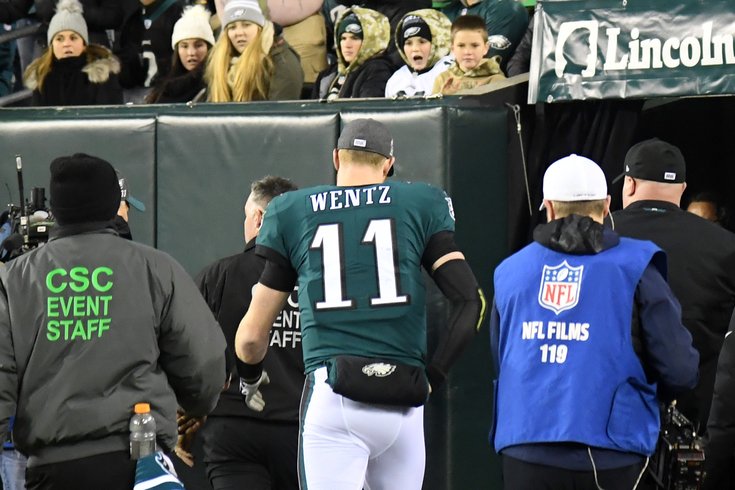 Philadelphia Eagles quarterback Carson Wentz walks into the tunnel during the first quarter against the Seattle Seahawks.

The Eagles lost Carson Wentz to the concussion protocol in the first half of their wild-card game against the Seahawks, but they are hanging around anyway, heading into halftime down 10-3. No word yet on whether Wentz will return for the second half.

Here's what I saw through the first 30 minutes on Sunday. Lots of drama ahead.

• It was a shame he had to make the throwaway to begin with, but Carson Wentz did well to recover and throw away the botched toss to Miles Sanders on their first possession.

• Craig James' early penalty on special teams looked like it might have dire consequences after Russell Wilson ran right down the middle of the field for a big pickup early in Seattle's ensuing possession. But credit to the defense for stiffening up and holding down the fort from there, as it allowed the Eagles having to play out of an early hole.

No one was bigger than Fletcher Cox, who absolutely bulldozed through Seattle's interior to force a bad Wilson throw on third-down. The Eagles were aided by some suspect choices from the Seahawks, but that doesn't take any credit away from the men in the trenches who bottled Seattle up. Cox was a man possessed in the first half, blowing up anything the Seahawks tried to do up the middle and putting Wilson under a lot of pressure.

This is the Cox we have seen dominate entire months of the season in years past, but only in fits and starts in 2019-20. With the Eagles ravaged by injuries, there would be no better time for a monster Cox performance than right now.

• Okay, maybe one guy was "bigger" on that specific drive than Cox, considering Vinny Curry was the man who got his hand on a field-goal attempt and prevented Seattle from scoring. In any case, the defensive line showed up and showed up big, as they continue to build on a stretch run where they finally delivered on their promise as a unit.

• Early on Sunday, it was tough for the Eagles to establish the rushing attack behind Miles Sanders. Seattle was getting into the backfield with ease, and the rookie was often fighting just to get back to the line of scrimmage. But that started to change in the second quarter, with Sanders and Boston Scott picking up sizable chunks of yards on the ground.

All teams need the threat of running to cause hesitation in the secondary, but that's especially true for the Eagles, who are currently built around a rag-tag group of wideouts who struggle to create separation. If you can create moments of hesitation in the secondary, you just might be able to hit on enough big plays down the field to put yourself in a position to score.

This isn't going to be a shootout, obviously. The game is going to be won or lost in the trenches, and I think that the Eagles have acquitted themselves well there so far.

• No one will confuse him with prime Peyton Manning, but Josh McCown did just about everything the Eagles could have hoped for in the first half. He got rolling midway through the second quarter, picking up some key conversions with his arm and his legs, although I'm sure there were a lot of deep breaths on the sideline when their only backup quarterback put himself in danger outside of the pocket.

Is he going to have enough to will this team to a victory without Wentz? That remains to be seen. Doing okay so far, at least.

• A question I'm sure everyone at Lincoln Financial Field thought to themselves or screamed out loud — what in the world was James thinking blowing up a guy who called for an obvious fair catch? The Eagles finally avoided the traditional Jason Peters false start on an opening drive, only to take a much worse penalty on special teams when they had to punt the ball away.

By the way, I feel like we have talked about this before, but rarely are we ever talking about the special teams unit in a positive light outside of the kicker and punter. That unit has been letting them down for what feels like years now.

• Cre'Von LeBlanc has made a lot of big plays for this team, but man did he blow it on the pivotal third down for Seattle late in the first half. He made a diving tackle attempt before the ball even got to its recipient, and that gave David Moore acres of space to run into, turning what should have been a stop for a potential punt into a near touchdown for Seattle.

They can't afford misses like this today, not with the margin for error as small as it is.

• Derek Barnett takes more stupid penalties than any player I can remember suiting up for the Eagles. I think quarterbacks draw flags on some suspect calls with the way the league has tilted in the concussion awareness era, but Barnett was not even close to getting to Wilson when the ball was out of his hands.

Rather than having a chance to stop Seattle on third down in the red zone, the Eagles were back to square one, and Marshawn Lynch bullied them on the way to the endzone. Players who give the other team extra chances are liabilities in big spots.

(By the way, if you want to point out that it's ridiculous to call this penalty and not the hit on Wentz that knocked him out of the game, I'm not going to stop you. Same applies to the no-call when McCown threw the ball away late in the half. We'll get to that play below.)

• Way too many unforced errors in the final minutes of that half. Philadelphia was the less sloppy team for about the first 25 minutes, but the final five just weren't clean enough.

• It wouldn't be a 2019-20 Eagles game if a key contributor didn't go down in the opening quarter, and I am sorry to report Brandon Graham was the first man up for Philadelphia on Sunday evening. He would end up walking off under his own power and appears to be okay (though he went to the locker room in the second quarter and did not return), but I can't stress enough how important he is to this defense. They don't have much depth on the line, especially because Genard Avery was a healthy scratch, and Graham is a guy who has made big plays in big moments routinely for the Eagles.

But there is a bigger cause for concern for Philly — Wentz hit the medical tent before the first quarter was over, eventually walking back to the locker room with the independent concussion consultant. Replays showed that a Jadeveon Clowney cheap shot was the cause of the issue, and it goes without saying that having to win a playoff game with a backup quarterback would be suboptimal, even if the Eagles have made it look easy in recent years.

Wentz getting hurt in the first quarter of his first playoff game, by the way, is just cruel. There are times when you wonder if he is just the sort of guy whose body can't hold up with the way he plays, but this was a concussion from a dirty hit. Look at this trash:

It goes without saying that the gameplan changes completely without Wentz in there. Josh McCown is plenty serviceable as a backup, but there are throws and runs Wentz can make that open up the playbook and allow you to do things that are off the table with a backup.

By the way: concussions are not to be trifled with and his health is the No. 1 concern, in my view. Would it suck if he's ruled out? Yup. But you do not mess with head injuries. And this, for whatever it is worth, sounds pretty ominous:

Hopefully, this is just a case of a concerned wife checking on her husband.