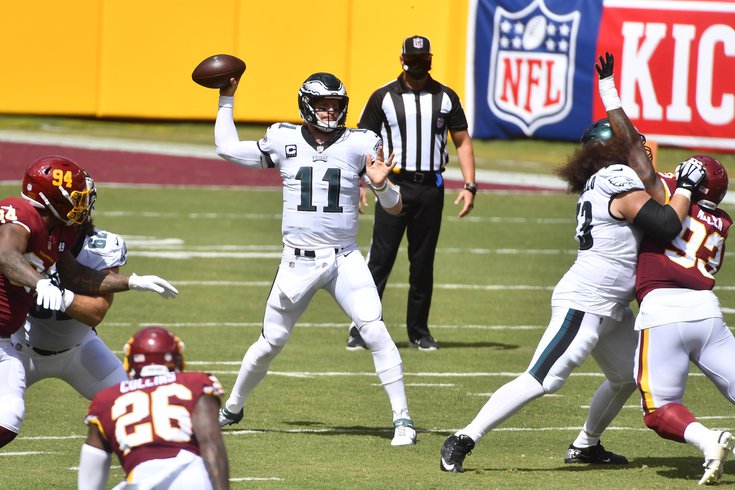 Philadelphia Eagles tight end Zach Ertz (86) is congratulated by teammates after scoring a touchdown against the Washington Football Team during the first quarter quarter at FedExField.

The Eagles opened the 2020 season with a strong first half against the Washington Football Team (lol I still can't believe this is the name), taking a 17-7 lead in the opening 30 minutes. Philadelphia will get the ball coming out of halftime, and they'll hope to redeem themselves after a lapse in concentration in the final two minutes.

• Sometimes the most important matchups are pretty obvious heading into a game, and Week 1 looked like it would be all about the battles in the trenches on both sides of the ball. Despite some question marks about the right side of Philadelphia's line, they had a bigger advantage on the other side of the ball. The Eagles' defensive front absolutely blew away Washington at the point of attack.

Welcome back Malik Jackson, who missed almost all of last season and made an immediate impact on the first series. After Brandon Graham burst through the line for a run stop on second down, Jackson followed that up with a hit on Dwayne Haskins on third down, forcing Washington into a quick three-and-out. Jackson would come through again on Washington's second possession, blowing up a third-and-short run to force their second straight punt.

On the other side of the ball, rookie Jack Driscoll was one of the few guys who didn't massively struggle early, and he was tasked with filling the big shoes of Lane Johnson. Driscoll's job was keeping Carson Wentz clean while dealing with No. 2 overall draft pick Chase Young, and it doesn't take a watchful eye to see him making a difference on this play:

Watch Jack Driscoll on this rep against Chase Young#Eagles pic.twitter.com/obSg5TfKS3

We'll get to the bad stuff with the line below, but frankly, it could have been worse.

• Philadelphia's first scoring drive was all about "12" personnel, with the two-headed monster of Zach Ertz and Dallas Goedert absolutely cooking early. It's a good way (at least in theory) to get around the O-Line problem — the Eagles can put some extra bulk on the field without sacrificing athleticism and pass-catching ability, and their first possession was an absolute clinic from the tight-end duo.

It culminated in this strike to Ertz in the back of the end zone after a series of Goedert catch-and-runs moved the chains:

The guy who deserves most of the credit for that success, frankly, is Carson Wentz. He had some problems getting rid of the ball (tell me if you've heard that one before), but I thought those issues were more a product of the offensive line/blocking than anything. For the most part, he was getting rid of the ball quick, not locking in on a single target, and perhaps most importantly was able and willing to sling the ball downfield, something we didn't see a lot of last season.

It helps when you have receivers with the speed to beat teams over the top. Enter Jalen Reagor, whose first NFL catch came on a 55-yard strike from Wentz that allowed the Eagles to climb out of third and 22.

I'm sure many of you could get used to seeing this every week. With more time back there, Wentz looks like he has come into the season locked in and ready to carve up opponents. Hopefully they can get it cleaned up in front of him.

• One of the big criticisms of Jim Schwartz's defenses has been a tendency to refuse "shadowing" top options on other teams. There are legitimate reasons for that — it's a lot harder to disguise man vs. zone, for example — but it allowed wide receivers like Washington's Terry McLaurin to have huge days last season.

That has changed with the addition of Darius Slay, who spent most of the first half sticking McLaurin and doing a pretty damn good job of bothering him. With Washington's top threat kept under wraps, everything else fell into place in the secondary, and the synergy you see from good defenses jumped off the screen. Corners gave the defensive line a little bit of extra time to pressure Haskins, and the defensive line got in his face enough to force tough/off-balance throws, many of which fell harmlessly to the turf.

Long way to go here, but a strong start from almost everyone on defense.

• All those reps Greg Ward got at the end of last season appear to have paid dividends because he has emerged as one of Wentz's favorite targets on third-down plays. Ward picked up some critical yards to extend drives in the first half on Sunday, including a pickup midway through the second quarter that led to Philadelphia's second touchdown.

And boy, was that second touchdown to Goedert a beauty. Capping off an excellent first half, Goedert made a tremendous adjustment to track the ball mid-flight, and it was a beautiful throw over the top from Wentz, who put the perfect arc on it to hit him in stride for six points.

A thing of beauty.#PHIvsWAS | #FlyEaglesFly

Great play design, great execution, and job well done earlier in the drive to make sure they had that chance in the first place.

• After all the haggling over the pay increase, it sure didn't look like Jason Peters was prepared to play the left tackle position where he has made his home. It's a tough matchup for the offensive front but he was one of the few guys that almost needed to have a good game, and Peters had one of the worst first halves of anybody on the team.

I would need a second look at it to know for sure, but it felt like a lot of the problems on the offensive line were related to tight-end mistakes on the edges against, admittedly, some very good Washington pass rushers. Richard Rodgers had a terrible attempt at a chip block on one of Wentz's sacks, for example, and Goedert got beaten around the outside by Ryan Kerrigan on a screen play that was blown up before it started.

Beyond that, most of the obvious errors looked to be on Peters, who got beaten with both speed and strength in the opening 30 minutes. He has a track record that suggests he deserves the benefit of the doubt, but not a good start to the season.

• Two notable drops from Eagles players in the first half: a throw through the hands of Goedert in the first quarter, and a brutal drop from rookie John Hightower, who might have heard the footsteps coming on a throw over the middle. For the most part, the skill position guys acquitted themselves well, but they left just a bit of meat on the bone.

• Hard to complain about the offense during a half where they put up 17 points, but let it also be said that the run game was basically useless. Playing from in front, that's going to have to be better in the second half so they can put the game away late.

Okay, hold that thought, there's one big complaint to make about the offense in the first half: Wentz's simply unacceptable turnover in the final two minutes. The Eagles had all the momentum, a big lead, and a chance to at least get into field goal range after another stop. Nothing needed to change about their offensive approach, and Wentz combined a bad throw with a needless risk.

The Eagles paid for it, with Washington marching down a short field for six points before halftime. They might come out with a little more pep in their step after that finish to the half, which is exactly what you want to avoid with a team that looked to be on the ropes.

• Are we going to do this with DeSean Jackson again this season? After the first drive for Philadelphia, his presence was spotty all afternoon for no apparent reason. He didn't return to the locker room and remained on the sidelines throughout the first half, and after the injury-plagued mess of last season, it's hard not to get nervous whenever he disappears for long stretches at a time.