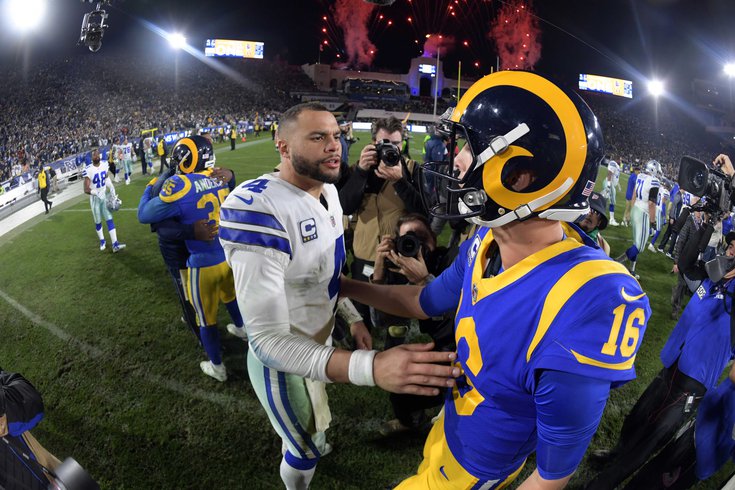 Folks sometimes think of Jared Goff as a good quarterback, until after they have to root for him.

In past seasons, Philadelphia Eagles fans generally rooted for their own team, and kept an eye on the rest of the NFC East. Whether you think they're still Super Bowl contenders or merely just another team trying to eke their way into the playoffs, it's perhaps worth keeping tabs on the conference, as opposed to just the division.

• Packers at Vikings: In my view, the Vikings are the better team, and the Eagles probably match up better against Green Bay. It's better for the Eagles if the Packers win the NFC North.

• Seahawks at Falcons: The Eagles have mostly fared well against the Falcons in recent years, while the Seahawks have completely owned them.

• Bears at Lions: Eh... the Bears are probably better, but an on-fire Matthew Stafford has gotten the best of the Eagles on multiple occasions.

• Raiders at Panthers: In 2018 and 2019, I might have thought, "Well the Eagles are highly likely to make the playoffs, so a team like the Panthers finding an unlikely way in could lead to a favorable first game matchup." In 2020, I'm more inclined to think that it's probably just better if all the expected bad teams actually stay bad, as an Eagles playoff berth feels less certain heading into this season.

• Browns at Ravens: The Eagles will play the Ravens Week 6 and the Browns Week 11. There's no real rooting interest here, but the Eagles would benefit if the Ravens don't appear to be as dominant as they were out of the gate last season.

• Chargers at Bengals: The Eagles have the Bengals Week 3. It's probably better for a guy like Joe Burrow to take some lumps early, rather than have him experience some immediate success. If you're the Eagles, you'd rather see things start to click for Burrow later in the season, when he faces your divisional rivals, than to have him come into Philly geeked up with confidence.

• Buccaneers at Saints: As much as some of the national guys want Tom Brady to make the Bucs into something of a Super Bowl contender, the Saints are the real threat in the NFC South, and it's not even close, in my view.

• Cardinals at 49ers: Again, the Cards could be up-and-comers, but the Niners are the big dog in the NFC West.

• Cowboys at Rams: I don't need to explain this, right?

• Steelers at Giants: I think we're all pretty sure the Giants stink and there's a decent chance their season could spiral out of control quickly, but I'm sure the Eagles would like to see confirmation of that Week 1.