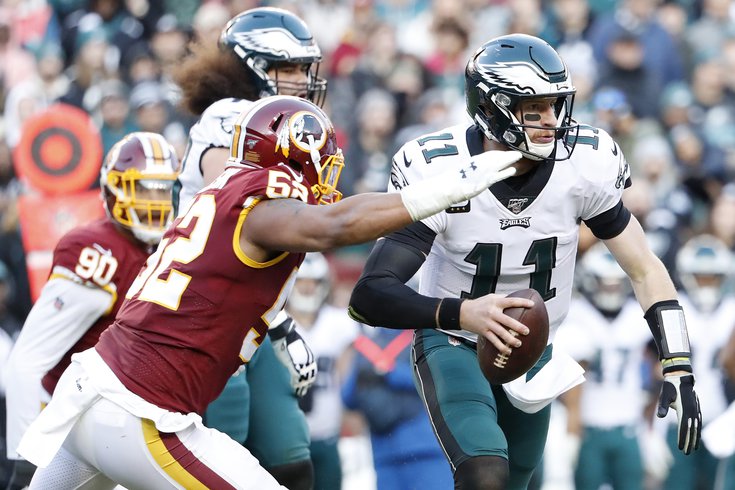 Will the Philadelphia Eagles offensive line be able to keep quarterback Carson Wentz upright in their opener against Washington?

Welcome back to another season of Eagles Over/Unders, where we'll take a look at some real, but mostly made-up props for the Birds' upcoming matchup. This week, they'll travel to Landover, Md. to face the Washington Football Team in their 2020 opener.

It's typically hard to get a read on a team, let alone two, before the season actually starts, but this year it's far more difficult than it's ever been, with a truncated offseason program and no preseason games of which to speak. Still, we're going to try to predict how Sunday's Week 1 game will play out by providing five numbers to watch in the form of over/unders.

Will Carson Wentz be able to stay upright? Will Miles Sanders and Jalen Reagor play big roles? Will Darius Slay be able to shut down Terry McLaurin after he killed the Eagles as a rookie? Let's find out...

[A quick note before we start for those new to our over/unders: Unless it's explicitly stated, these are my own over/unders based on how I think the players will perform on Sunday — and the advice that follows is where I would put my money if I had to. That being said, they are not all actual numbers you can bet on, but we'll let you know when they are.]

That's the current total being offered by DraftKings and FanDuel, according to TheLines.com. Yes, this is one that you can actually bet on, but it's an exceptionally difficult one to predict.

Will the strange offseason and lack of preseason games help the offense or the defense more? And trying to glean anything from Thursday night's opener is tough considering it's not only a small sample size, but one of those teams was the freakin' Chiefs and the other traded away the most important player on their team not named DeShaun Watson this offseason. Furthermore, that's before we get into the lack of certainty over specific matchups in this game, like the Eagles offensive line vs. Washington's dangerous pass rush or the aforementioned McLaurin vs. Slay matchup we mentioned earlier (more on both of those in minute).

We could see this total going either way, but there are plenty of questions surrounding Washington, which has a young offense and new coach. And the Eagles secondary should, theoretically, be improved. And then on the other side, the Eagles have serious questions along the offensive line — not to mention Lane Jonhson's questionable status — and injuries that could limit Sanders, who was a huge part of this offense's success down the stretch last season.

This almost entirely comes down to Lane Johnson's health on Sunday. The veteran right tackle had his ankle cleaned out a few weeks back and has missed time at training camp. He's currently listed as questionable, but will likely try to give it a go against Washington. If he can play — and can stay healthy — that should go a long way toward helping the offensive line keep Wentz upright in this one.

That number above, though, is the one for if Johnson plays. If he doesn't, the over would be easy money here. That's because even if Johnson is out on the field, there are still concerns over the offensive line. Matt Pryor will likely get the start at right guard in place of Brandon Brooks, who tore his Achilles' this summer. Jason Peters was originally brought back to replace Brooks, but once left tackle Andre Dillard was also lost for the season, Peters returned to the position that made him a future Hall-of-Famer. It's going to be a cross-your-fingers-and-close-your-eyes type of situation in the beginning until we know whether or not this shuffling will actually work.

The Eagles also could've gotten a better matchup for their offensive line in Week 1. Not only will they likely still be finding their footing and cohesion, but they'll also be facing Ryan Kerrigan, second-overall pick Chase Young and the rest of a potent Washington defensive front. I really hope I'm wrong about this, but part of the reason I see the game being so close is Wentz not having enough time to throw, so I've got to take the over here even though I hope I'm wrong.

[UPDATE, 3:55 p.m.] — According to Adam Schefter, Miles Sanders (hamstring) will not be making the trip to Washington on Sunday and has been ruled out by the Eagles.

While that's terrible news for the Eagles, who will now have to rely on Boston Scott, Corey Clement and Jason Huntley in their opener, it looks like I'm an early 1-0 in my over/unders for the week.

Here's what I had written for him:

Sorry to all those who used a high fantasy pick on the Eagles second-year running back, but you may have to wait a week or two for the team to fully unleash Miles Sanders on the rest of the NFL after he missed most of training camp with a hamstring injury.

The good news is that Sanders practiced in a limited fashion for most of the week, meaning he has a chance to play on Sunday against Washington. Unfortunately, as head coach Doug Pederson hinted this week, the 2019 Offensive Rookie of the Year finalist could be on something of a pitch count as the team continues working Sanders back to full health. It's part of the reason we listed Boston Scott as a "start" in this week's fantasy start/sit column.

"I think it goes back to even last year when he missed some time and we managed him to get him ready to play," Pederson said. "I do think that is a possibility. We'll get him through this week, see how he does and see where he's at on Sunday."

Sanders is officially listed as questionable, and with a hamstring injury there's always a chance of it being aggravated at some point during the game. We fully expect the Eagles to use the hell out of Sanders this season, if their offseason comments and early looks at camp were indication. Unfortunately, that might not happen this week.

As a rookie, Terry McLaurin absolutely torched the Eagles. In their two games last season, the Washington wideout went for 10 receptions, 255 yards and a pair of touchdowns as the Eagles secondary struggled majorly against the oppositions' No. 1 wideouts. It's a big part of why they brought in a shutdown corner like Darius Slay, who can shadow the opposing team's top wideout and hopefully neutralize one of their big threats.

Last season against Slay, McLaurin had five catches for 72, slightly above his season averages of 4.1 receptions and 65.6 yards. But that's still far better than any Eagles cornerbacks did in 2019, and most importantly, Slay kept McLaurin out of the end zone.

If there's one player on Washington that Jim Schwartz and the Eagles defense needs to focus on in this one, it's McLaurin. And look for them to do everything possible — including trying to get to Dwayne Haskins early and often to throw him off his rhythm with his top receiver and prevent McLaurin from having enough time to get open deep down the field. Then again, that was their plan last season and McLaurin still burnt them — he had TD receptions of 69 and 75 yards against the Birds last year.

But this time around they have Slay, and hopefully that will be enough to slow down the deep threat. Unfortunately, for a guy like McLaurin, it may only take one reception to put him close to (or over) this total, as the Eagles well know. This feels like playing with fire — and I'll almost certainly be wrong — but...

When Jalen Reagor went down with an upper-body injury a couple of weeks ago, it looked like he was going to miss at least the first two weeks of the season. Then reports surfaced that his rehab was going well and he might only miss the opener. This week, however, the Eagles first-round pick was shockingly back out on field as a limited participant. And by the end of the week, he was a full-go at practice and his name had been completely removed from the injury report. He's going to play, and doesn't appear to have any limitations, which could be a huge boost to Wentz and the offense.

If the reports coming out of training camp were any indication, Reagor figures to be a big part of the offense in his rookie year. And we think that starts on Sunday against a team that will be paying way too much attention to DeSean Jackson, the guy who killed them in their last opener, and Zach Ertz, who also played well against Washington last season.

Like the players, the announcers are also facing a new challenge in 2020: not using the racist former name of the Washington Football Team. It's been easy to get rid of in print, but in the heat of live action, there's always a chance of a slip-up. You know that not saying R-----ns had to be an emphasis of production meetings and announcers Kevin Burkhardt and Daryl Johnston probably had that drilled into their heads over the summer. I'm still betting one slips by. Hell, I still call both the LA teams by the wrong city name all the time.