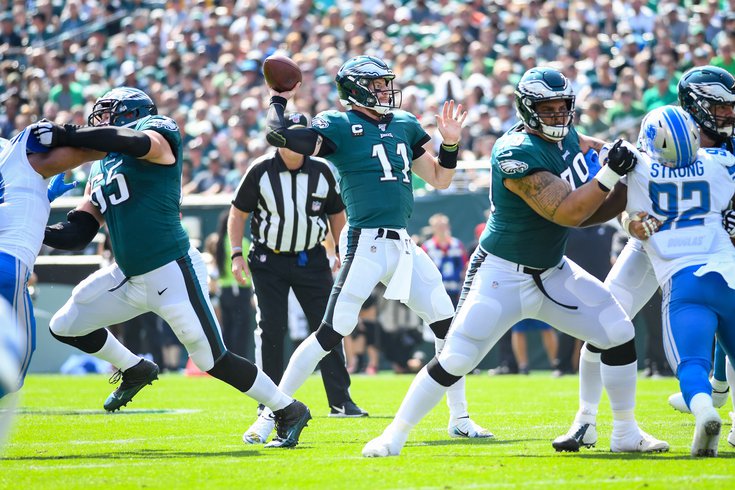 Should Carson Wentz be in your Week 1 fantasy lineup?

With so many injury concerns on so many fantasy football rosters — and that's before any games are even played — it's becoming pivotal that team owners pull the right levers each week when choosing who to sit and start.

Each week throughout the season, we'll provide an injury breakdown, a waiver wire watch and, as you obviously already know, a fantasy start/sit column to help ensure you make the right roster decisions each week. Today, we'll look at one player at each position who we recommend starting, and one we think should stay on your bench, in Week 1.

(NOTE: We won't be including guys like Ezekiel Elliott, Christian McCaffrey, or others who are obvious starts, week in and week out.)

START: Ben Roethlisberger, PIT (at NYG) — If you're debating starting Big Ben this week, then odds are you likely didn't go after a QB early in your fantasy draft. But, if he's on your roster, this is as good a week as any to plug him in. With aging quarterbacks, the early part of the season seems to be where you get the most value, and with Roethlisberger now 100% after a season-ending wrist injury last year, he's worthy of a Week 1 start against a Giants secondary that could be downright dreadful. They've had big offseason turnover at the position after a rough outing in 2019, and as they continue to rebuild, there's no way they can be trusted at this point.

SIT: Carson Wentz, PHI (at WAS) — This has far less to do with Carson Wentz than it does with the players around him, specifically the ones charged with keeping him upright and giving him time to throw. Wentz has played well against Washington, especially in last season's opener when DeSean Jackson was fully healthy — and there's certainly a chance he could have another good game. But Washington has a legit pass rush, and there are more questions along the Eagles offensive line than there have been in recent years. Without any preseason games to see how they'll hold up against actual competition, it's too early to trust them. Maybe with a good showing against the Football Team will calm our fears, but until then, we're being cautious with the Eagles quarterback. Oh, and did we mention the Birds will be without Jalen Reagor, Alshon Jeffery and Miles Sanders, a favorite target of Wentz last season, may be limited in his workload.

UPDATE — It appears Jalen Reagor (surprise!) will play on Sunday, which gives Wentz another weapon at his disposal.

START: Boston Scott, PHI (at WAS) — Wait, you're concerned about the Eagles offensive line and are suggesting I start one of their running backs? Valid concern, reader. But the issues I have with the O-line is more about their pass protection than run blocking, and with Miles Sanders likely on a snap count this week, if there was ever a week to play Scott, it's this one. He only had six carries for 26 yards in their Week 15 matchup last season, but he also caught seven passes in that one. If Wentz needs to start getting the ball out quick on Sunday, Scott could be featured heavily in the passing game again with Sanders limited, so he's an even better play in PPR leagues.

UPDATE — Miles Sanders has officially been ruled out for Sunday's game against Washington. Absolutely start Boston Scott if you've got him.

SIT: Leonard Fournette, TB (at NO) — The Bucs' recent acquisition may have been a splashy signing, but there's no guarantee he makes a similar impact on the field. At this point in his career, it's all about touchdowns for Fournette, so he could still have a big day with very limited touches, but with him already behind Ronald Jones and fighting with LeSean McCoy for the remaining carries, it's likely too soon to really trust anyone in that backfield. And with Tom Brady under center, there's no reason to think they're suddenly going to turn into a run-first team.

START: T.Y. Hilton, IND (at JAX) — With a new quarterback under center in Philip Rivers, this could be a big season for T.Y. Hilton, who missed six games last season with an injury. Now fully healthy, the veteran receiver will look to again prove that he's among the league's best, and gets a favorable Week 1 matchup against a Jaguars team that once boasted one of the league's top defenses but is now simply a team that's rebuilding (again). In other words, he won't have to face Jalen Ramsey anymore.

SIT: Amari Cooper, DAL (at LAR) — T.Y. Hilton might not have to deal with Jalen Ramsey this weekend, but Cowboys No. 1 wideout Amari Cooper will. Between that, and the numerous other options for Dak Prescott, we're low on Cooper this week and think the better value might be with a player making his NFL debut: CeeDee Lamb.

START: Blake Jarwin, DAL (at LAR) — One beneficiary to Amari Cooper battling with Jalen Ramsey could be Blake Jarwin. The Cowboys tight end could thrive against a Rams defense that gave up touchdowns to tight ends in each of their final three games last season and is now without Corey Littleton.

SIT: Austin Hooper, CLE (at BAL) — Remember how I just said the Rams gave up three touchdowns to tight ends in three straight games last season? Well that's the same number as the Ravens defense allowed to tight ends for the entirety of the 2019 season. So, yeah, this is a terrible matchup for Hooper.