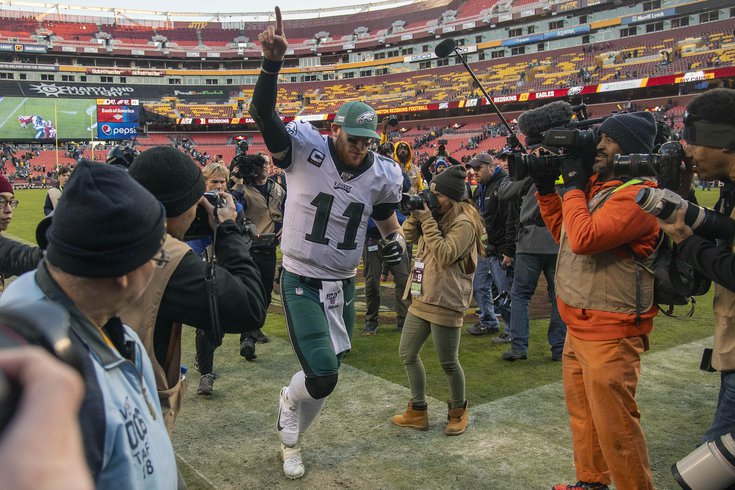 The Eagles are 4-0 in Week 1 games in the Doug Pederson era.

For the gambling enthusiasts, here are my Week 1 NFL picks. To note, the team logos indicate who I think will win the game, not cover the spread. At the end of the picks, I'll note a few teams that I like based on the spread. All the below spreads are courtesy of the consensus Week 1 odds at TheLines.com.

We'll also note which teams will have fans in the stands for each game, via The Washington Post.

Texans at Chiefs (-9): This is a fun opening night matchup between two of the most entertaining quarterbacks in the NFL in Patrick Mahomes and Deshaun Watson. Mahomes has the far better supporting cast. Next.

Eagles (-6) at Football Team: Doug Pederson and Jim Schwartz have proven that they are able to have their team ready to play Week 1, as the Eagles have started 1-0 in each of the last four years. They've also been successful against Washington, sweeping their division rival in each of the last three years:

That would be a combined score of 185-108 in favor of the Eagles in the last six matchups between these two teams.

This Washington team, however, is going to be tricky to prepare for, as they have a new coaching staff, and a number of rookies in prominent roles, such as No. 2 overall pick Chase Young, and third-round starting running back Antonio Gibson.

The matchups generally favor the Eagles, who still have a playoff-worthy roster, while the Football Team has a looooong way to go before they'll seriously contend. The one matchup that should worry the Eagles is their offensive line against a very good, emerging Football Team defensive line that is heavy on talent and depth.

Ultimately, however, the Football Team is far too light on offensive weapons, and the Eagles should be able to outscore them.

Fans or no fans? The Eagles lose a home game here, as there will be no fans.

Packers at Vikings (-2.5): The Packers feel like they're in for some serious regression from their 13-3 season a year ago, and I believe that will begin Week 1 against a more talented Vikings team.

Bears at Lions (-3): All offseason long, a lot has been made of how well Matthew Stafford played last season, before he got hurt. While I agree with that sentiment, he also only went 3-4-1 in the games he started, with those three wins coming against the always disappointing Chargers, the garbage-ass Giants, and an Eagles team that blew the game on a dropped touchdown. Ultimately, there's only so much Stafford can do, and his career is wasting away in a crap organization with an awful head coach.

The Bears aren't exactly a team to get fired up over, either, since Mitchell Trubisky is somehow still their starting quarterback. But at least they have a decent roster otherwise. Lions by 3 strikes me as an odd line.

Colts (-7.5) at Jaguars: Nobody wants to play in Jacksonville, as players are forcing their way out in droves. They do have a lot of picks in a 2021 draft that is going to be harder to prepare for than perhaps any other year. So at least there's that.

Raiders (-3) at Panthers: I hate hitching my wagon so early to the freaking Raiders, on the road no less, but the Panthers have the potential to be like a 2-14 team this year. I feel like this might be the only time you'll see a line this low on the Panthers, so I'll (perhaps unadvisedly) lay the 3 points, I guess.

Jets at Bills (-6.5): In doing our Eagles power ranking roundup this week, I found that the Bills are pretty consistently landing in the top 10. I mean, I like the Bills' defense and I think Sean McDermott is becoming a good head coach, but... come on. They should take care of the Jets, though.

MORE: WTS: An Eagles power struggle, season predictions and a breakout candidate | Podcast: Injuries, roster quibbles, and an Eagles vs. Football Team preview | With leadership questions behind him, the Eagles are Carson Wentz’s team now

Seahawks (-2) at Falcons: Ooooh, Seahawks have to play a 1:00 p.m. EST game on the road. Advantage Falcons, amirite? Yeah... no. If you'll recall, after the Eagles and Seahawks got flexed out of their Sunday Night Football spot Week 12 last year, the NFL moved that game all the way to 1:00 p.m. My initial thought was, "Oh, that's good for the Eagles." After researching it, not so much.

The Seahawks have won 7 straight 1:00 p.m. EST road games, so I don't think the Eagles have just gained a big advantage by that game being flexed out of prime time.

Dolphins at Patri*ts (-6.5): After the Patri*ts got caught cheating... yet again(!)... they received the laughably light sentence of the loss of a third-round pick (meh), a million bucks (who cares?), and their TV crew not being allowed to shoot games during the 2020 season (lol!). Their punishment is essentially, "No cheating in the way you've been caught cheating twice already, guys, but for only one year."

Surely emboldened by the NFL's continuous failure to punish the Patri*ts in an appropriate, cheating-discouraging way, the Patri*ts will no doubt figure out ways to use the pandemic to their cheating advantage. Because why not?

Chargers (-3.5) at Bengals: Ooh, this line looks very tempting. No, wait, you'll not fooling me again this year, Chargers. I'll pick you to win, but you've burned me too many times to put money down.

Buccaneers at Saints (-3.5): From 2014-2018, the Saints were slow starters, as they lost five straight Week 1 games, some of which were to some pretty bad teams. They finally broke that trend last year, when they beat the Texans. Still, in case you were thinking about them for a survivor pool pick (and I don't know why you would anyway against Tom Brady), don't. Wait until around Week 4 or 5 to use the Saints.

Anyway, this is one of the more intriguing matchups of the Week 1 schedule, since the Bucs and Saints are the top two contenders in the NFC South. The Saints are just... better... so we'll go chalk here.

Cardinals at 49ers (-7): As we mentioned in the hierarchy, the Cardinals feel like that improved but over-hyped team. I believe this game will be a reminder that they still have a ways to go.

Cowboys (-3) at Rams: Like the Eagles, the Cowboys have serious offensive line concerns heading into Week 1. Still, they'll find enough ways to score against a Jared Goff-led Rams team that doesn't inspire much confidence.

Steelers (-5.5) at Giants: The Steelers managed to go 8-8 last season while getting dreadful quarterback play from Mason Rudolph and that duck guy. If Ben Roethlisberger can merely be competent at this stage of his career, Pittsburgh should win more games this season.

Meanwhile, the Giants have won just 12 games in the last three seasons, one-third of which have come against Washington.

Titans (-1.5) at Broncos: Including the playoffs, the Titans' defense held opposing teams to 20 or fewer points 12 times in 2019. They're becoming one of those classically-built teams that plays good defense and just hammers the run with a big, powerful back. While I wouldn't necessarily want to build my team that way in the modern NFL, it can work, especially in a pandemic-shortened offseason. By that I mean, logically, it should be easier to execute a run-heavy attack that plays good defense than it is to run a timing-based passing attack, for example.

The Broncos, meanwhile, got a bad break this week, when Von Miller went down, perhaps for the entire season with a weird ankle ligament injury.