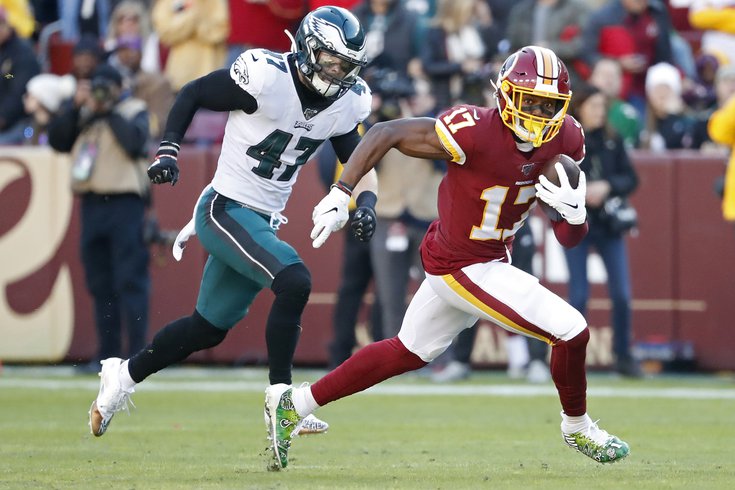 This is Terry McLaurin. He's good. The Eagles should cover him.

The Philadelphia Eagles will head south to beautiful, luxurious Landover, Maryland this Sunday to kick off their 2020 season against the Washington Football Team. Currently, the Birds are 6-point favorites to win their opener, according to consensus odds at TheLines.com.

Last year, before the Eagles' second matchup against the Washington team, we included the following memo to Jim Schwartz.

This Sunday, give whatever extra attention you need to give to rookie wide receiver Terry McLaurin, so that he doesn't single-handedly beat your defense. This is him, to the right. See him? That's what he looks like. He's number 17. He's waving to you. Make sure your secondary covers that guy. Jim, no! Stop looking at Adrian Peterson! BAD! He doesn't matter. Seriously, cover No. 17. He's what matters. Got it? OK, good.

The Peterson part aside, that messaging remains the same, as the Washington team has no other "definitely good" players on offense.

As I'm sure you all remember, McLaurin went off against the Eagles Week 1 last year, when he had 5 catches on 125 yards and a TD, including this 70-yard bomb:

In the second matchup, despite my memo to Schwartz, McLaurin once again torched the Eagles, catching 5 passes for 130 yards, and another long TD.

Over his career, new Eagles cornerback Darius Slay has prided himself on following the best receiver on the opposing offense, no matter their size, speed, skill set, or whether they play inside or outside.

In his four years as the Eagles' defensive coordinator, Jim Schwartz hasn't often asked any particular corner to follow a specific receiver, mainly because he hasn't had a corner as good as Slay, but also because it then becomes more difficult to disguise man vs. zone coverages when you do that.

Back in July, Jim Schwartz was asked if he planned on allowing Slay to follow the opposing offense's best receiver this season. He gave a long, great answer that you can go check out if you're interested, but the short-short answer is... sometimes.

McLaurin is the exact type of receiver that Slay should be following, as he did last year when he played for Detroit. In fact, we cut up all of Slay's targets last season, and you can find his targets against the Washington team at the 6:23 mark below:

McLaurin had 10 targets while being covered by Slay in that game. He had 3 catches for 42 yards. There were some wins by Slay, some losses, and some bad misfires by Dwayne Haskins. There were some games (like both Vikings games, for example) where Slay's coverage stats looked worse on paper than his actual performance on the field. This game was the reverse of that.

Asked what he saw in that matchup, Schwartz said he didn't really pay any attention to it. 🤥

"I really didn't spend a lot of time on that because Detroit plays a different scheme than we play, and we're going to employ Slay a little bit different and stuff like that," he said. "There is some carryover to our games last year and then also individual matchups, but we're in a new year this year. We're going to be ready for however they deploy their guys, and I'm excited about all our guys. I think we have some good matchups in this game."

Expect Slay to follow McLaurin at times, but Schwartz would be wise to also give Slay a little extra help.

2) The Eagles' run defense vs. Washington's running back quartet

In 2019, the Eagles did a nice job on the Football Team's running backs.

I actually believe Gibson is a more dangerous player than Peterson, who was a known quantity, and a below average starter at this point in his career. Gibson is more of an enigma.

"We did go back and watch the way he played last year at Memphis," Schwartz said. "He's a little bit different than some of these other guys that have been that running back/wide receiver, because generally they might be a little bit on the lighter side and things like that.

"This guy is a 6-foot, 230-pound type guy with explosive straight line speed. We have to respect him whether he’s lined up at the running back position or lined up at a wide receiver position. And when he is in the open field, you know, we're going to have to do a good job tackling and maybe even gang tackling, because we're not talking about a 180-pound or 190-pound guy. We're talking about a guy that's probably around 230 pounds on Sunday and has the speed, if he can make you miss to go the distance, but also could use his power and try to run guys over.

"So he's a little bit different. But we would expect him to certainly have a big role, and we're sort of just speculating on how they would use him. But we'll figure it out on Sunday."

2) Bryce Love: Love was a home run hitting running back with explosive speed who was an early Heisman candidate at Stanford in 2017, when he racked up over 1,100 yards in just his first five games.

Washington took him in the fourth round last year, and redshirted him. He'll have a role in their offense in 2020.

3) JD McKissic: McKissic is a third down back with receiving ability, who caught 34 passes for Detroit in 2019.

4) Peyton Barber: Bigger back, who was unproductive for the Bucs last year.

It's an interesting, but mostly inexperienced group with varied skill sets.

3) The left side of Football Team's OL vs. the right side of the Eagles' DL

In Football Team training camp, a trio of offensive tackles were competing for the starting LT job. They were Geron Christian, Cornelius Lucas, and rookie Saadhiq Charles.

The Football Team listed Christian as the starting LT, and while that's "unofficial," we'll just go with it. Christian was a third-round pick of the team who once upon a time felt deflated because the offensive tackle starters were in place, and so he didn't work as hard as he should have.

Christian says when he first came here he did not prepare the way he needed to. Saw Williams, Moses and didn’t think he’d play. “Should have been more aggressive,” Christian said. “I should have prepared harder. ... it wasn’t that I didn’t have the talent, it’s just a mindset.”

I admire the honesty and the self-awareness, but... 😬. Charles has a mere 189 career snaps played. He'll be paired on the left side with Wes Martin, a 2019 fourth-round pick who played 290 snaps as a rookie, and struggled.

The Eagles have to take advantage of those matchups, with Derek Barnett or Josh Sweat (or both) at RDE against Christian, and with their strong DT rotation against Martin.

Washington's starting corners are likely to be Ronald Darby (you know him well), Kendall Fuller (who played safety last year for the Chiefs), and Jimmy Moreland (a promising, but poor tackling young slot corner).

It's too bad for the Eagles that Jalen Reagor will miss this matchup, as he could do damage with yards after catch opportunities against Darby and Moreland.

Regardless, this is a group of corners the Eagles can have success against. DeSean Jackson and Greg Ward will likely be Carson Wentz's go-to guys at receiver, but it would also be nice to see production in real games from J.J. Arcega-Whiteside and John Hightower, who both had stellar camps.

You knew we were getting to this one, as it is easily the most concerning matchup for the Eagles Week 1.

Under the Bruce Allen regime, the Washington team built a solid defensive front with high picks. It's one of the only positive things he did in his disastrous regime as GM.

In 2020, the Football Team drafted Chase Young second overall. Young was the best prospect in college football, and many draft analysts have referred to him as the best pass rushing prospect they've ever studied.

Add in veteran borderline Hall of Famer Ryan Kerrigan, improving 2017 second-round pick Ryan Anderson, and productive hustler Matt Ionnidis, and Washington really has something up front. They're going to be tough to block for years to come.

Meanwhile, the Eagles, for the first time in a long time, have serious offensive line issues heading into a season. Jason Peters finally decided to move back to LT, allowing the Eagles and their fans to breathe a big sigh of relief, and setting up a starting five that will likely look like so:

Doug Pederson did leave the door open for guys like Nate Herbig or Jack Driscoll to win the starting RG job. There are several concerns with the Eagles' OL:

"This is a talented group up front," Pederson said. "You know, a lot of first round draft picks and talented guys in that mix, not only the D-Line but linebackers, as well. We definitely have our work cut out for us protecting against this front four, front six, front seven-type guys, and it's a group, too, that we know, they are going to rotate guys and they are going to keep guys fresh and healthy.

"Chase, we just kind of have to go off what he did in college and study his college tape to get a feel for him as a pass rusher, as a defensive end, an edge setter and go play. And then make those adjustments as we go.

"You're not sure if he's going to be on our right or our left but at the same time, we have to go play and execute and do our jobs and stay within our rules and all of that, and do the best we can against that. And like I said, in-game adjustments are going to be important in games like this."

If there's one way that Football Team can win this game, it's if their defensive line makes big plays and creates turnovers.