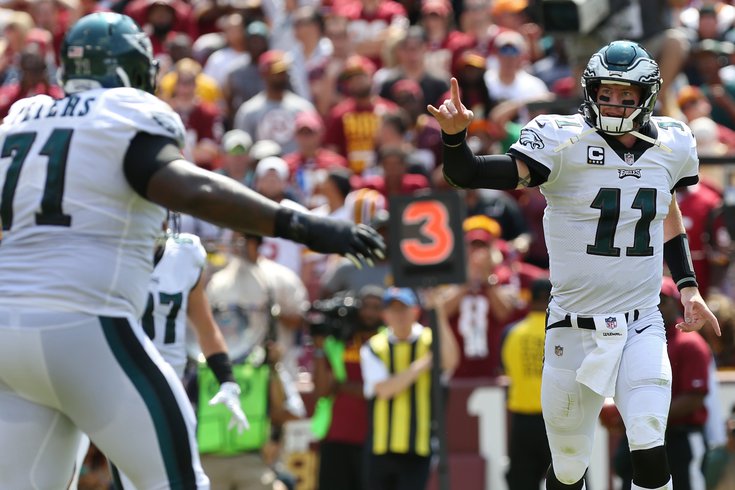 With Jason Peters back at LT, Carson Wentz and the Eagles should be OK... for now.

Anyway, it's my hackneyed sell-out spin on the more traditional "power rankings." Got it? Cool. It's back for another season.

16) Panthers (5-11 in 2019): The Panthers are going to field a secondary this season that includes a fourth-round rookie (Troy Pride), a journeyman safety with only nine career starts (Juston Burris), and a rookie at big nickel (Jeremy Chinn). The first guy off the bench at corner is probably going to be Rasul Douglas.

That's a group that is going to have to face a trio of experienced quarterbacks in Tom Brady, Drew Brees, and Matt Ryan, who have receiving duos like Mike Evans / Chris Godwin, Michael Thomas / Emmanuel Sanders, and Julio Jones / Calvin Ridley.

They're a pretty solid bet to lead the league in passing yards allowed.

So there are more pros than cons, I guess, which is encouraging.

14) Giants (4-12 in 2019): I enjoyed the daily updates from the Giants' high school camp, where Joe Judge seemed to have a new trick up his sleeve on the daily, whether that be making players and coaches run laps, stripping names off of jerseys, getting guys hurt while running some version of an Oklahoma drill, or gathering the team around to scream at them before making them practice an extra half hour.

This is going to be Judge at halftime against the Steelers Week 1:

I look forward to when he bans locker room music.

13) Lions (3-12-1 in 2019): The Lions have become sort of a trendy pick to win the NFC North, on the premise that Matthew Stafford was awesome in 2019 before he got hurt. That's fine, except that the coaching staff is horrendous. For example:

In his breakdown with @BaldyNFL, Davante Adams said the #Lions never disguise coverage. Adams watched 200 clips and Darius Slay never followed WRs if it was zone but always did in man.

Said he even told Slay he knew that 😂

This is true. Earlier this offseason, I watched all of Slay's 2019 snaps, and if he was on the other team's best receiver, it was man. If was lined up anywhere else, or if he was in off coverage, it was zone. They had to be the easiest team in the league for veteran quarterbacks to just absolutely pick apart last season.

Stafford could be Joe Montana this season, and it still won't matter when they're so badly overmatched, schematically.

12) Bears (8-8 in 2019): You can probably count on one hand the number of head coach / starting quarterback combinations that I wouldn't take over Matt Nagy and Mitchell Trubisky. Actually, let's go ahead and count them, because why not:

So scratch that, I guess. You can only count on one finger.

After having watched Nick Foles in a bunch of training camps, and knowing what kind of unimpressive training camp quarterback he can be, it's maybe not so surprising that Trubisky beat him out for a starting job this summer. In real games, however, I'll take Foles over Trubisky all day. It's odd to me that a guy like Nagy, who has seen Foles in plenty of training camps himself, wouldn't also see that.

The Bears play a couple of horrendous defenses -- the Lions and Giants -- the first two weeks of the season, so maybe Trubisky can give the city a little early false hope. But they're not going anywhere.

11) Falcons (7-9 in 2019): Since choking in the Super Bowl, they have gotten progressively older and worse in every subsequent season, and seem to think that things are magically going to turn around sticking with the same roster, which oh by the way, is now the oldest in the NFL.

10) Cardinals (5-10-1 in 2019): The Cardinals are this year's "new hype" team. By that I mean they're the team that hasn't been good in a while, but some are predicting big things for them in the upcoming season.

Usually it doesn't work that way. The 49ers, for example, were that team in 2018, but it took one more year for them to really get over the top. The Browns were that team recently too, and they still haven't found their footing. The Cardinals will certainly win more than five games this year, but asking for, saaaayyy, an increase of five or six wins year over year is a lot to expect.

9) Rams (9-7 in 2019): Conversely, the Rams have sort of become the "no hype" team that has been good recently, but many have cooled on, as they have mismanaged their roster, and their head coach no longer seems like God because he can name players on the opposing defense.

Their Super Bowl contending days are probably over, but it's still a dangerous enough team with good skill position players and a few legitimately elite defenders.

8) Buccaneers (7-9 in 2019): In one offseason, the Buccaneers went from the second-youngest team in the NFL to the seventh-oldest. Obviously, the additions of Tom Brady and Rob Gronkowski were a big part of that.

Still, the Bucs had the second-best injury luck in 2019, according to FootballOutsiders. Given the obvious logical injury-to-age correlation, it's unlikely they're going to have that same luck in 2020.

7) Cowboys (8-8 in 2019): Because of the Eagles' offensive line concerns, I had bumped Dallas up briefly, until I realized that they have some pretty significant offensive line issues of their own, with RT La'el Collins going on IR.

LT Tyron Smith and RG Zack Martin are still very good players, so no worries there, but the other three spots?

• LG Connor Willliams: Tore his ACL during the Cowboys' loss to the Bills on Thanksgiving last year. He wasn't great before that injury, and now he's only nine and a half months removed from it.

• C Joe Looney: The Cowboys went from one of the best starting centers in the league in Travis Frederick to one of the worst in Looney.

• RT Cameron Erving: Former first-round pick, who busted in Cleveland, and has bounced around since. He'll easily be the Cowboys' biggest concern heading into Week 1. This tweet made me legit lol:

Full scouting report on Cam Erving: good swing tackle unless he has to play. Then he is not a very good tackle based on last few seasons.

And then even Smith is maybe worth watching from a decline standpoint. He turns 30 this year, which isn't that old, but already has 131 career starts because he entered the league at a very young age. Only four active offensive tackles -- Andrew Whitworth, Jason Peters, Duane Brown, and Anthony Castonzo -- have more career starts.

6) Eagles (9-7 in 2019): Now that Jason Peters has decided that wrecking the Eagles' season isn't worth staying at a position he probably doesn't really want to play anyway, the offensive line should be fine-ish, for now.

Of course, the reserve offensive linemen have a grand total of three career combined snaps. So that's not great, considering Peters gets hurt every year, Johnson hasn't practiced in like three weeks, and Kelce will turn 33 in a couple months.

The receivers, secondary, and D-line should be better, though.

But... I still just can't shake the image of the 49ers running the ball down the Packers' throats for four quarters in the playoffs last year. It's one of the softest playoff performances I've ever seen, and they didn't really get any better on defense this offseason.

4) Vikings (10-6 in 2019): The talk that I've seen surrounding the Vikings, from a year-to-year standpoint, is that rookie first-round pick Justin Jefferson has big shoes to fill, with Stefon Diggs heading to Buffalo. OK, fine, but that was an outstanding deal for Minny. Here's what they got by trading Diggs:

In other words, for Stefon Diggs and a 7, they got a 1, two 4's, and a 5. That's a no-brainer for a player who seemed unhappy in Minnesota.

With that added draft capital, it became easier trading a 2 for Yannick Ngakoue, who will combine with Danielle Hunter to form a pass rush duo that is at least in the "best edge rushers in the NFL" conversation. Getting Ngakoue to take a pay cut on top of that was some impressive front office work by the Vikings. Ngakoue and Hunter are going to expose some teams that don't have a pair of good offensive tackles.

So, I get why you would want to be a run-heavy team when the Seahawks had one of the best defenses in the NFL. But that's not what they are anymore. Wilson is a top three quarterback. Let him throw it.

Anyway, that aside, the Seahawks are more likely than not going to the playoffs as long as they employ Wilson.

Six missed the playoffs the next season, and only five went back.

It'll be easier to get back to the playoffs with a seventh team having been added, but the while the Niners have a great roster and a good coaching staff, they probably have the worst starting quarterback in the NFC West.

According to the NFLPA's public salary cap report, the Saints have juuuust a hair under $10 million in cap space. According to OverTheCap.com, they're already scheduled to be about $70 million over the 2021 cap. And still, they were like, "You know what? Screw it. We can't afford Jadeveon Clowney, but let's go get him anyway. We'll get the Browns to sign Clowney with a signing bonus that the Browns will eat. We'll then give them a second-round pick for Clowney for their troubles, and we'll use all of our remaining 2020 cap space to pay the rest of Clowney's salary. Boom."

But the league said no. Anyway, that's a team that just couldn't give a flying rat's ass about the future. I imagine they'll be all in on somebody at the trade deadline, assuming they're good again the first half of this season.