Jason Peters will be the Eagles starting left tackle after all 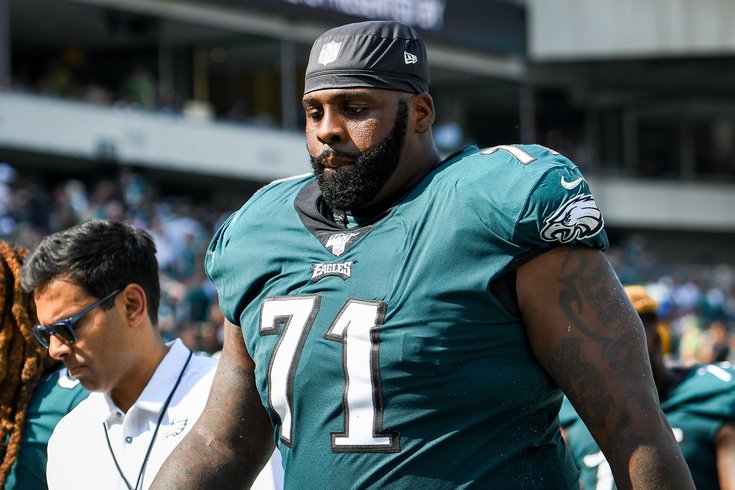 The Eagles were in a precarious position with less than a week remaining before the start of the season.

After losing Brandon Books to an Achilles' tear, the team re-signed future Hall of Fame left tackle Jason Peters  to play a new position in place of their injured Pro Bowler. However, during training camp, Peters remained at right guard due to reported contract demands, and instead left tackle reps were given to much more unproven players like Matt Pryor and Jordan Mailata.

The Eagles were in a position where they had a young, inexperienced player protecting Carson Wentz' blindside while having a 38-year-old vet playing a new position for the first time on the right. And given the importance of the quarterback, that's not exactly an ideal situation heading into a season in which you have playoff aspirations.

Well, that outlook changed for the Eagles on Monday morning, when Peters marched into Doug Pederson's office and told the coach that he would be lining up at the left tackle spot moving forward. The Birds head coach was asked about the team possibly bringing in Cordy Glenn, who had a workout for Philly last week, and whether or not they'd feel comfortable slotting him in at left tackle with just six days to go before the opener, should they sign him.

And that's when Pederson dropped some news to the reporters on the other end of the Zoom call.

"As it pertains to our left tackle," Pederson said, "I can actually share some news with you that Jason Peters actually came into my office this morning and he has decided to slide over to left tackle. And this is, listen, this is the unselfishness. This is who he is. When we talk about guys, and we talk specifically about Jason Peters, this is who he is. He sacrifices not only his body, but for the football team. And he did an outstanding job for us at right guard. It was valuable experience for him to play over there on the right side and get some interior work. But as he looks at not only where we are, but where he is, he came in today and he was excited about playing left tackle. So I can announce that. I'm thrilled to death."

In addition to being thrilled, Pederson was also surprised by Peters' decision to change positions.

"I had not expected this," Pederson admitted. "I mean, we continued to talk to Jason and all that, but listen, we were comfortable with him at right guard. We had made plans to move forward and get ready for the season that way, so it's just one of those pleasant surprises that we had all hoped would come true."

That surprise likely stems from reports that Peters was demanding a pay raise to move to a more taxing position after originally signing up to play guard. Pederson more or less denied those reports to be true, but it was hard for anyone on the outside to imagine that the Eagles did not broach the subject of a position change with Peters, which naturally led to wondering why, then, Peters hadn't yet made the move.

"First of all, I don't understand where some of these reports are coming from," Pederson said last week. "Jason Peters for us has done an outstanding job at right guard. He's comfortable at right guard. We have some options at left tackle that we're working through over there."

Pederson added that if a conversation asking Peters to move was going to take place, that it would be a private one. But after a week-plus of seeing some of those options to replace Dillard, it appears it was Peters who had seen enough, not the coach, and the veteran lineman tossed away those contract demands — if they were even real to begin with — and told his coach he was ready to move back to the position he dominated for well over a decade.

"Obviously, he knocked, and it's a big man walking through my door," Pederson said of his impromptu meeting on Monday. "And I was happy to see Jason Peters. I was just thrilled to death when he shared the news. You know, I'm not going to get into any of the contract stuff. That's not my area. But I was excited when he shared the news that he was moving over to the left side — I was thrilled.

"I couldn't have been happier, not only for him, but for our team. It just shows a sign of great leadership by him and I gave him a hug and said, 'Let's go.'"

Later, Mike Garafolo confirmed that Peters' move does not come with increased by, but the use of the word "before" in this tweet is curious. Could one be coming later?

From NFL Now on @nflnetwork: The #Eagles have praised Jason Peters' team-first mentality in recent days and he proved it today by sliding out to left tackle before any reworking of his contract. pic.twitter.com/O8x72xafWA

With the Eagles seemingly now having left tackle figured out — at least for this season — that leaves them back where they were before camp started: with a Brandon Brooks-sized hole to fill at right guard. Pederson believes they'll be able to figure that out in time, especially since they have a guy there who has some starting experience in the past in Matt Pryor, whose only start came in the wild-card loss to the Seahawks after Brooks injured his shoulder in the regular season finale. He has played just 79 career snaps on offense, but it's better than nothing.

They also have to get Peters back used to playing on the left side of the line, although for someone with his experience, that shouldn't be a tough ask.

"First of all, we've got to get J.P. caught up," Pederson said. "He is comfortable there, but we've got to get him caught back up with the terminology and working with [left guard] Isaac [Seumalo] again and all of that. So that's kind of the first thing. At right guard, Matt Pryor is an option there. We do have some other, younger players there. [Nate] Herbig has been working in there, [Jack] Driscoll has been working in there. So we've got some options at the right guard position. But this move with Jason Peters really kind of solidifies that left side for us and really puts us in a little better position moving forward."

It's certainly not the way the Eagles saw their offensive line situation playing out when they opted to let Peters walk in free agency, but all things considered, this move should go a long way to helping keeping Wentz healthy and upright this season. And they won't have to wait long for their first real test, as a date with Washington and their tough defensive front awaits in six days.