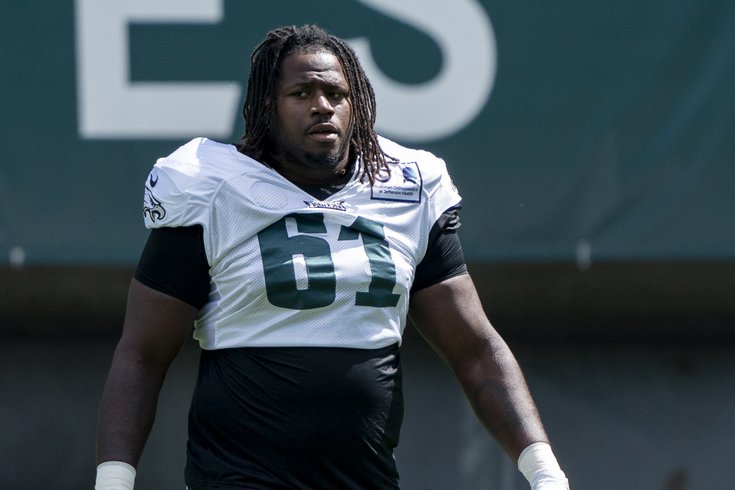 The Philadelphia Eagles' initial 53-man roster is set (actually, there have already been changes to it), and now they have also announced their initial 2020 practice squad.

Practice squads across the NFL will have higher importance in 2020. Because of COVID concerns, they were expanded to 16 players, which can include as many as six veterans (with no limit on their number of accrued seasons).

Teams will have the option of elevating up to two players from their practice squad to the active roster during game week. The deadline to do so will be at 4:00 p.m. the day before a game. Those players could then be sent back to the practice squad the day after the game without having to go on waivers.

Anyway, here are the guys who are on the Eagles' 2020 practice squad:

• QB Josh McCown: McCown won't even be in Philly this season. He'll hang out at home in Texas, and serve as something of a coach / emergency quarterback, while continuing to remotely give guidance to Carson Wentz. Our Matt Mullin covered McCown's inclusion on the practice sqaud earlier today.

• RB Elijah Holyfield: Holyfield was the likeliest of the three waived running backs here to make the roster. Instead, the Eagles went light, keeping only three backs on their 53-man roster. Holyfield would be the first call-up, should someone get hurt, and assuming they don't add a back from another team.

• RB Adrian Killins: Killins has excellent speed, but his skills need refinement and his body could use a little more muscle before he could play in a real game. His best chance at cracking the 53-man club at some point will be to become a reliable returner, but he is a player worth developing.

• RB Michael Warren: Warren didn't stand out in any way in camp, and it's perhaps a little curious why the team would keep three running backs on the practice squad. Perhaps because Killins maybe can't give real, between-the-tackles RB reps in practice, but Warren can? He feels like pure practice-only guy.

• WR Deontay Burnett: With the team activating Alshon Jeffery, thus keeping 7 receivers, there was no room left for Burnett, who had a standout camp. The Eagles are fortunate that he didn't get claimed.

• WR Travis Fulgham: Fulgham was a late add to the team during camp, but he showed a little something, making his share of catches. He's a bigger guy, at 6'2, 215.

• TE Caleb Wilson: With Noah Togiai having been claimed by the Colts on waivers, Wilson is the next TE up, for now.

• OT Prince Tega Wanogho: Wanogho is an ideal type of player you want to be able to develop on a practice squad. He was the only rookie draft pick not to make the roster, but he does possess some upside at an important position.

• OG Sua Opeta: Opeta spent some time on the Eagles' roster last year. The Dolphins attempted to poach Opeta off of the Eagles' practice squad, but the Eagles instead elevated him to the active roster.

• C Luke Juriga: Juriga received a guaranteed salary of $116,000 during the undrafted free agency phase of the draft, so he was all but assured at least a spot on the practice squad.

• DE Joe Ostman: There's really no justification for Genard Avery to have made the 53-man roster over Ostman, but the Eagles were fortunate that Ostman wasn't claimed on waivers, so he'll return for another season.

• DE Matt Leo: Leo won't count toward one of the practice squad spots, as he is roster-exempt.

• DT Raequan Williams: The Eagles had a draftable grade on Williams, but he did not stand out in camp. He'll have the opportunity to develop behind a very good DT group on the main roster.

• CB Trevor Williams: Williams is a veteran corner with 39 career games played, and 27 starts. He's a nice player to have on hand in an emergency role, and should give the WRs good practice reps.

• S Grayland Arnold: Arnold isn't the fastest or biggest guy, but he has good instincts, and he was physical in practice. They'll continue to develop Arnold, who has a legitimate chance of cracking the roster at some point down the road.

• S Elijah Riley: Riley also showed something in camp at safety, making a number plays on the football. Like Arnold, he had a productive college career, and has a chance to grow into a back-of-the-roster player down the line.

The Eagles have one empty practice squad remaining spot to fill.