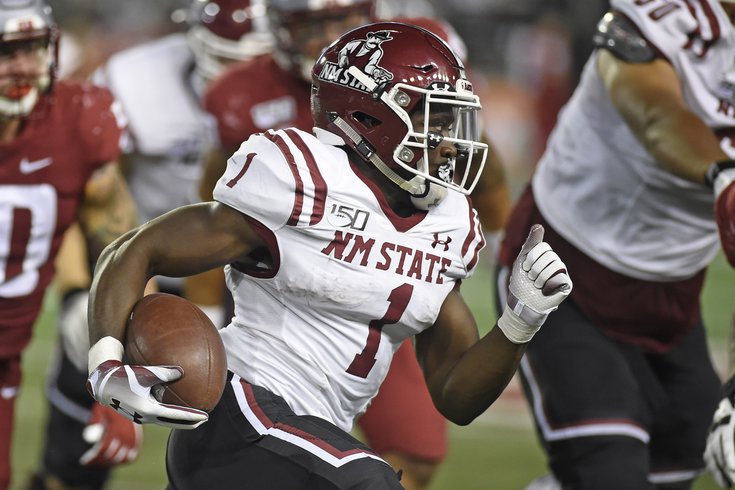 According to the NFL's transaction report, the Philadelphia Eagles have claimed rookie fifth-round running back Jason Huntley off of waivers from the Detroit Lions.

A few Eagles cuts were claimed by other teams around the league.

Huntley was a player we profiled in our Grocery Shopping series last year. His appeal is his receiving ability out of the backfield, as well as his added versatility as a returner. His career numbers at New Mexico State:

Huntley had 59 career kick return attempts in college, averaging 25.8 yards per attempt, with 5 TDs. Oddly, he didn't have any punt return attempts, which is curious considering his impressive acceleration, start-stop traits, and ability to catch the football, as you'll see in his college highlights:

The Eagles will have to waive a player to make room for Huntley. As for the Eagles' releases who were claimed by other teams:

• CB Rasul Douglas: The Eagles seemed willing to move on, and it was likely Douglas would land somewhere.

• DE Shareef Miller: Again, when you cut a guy who was a fourth-round pick a year ago, there's a decent chance some other team will see what he can do.

• TE Noah Togiai: This is perhaps a player the Eagles should have kept on the 53, and will regret cutting. Togiai showed legitimate promise, and the Eagles likely thought they'd be able to bring him back to the practice squad.

MORE: Eagles seemingly in the process of forming half of their practice squad | Analysis of the Eagles' initial 53-man roster after final cuts | Ranking NFL teams by age after 53-man cutdowns: 2020 edition