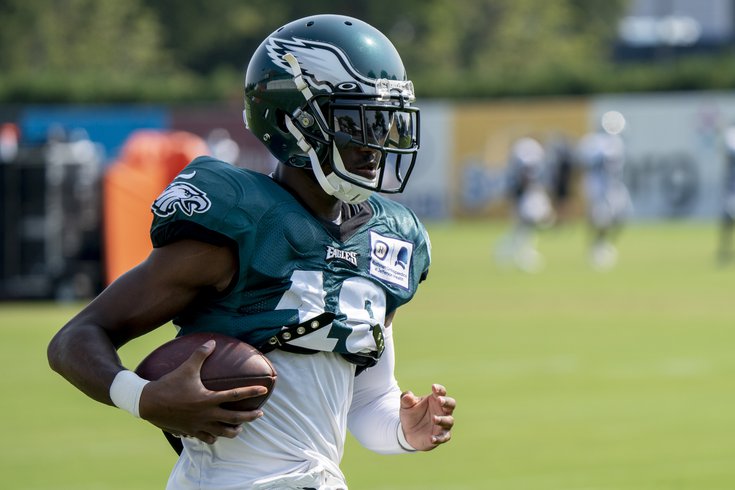 NFL practice squads are going to be huge during the 2020 regular season, as each team will be permitted to carry 16 players on it, plus, in the Eagles' case, roster-exempt DE Matt Leo.

On Saturday, the Eagles had eight players on their "team visit" list. All eight were guys who the team had in training camp, and who were waived a couple of days early on Thursday. Now that all eight players have cleared waivers, they are free to visit teams, but have to go through a multi-day process before they can be added back to a roster.

Those eight players are likely to be added to the Eagles' practice squad. They are:

• RB Elijah Holyfield: Holyfield was the likeliest of the three waived running backs here to make the roster. Instead, the Eagles went light, keeping only three backs on their 53-man roster. Holyfield would be the first call-up, should someone get hurt, and assuming they don't add a back from another team.

• RB Adrian Killins: Killins has excellent speed, but his skills need refinement and his body could use a little more muscle before he could play in a real game. His best chance at cracking the 53-man club at some point will be to become a reliable returner, but he is a player worth developing.

• RB Michael Warren: Warren didn't stand out in any way in camp, and it's perhaps a little curious why the team would keep three running backs on the practice squad. Perhaps because Killins maybe can't give real, between-the-tackles RB reps in practice, but Warren can? He feels like pure practice-only guy.

• WR Deontay Burnett: With the team activating Alshon Jeffery, thus keeping 7 receivers, there was no room left for Burnett, who had a standout camp. The Eagles are fortunate that he didn't get claimed.

• WR Travis Fulgham: Fulgham was a late add to the team during camp, but he showed a little something, making his share of catches. He's a bigger guy, at 6'2, 215.

• C Luke Juriga: Juriga received a guaranteed salary of $116,000 during the undrafted free agency phase of the draft, so he was all but assured at least a spot on the practice squad.

• S Grayland Arnold: Arnold isn't the fastest or biggest guy, but he has good instincts, and he was physical in practice. They'll continue to develop Arnold, who has a legitimate chance of cracking the roster at some point down the road.

• S Elijah Riley: Riley also showed something in camp at safety, making a number plays on the football. Like Arnold, he had a productive college career, and has a chance to grow into a back-of-the-roster player down the line.

I don't think the "cut 'em early" strategy is going to move the needle much in terms of how many games the Eagles win this season, but it's smart thinking nevertheless.