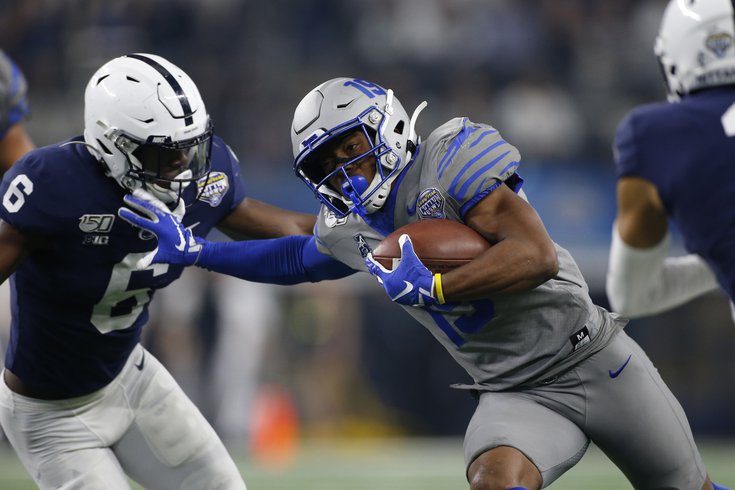 Kenny Gainwell is a good name for a running back.

During the college football season each year, as long as you were watching the games, we pointed out five players each week to watch who made logical sense for the Eagles in the following year's draft.

Some parts of the country are still trying to have a college football season, and some have already surrendered to reason. Still, this is an exercise that allows me to have a clue about these guys during draft season, and hopefully it does for you too, so we'll continue to profile players anyway, because why not.

There will be some college football action today, so here's a mix of guys playing in those games, and others who have opted out for the 2020 season.

Slater is a left-right versatile offensive tackle who started as a freshman and sophomore at RT, before moving to LT his junior season. He also played guard in high school, and has the tools to be able to slide inside in the pros, if that's where his NFL team chooses to play him.

I liked his game against Stanford last season. He's not an incredible athlete, but you can see that he's nimble enough to climb to the second level to cut off angles from linebackers. Against linemen, he gets to his spot quickly, re-routes them, and open up holes in the run game.

There's little question that the Eagles miss Halapoulivaati Vaitai already, given their late camp scramble to figure out who is going to play where along the offensive line in the wake of Andre Dillard's season-ending injury. But beyond a need for more depth, the Eagles' offensive line is among the oldest -- if the not the oldest -- group in the NFL. They're going to reload with younger players there eventually.

Slater could be an immediate depth piece with positional versatility, and become an eventual starter. He's a Day 2 type of guy, in my view.

In the 2020 NFL Draft, a couple of small-school safeties in Lenoir-Rhyne's Kyle Dugger and Southern Illinois' Jeremy Chinn went in the second round. Blankenship could be a small-school safety who follows in their footsteps.

In three years at Middle Tennessee State, Blankenship has 8 INTs, despite having his 2019 season cut short to injury. He's a really active safety, who can cover a lot of ground:

I would expect Blankenship to shine at the 2021 Senior Bowl, and test well at the 2021 NFL Combine.

It should be noted here first that Gainwell opted out of the 2020 season, after he lost four family members to COVID-19.

Gainwell would be a great fit in the Eagles' offense, though he might be a little overkill on a roster that already includes quality pass catchers like Miles Sanders and Boston Scott.

Over the last three seasons, Carter has displayed good ball skills, breaking up 30 passes and notching 6 INTs. To note, his pass breakup and INT numbers were down in 2019 because opposing offenses started deciding that he wasn't worth testing.

He's a sticky cover cover capable of playing inside or outside, which should appeal to Jim Schwartz.

We'll see how Avonte Maddox looks on the outside this season, but certainly the Eagles could be in the market for corner help in 2021 regardless.

Coxie is a bigger, physical receiver at 6'3, 200, whose game is reminiscent of J.J. Arcega Whiteside, or at least what JJAW showed in college.

Over the last two seasons at Memphis, Coxie has had very good production:

Of course, if Arcega-Whiteside shows substantial improvement in 2020, then a guy like Coxie wouldn't make a ton of sense. If J.J. falters again, then Coxie would be a fit at the X spot in the Eagles' offense.