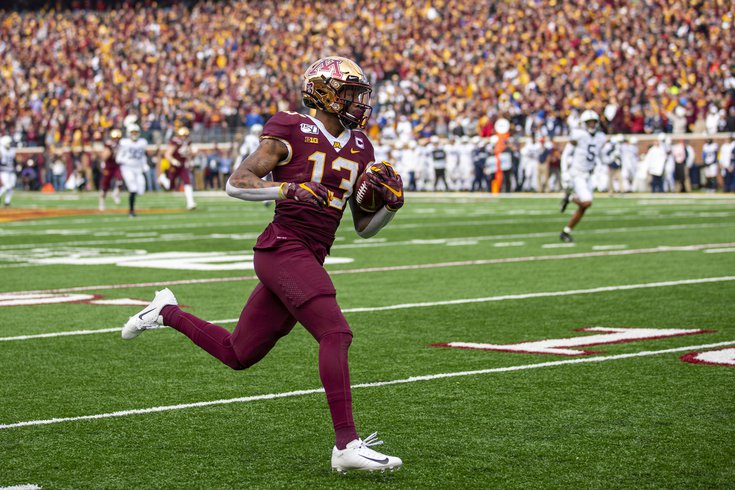 Layup prediction: Minnesota WR Rashod Bateman is going to be a guy commonly mocked to the Eagles.

During the college football season each year, as long as you're watching the games, we point out five players each week to watch who make logical sense for the Eagles in the following year's draft.

We'll see soon enough if the college football season can function semi-normally this year (I doubt it), but for now we'll cover some guys who have opted out of the 2020 season to prepare for the 2021 NFL Draft. We'll kick it off with five guys who are all potential first-round picks, because why not.

Minnesota had two receivers go over 1,200 yards receiving in 2019, in Tyler Johnson and Bateman. Johnson got selected in the fifth round of the 2020 draft by the Buccaneers, but Bateman is the more intriguing pro prospect, and as noted above, is a candidate to go Round 1.

In two seasons at Minnesota, Bateman has had good production:

The number that will stand out to some is Bateman's 20.3 yards per catch in 2019. While he has some deep ball ability, he is not a traditional field-stretching burner. As you'll see in the following highlight reel, a lot of Bateman's long touchdowns were the result of some coverage breakdowns, so that 20-plus yards per catch average is a little artificially inflated.

What he does do well is create separation, make difficult body control catches, and he'll be one of the better run-after-catch receiver prospects in the 2021 draft.

From the Eagles' perspective, they spent three draft picks on burners in the 2020 draft. Bateman is a guy will a little more size who can win in a variety of ways from the outside and the slot, and would complement the speed guys well.

From a pure "fun to watch" perspective, Moore is going to be a common draft crush for plenty of fans. At 5'9, 180, he's a small receiver, but he breaks an inordinate number of tackles, and his explosiveness is obvious. A highlight reel:

In some ways he's a little reminiscent of Penn State's KJ Hamler, in that he's a small speed slot guy with durability concerns, but in my view he is a superior prospect because he has better hands. He was also incredibly productive in two years at Purdue on "per game" basis. His overall numbers:

On a "per game" basis, Moore had 8.4 catches for 96.8 yards and 0.8 TDs. You don't often see that kind of production from a true freshman/sophomore in their first 17 games. To note, Moore's 2019 season was cut short due to a hamstring injury.

If indeed Moore is to be thought of as a first-round prospect, that will likely be a little too rich for the Eagles.

As we noted in our wide receiver training camp preview, heading into the 2020 NFL Draft, the Eagles did a lot of work on Jalen Reagor vs. Justin Jefferson, two players they had a high rating on. They felt that Jefferson was better in the slot than he was on the outside (a commonly held opinion around the league and outside of it). They also felt that in the west coast offense, it's uncommon to have a high-volume slot receiver. If Jefferson wasn't going to be a high-volume target, he wasn't going to be as valuable to the Eagles as he would to other teams around the league.

As such, Moore probably won't excite the Eagles as much as other teams, but he's too fun not to profile.

As a sophomore in 2019, Rousseau had 15.5 sacks. Only 2020 second overall pick Chase Young had more. Rousseau's appeal is obvious, in that he's a long-limbed athletic freak with inside-outside versatility who can get to the quarterback from anywhere along the defensive line.

The scary part about Rousseau is that he played wide receiver and safety in high school, and still has all kinds of upside as a pass rusher, even though he's already consistently dominant. Like, watch his high school highlights. He looks like when you create yourself in Madden and give yourself all 99's.

Edge rusher is potentially one of the Eagles' biggest upcoming draft needs.

As such, Rousseau will be a clear player of interest to the Eagles, but they'll probably have to be really, really bad in 2020 to be selecting high enough to take him.

The Eagles have spent hefty financial resources at defensive tackle, as they are paying Fletcher Cox, Javon Hargrave, and Malik Jackson massive sums of money to create disruption up the middle. However, ever since they used a first round pick on Cox in 2012, they haven't used many valuable draft resources on the position. In fact, they've only drafted three defensive tackles since then:

Cox turns 30 in December, and Jackson's time with the team is limited, so it wouldn't be a huge surprise if the team fortified a position that's already an obvious strength, and Twyman would fit like a glove in Jim Schwartz's penetrating defensive front.

Farley had 4 INTs and 12 pass breakups for Virginia Tech in 2019, and some believe that he could be the best cornerback prospect in the 2021 draft. In addition to his good production, Farley is an impressive athlete who came in at No. 11 on The Athletic's Bruce Feldman's freaks list:

The 6-2, 207-pounder led the ACC in passes defended with 16 and was tied for second in the league with four INTs en route to earning first-team All-ACC honors. Farley had back surgery after the season, so he didn’t have much chance to boost his testing numbers, but his Freaks card is stamped after clocking a blazing 24.16 mph on his GPS tracker against Notre Dame.

A look at his highlights:

Farley's combination of size and speed is perhaps comparable to C.J. Henderson, who went ninth overall to the Jaguars in the 2020 draft, however, unlike Henderson, Farley doesn't come with tackling concerns. He does, however, come with some injury concerns, as he tore an ACL in 2017, and he had the aforementioned back surgery.

The Eagles' interest in a big outside corner who can run should be obvious.