Is this the "Quarantined QB" that many had been asking about? 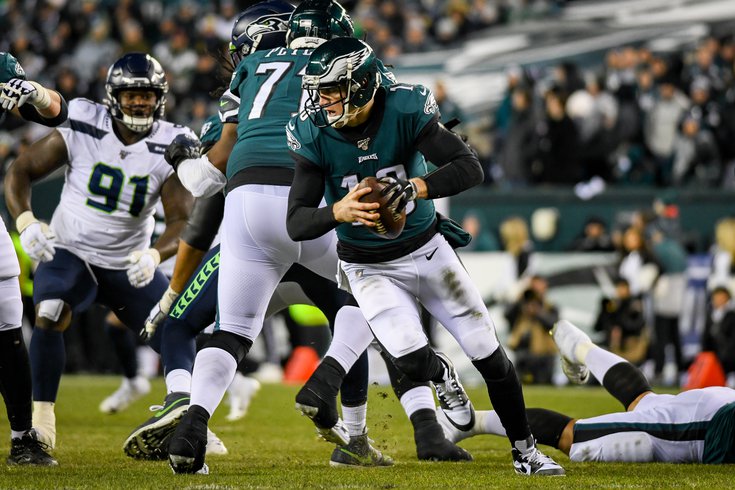 Quarterback Josh McCown rolls out during the Philadelphia Eagles wild card loss to the Seattle Seahawks.

The last time Eagles fans saw quarterback Josh McCown, he was in tears following the team's wild card loss to the Seahawks back in January, speaking to the media about how much it meant for him to get his first playoff action after starter Carson Wentz was knocked out with a concussion.

At the time, it sounded like McCown was walking away from the game for good, but as teams continue to fill out their practice squads, it appears McCown is back in Philly. Sort of. Maybe "with" Philly is the right phrasing there.

On Sunday, the Eagles signed Josh McCown to their practice squad, making the 41-year-old passer the oldest such player in NFL history, according to ESPN's Adam Schefter. In normal years, McCown wouldn't be eligible for the practice squad, but new COVID-related rules surrounding team's roster construction allows for players of any experience to be signed there.

But that's hardly the only thing that makes McCown's situation unique.

The 17-year NFL veteran won't actually be joining the team in Philly. According to Schefter, McCown will remain in Texas, where he'll work out while remaining quarantined, and will be the Eagles "emergency quarterback," which sounds like the "bubble QB" theory that Doug Pederson and other Eagles' decision makers were asked about during training camp.

"Those are things that I'm still considering having some ongoing conversations with Press Taylor, with Rich Scangarello obviously and with Marty [Mornhinweg] about how we're going to handle that room," Pederson said. "Right now, because our protocols that are in place are working, [and] the league protocols [are working]. We haven't divided that room up. We're still in that room. We are practicing the social distancing in the rooms. We're staying away from each other as much as we can there. Doing a lot of things virtually.

"But it's still an ongoing — I haven't made a decision one way or the other if I'm going to quarantine a quarterback during the week. Because it's such a fine line, right. If it is a backup quarterback you've got to think about all the — not getting the reps during the week and getting around your teammates. There's all kinds of things that factor into that process or that decision. Things are ongoing as it stands today."

It appears in the weeks since, Pederson made a decision. And while it's almost certainly not the one many outside the team were envisioning, it makes a lot of sense in light of Pederson's concerns outlined above.

Leaving McCown, who was 18-for-24 for 174 in that postseason loss to Seattle, safely inside his own bubble would give the Eagles a backup plan should their quarterback room suffer coronavirus outbreak — or should there be injuries to a couple of their rostered QBs.

After spending much of last season in Philly, McCown already knows the system and was actually being talked about as a possible addition to Doug Pederson's staff following his temporary retirement from football. If the Eagles want to keep McCown up to speed to any changes to the scheme and playbook, it's easy enough for him to join the Birds QB room virtually, as we've all learned over the last six months.

And that virtually learning won't just have to do with McCown learning the playbook, as it seems there's something to McCown having a future in coaching, and according to Tom Pelissero, that's part of the reason he's rejoining the Eagles.

Josh McCown wants to be a coach, and he'll essentially be a player-coach -- virtually -- for the #Eagles in 2020 while making $12,000 a week on the practice squad. A smart insurance policy for Philly, and on-the-job training for McCown while living at home in Texas.

There's a good chance you never see McCown in Philly this year. But if nothing else, this is a low-cost, effective way to plan and protect against the worst-case scenario unfolding this season.