Eytan Shander: Eagles need Miles Sanders and Jalen Reagor to live up to the hype 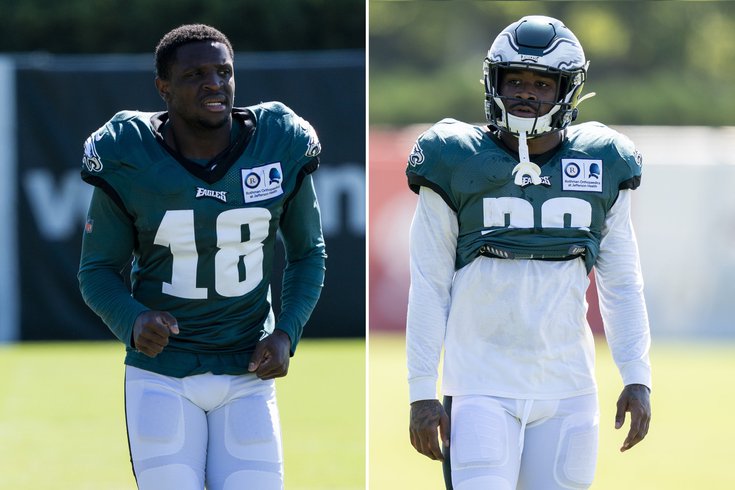 There is really no other way to put this — and please know that I get just how absurd it might sound if you say it out loud — but there is a ridiculous amount of pressure on two young Eagles players this season. Yes, ridiculous, and it comes with the threat of a rather large domino effect if one or both can’t live up to the hype. You may think it rather strange to put so much pressure on a rookie wide receiver or a second-year running back, but this is the situation the Eagles have set up, for better or worse.

Miles Sanders enters the week with a capital Q for questionable. Clearly, this was more than just holding out Sanders from any extra wear & tear. This was more about looking at an injury and doing everything to preserve him for the season. When his season actually begins is a question mark now for all of us, but it's looking like he'll at least see some action on Sunday.

Once he's healthy, however, this offense will rely on him way more this year than any running back since LeSean McCoy and Brian Westbrook. Even now, with two big tight end targets and some questions on the outside, he may see a healthy combination of runs and catches.

This is where we see so much of last year’s coaching/execution issues expected to be fixed with a band-aid. That adhesive is Sanders. We have been told he’s the workhorse back. A true three-down back who’s ready to assume a ton of rushes each week. But we also know throwing short and out of the backfield can really help Carson Wentz if anything on the outside or middle gets shut down, or if the offensive line should struggle. We know Doug loves him some screens, so even that adds touches for Sanders. I can’t wait to watch him play – healthy of course – this year in the offense. But I know the dangers of expecting him to be the offensive player of the year, then blaming him for another stalled season on offense.

This brings us to the rookie. I’m so pumped to watch Jalen Reagor play football this year, but it might come at the expense of others. I’m OK with that too.

This kid has the potential to be the team’s leading WR after his first year. That really isn’t that hot of a take when you factor in everything else. Right now, the guy you can rely on the most at that position is… Greg Ward. DeSean Jackson might not play more than four games this year, as we so often see injuries getting the best of him. Alshon Jeffery is another guy we simply can’t predict how good or how healthy he will be. It’s too much of a risk to even pencil these guys in for huge years.

The two consistent weapons that return are the tight ends, and that should be enough to open up a lot on the outside. That’s where Reagor steps in with the opportunity to show his skillset, combined with maybe being one of the only bodies left standing. It’s a young man’s game, and this kid will have every opportunity when healthy to take over as the top receiving target.

I love the idea of both of these young men stepping into top roles for years to come. I also recognize how dangerous it is to stack all of our chips on two players to fill in the cracks left by Ertz and Goedert. The good news is that we aren’t alone. The Eagles team put this pressure on Sanders and Reagor, coming into a season where they continue to tell us they are competing.

It looks like one of the truest forms of “Boom or Bust” this year, mainly based off our expectations. The good news is that we are off the hook. The team put these expectations on young talent and let’s all hope it’s enough to get this offense going. I can’t sit and watch them stumble out of every single gate again.

Each week I’ll provide one big bet I like for the upcoming Eagles game. It can be a simple line bet or a more specific prop, and you can find everything you need at TheLines.com. This week, I love the under-43 total for their matchup against Washington. We are going to see a lot of offenses struggle based on no preseason games and a weird offseason. That alone would have me leaning towards this total going under. Then, add in the two specific teams in Philadelphia and Washington, and it should be a little clearer.

Both teams have their struggles on offense to overcome and I’m not sure Week 1 following a pandemic is the right fix. The Eagles have been dreadful at times starting off games, and that may not be easy to turn around with zero games and major changes to the offensive line. Washington has a big-play wideout, but questions remain on how he’s getting the football. This is a day for the defensive line. Pound that under.

I have been so fortunate to be a part of the FOX29 Good Day “extended” family, even during the pandemic doing hits at home in the morning. Having a face for radio, I’m just grateful for people who have recognized there’s something there to work with! I’m overwhelmed with gratitude to announce that I will be joining the Props & Locks show this season on FOX29 with Scott Grayson and Sean Bell. For the first month, the show will air on Fridays at 10:30 p.m. Then, when the station begins to carry TNF, we will be live on Thursdays at 7 p.m. I am so thrilled to be a part of this crew locally and with the great people at FOX Bet who created the show.

We cover more than just the Eagles in this 30-minute weekly show. As you will see this week, we touch on the NFC East and a couple of other smaller plays throughout the NFL schedule. There is also another HUGE announcement coming that will be part of what I am doing here on PhillyVoice, so stay tuned.

Thank you to all for just taking the time to read and support what I am doing. You may not realize how much of an impact you make simply by allocating some time for my content.