'I want to be here for the long run,' he told reporters. 'I don’t know, for sure, if that feeling is mutual.' 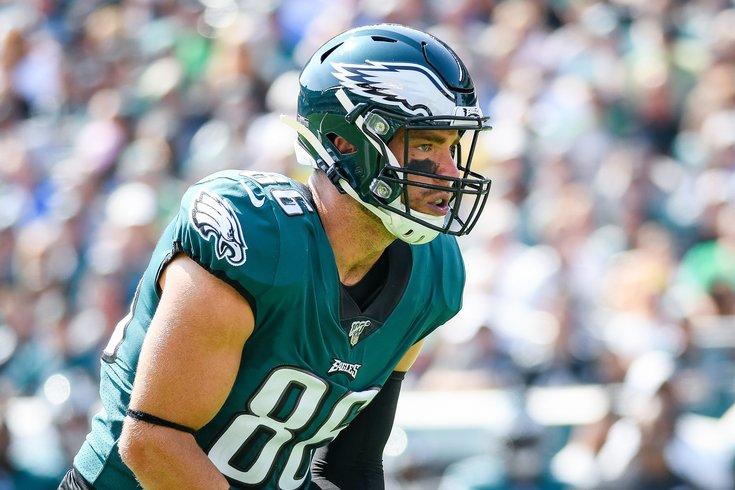 The Eagles and Zach Ertz might be headed for a divorce. At least that's how Philly's star tight end made it sounds on Thursday, just days before the Eagles visit Washington for their 2020 season opener.

Speaking to reporters for the first time since reports surfaced that the team and player had reached a stalemate in their current contract negotiations. Perhaps that's a polite way of putting it, as Ian Rapoport framed it as "an abrupt halt" following the Eagles' latest proposal:

Sources: Negotiations between the #Eagles and TE Zach Ertz came to an abrupt halt when PHI made an offer that had less guaranteed money than their offer in November. The backloaded offer also had less cash over the next 4 seasons annually than Austin Hooper’s #Browns contract.

Of course, that comes after reports back in March that revealed Ertz actually turned down an in-season extension offer for $12 million per year, which was $1 million per year richer than the Hooper deal alluded to above.

"I think you guys know me over the years. I'm kind of an emotional guy when it comes to football," Ertz told reporters on Thursday. "I kind of play with my heart as much as I can. Obviously it's been frustrating at times, it's been difficult. I said all along I want to be here for the long run. I don't know for sure and if that feeling is mutual, but I know I'm going play this year like it is my last year, and I'm gonna leave everything I possibly have in the tank for this team and the city.

"It's what this city deserves, nothing less. So I'm going into this year that I'm gonna leave it all out there, whatever happens happens. I'll let the details be with my agent and Howie [Roseman]. But I'm going to do everything I can to give the city what it deserves, and that's everything I possibly have even if it means playing with that lacerated kidney. Whatever it takes to win football games and do whatever I can to kind of leave a mark on this team and the city."

Currently, Ertz, who said he wants to emulate Kobe Bryant and play his entire career for the same team, has two years left on his contract. He is set to become a free agent after the 2021 season and will carry a roughly $12.5 million cap hit each of those seasons. But it's hard to argue he isn't worth that cap hit.

Over the last four seasons, Ertz has led the team in receptions and receiving yards and is looking for a deal that will pay him closer to what the league's top two tight ends, Travis Kelce and George Kittle, are making. Both signed lucrative extensions this offseason that have annual values in the $14-15 million range. Here's what our own Jimmy Kempski wrote about those two deals and how they relate to Ertz specifically just a few weeks back:

There's no doubt that Ertz's representation will attempt to use Kittle's contract as a benchmark for negotiations, which from the Eagles' perspective, should fall on deaf ears.

The much better subject for comparison is Kelce, who is 30 years old. Kelce and Ertz were both selected in the 2013 NFL Draft. Kelce had knee surgery his rookie season, and he did not post any stats that year. He has only missed one game since. Despite that missed rookie season, Kelce has 722 more receiving yards and 2 more TDs than Ertz. Kelce has also been selected to the NFL All-Pro team in each of the last four years (first team twice, second team twice), while Ertz has not yet been named an All Pro in his seven year career.

Obviously, it's hard to compare Ertz with a much younger Kittle, but to hear Jimmy tell it, Ertz side should actually be looking to beat Kittle's deal, which is extremely team-friendly.

As for Ertz, he doesn't think it should be all that hard for the team to find the money.

"Everyone's got their side of the story... I don't get into the exact details but I don't think it should be that hard to get a deal done right now but at the same time another season is starting," Ertz told reporters. "I can't really focus on that. During training camp it kinda got the best of me a day or two and I really just had to talk to a couple people and kind of reset my mind, leaned into my faith that I can't really control this situation and I'm gonna trust in the Lord understanding whether it's gonna be Philly, hopefully — I want to be here — or wherever it is. But at the same time, I can't control that. I'm gonna do whatever I can to help the team, and I cannot be more excited going into this year, I've never felt better going into a football season."

But if the can't get a deal done, Ertz could wind up playing in a new uniform for the first time in his NFL career, something he is hoping to avoid. Why? Because Philadelphia is home.

"I want to be here. I've never thought of playing in another city," Ertz said. "My family loves it here. My mom lives here. My brother is going to Temple. His fiance is going to school out here. So we have roots here now, this is home to me. I will never think about playing in another jersey until, if that time were to come. You know I've always said from the moment I got here, I wanted to be like Kobe [Bryant]. You know, Kobe was a guy I always looked up to, and he played with one organization his entire career and that's kind of what my goal was to always do was play here.

"I'll never let the thought of playing in another jersey creep in because I don't think I can picture that thought in my brain yet. I don't even want to get there yet because I don't want to shut the door. And then I think when you start having those thoughts, you're not going to give 100%, and that's something that I will never do. I'll always give 100% for this team and the city, because of how much I love it here."

Will the Eagles buck up and make their star tight end happy? Or will they decide to stick with Dallas Goedert and look elsewhere for a second tight end — and how will that leave one of Ertz's biggest supporters, quarterback Carson Wentz, feeling?

Only time will tell, but in the meantime, this isn't a great look for an organization that's well known around the league for taking care of its own.