Week 1 NFL picks: Rounding up the experts' predictions for Eagles vs. Washington 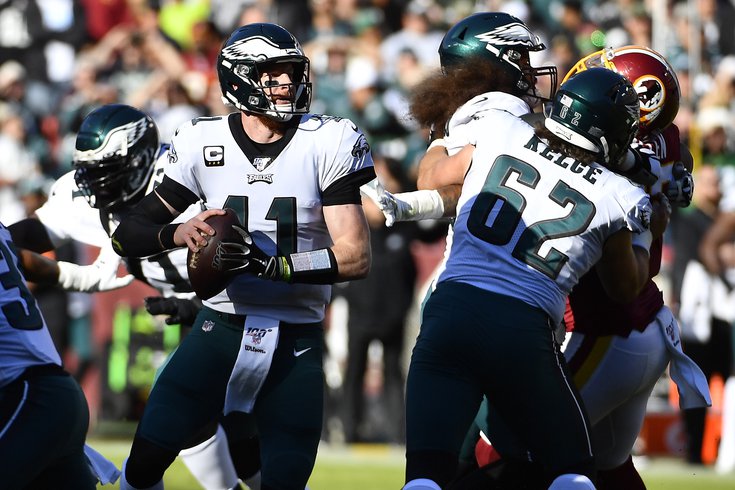 Imagining the possibility of having the month of September arrive with no NFL games to pick was a thought too daunting and scary for us in the sports writing business.

Thankfully, the season's opener went off without a hitch in Kansas City Thursday night, and there are a full slate of games set to follow as Week 1 is finally, actually here amid the strangest off-the-field conditions in recent memory.

The Eagles will take on Washington's Football Team, which among other controversies this offseason also lost its name and has yet to pick a new one. The Birds are 5.5-point favorites, according to TheLines.com's consensus odds, and even as favorites there has never been a more challenging time to pick NFL winners or scores.

With no preseason games and very limited practices, there's really no telling what the games will look like (though Thursday night's game did have fewer penalties, and more solid defense than expected). Still, that isn't keeping experts from across the football media landscape from trying to pick winners, and final scores, for Week 1.

Here's a look at who the experts think will win at FedEx Field Sunday afternoon at 1 p.m.:

• PhillyVoice staff: Kicking things off, the entire staff seems confident the Eagles will prevail in Week 1. Here's a snippet from Kyle Neubeck:

Hard to believe football is back, personally. With summer basketball to keep me occupied, I wasn’t as desperate to hang on every piece of training camp news as I am when we’re emerging from the other side of baseball-only summers.

I have a couple of guiding beliefs, though, and the main one is that offense will be king early in the season in a more pronounced way than usual. The lack of crowd noise will make communication and LOS adjustments easier than they have ever been, and the game has already tilted so far toward offense that I think it’s going to be tough sledding for defenses early on.

So this pick comes down to which offense I believe in more, and that’s the Eagles by a good margin, in spite of the question marks I have about the young wideout group and the offensive line. If they can keep Wentz upright, which will be the theme of this season, I trust they’ll put points on the board. On the flipside, I think Washington’s OL is exploitable and Haskins is someone they should be able to rattle.

Plus, do they really want to be the first team to lose to the Washington Football Team? Come on.

• ESPN staff: nine of their ten experts are picking the Eagles to take care of business on Sunday, with Dan Graziano the lone Washington taker.

After a tumultuous first offseason as Washington's coach, Ron Rivera can look at his defensive line and smile. This group -- led by rookie Chase Young -- could be as talented as any that Rivera coached in Carolina. Washington is well-equipped to test the Eagles' reconfigured offensive line, which includes Jason Peters now back at left tackle. That could keep this game ugly close for a while, but Rivera is unfortunately a defensive coach in an offensive league. Second-year quarterback Dwayne Haskins is surrounded by the shakiest collection of talent in football, especially the left side of his offensive line.

The Eagles have won the last six games against Washington and the "Football Team" is coming off of a nightmare of an offseason. They were forced to change their name, their uniforms and were blasted in the media for the environment team owner Dan Snyder allegedly fostered behind the scenes. On the other hand, Philly is on the upswing in almost every way. I truly do believe that Washington is headed in the right direction with Ron Rivera at the helm, but this team still has tough days ahead of them before they get back to competing in the NFC East. I believe that Miles Sanders, who led all rookies in 2019 with 1,327 scrimmage yards, is going to have a monster second season and I believe Carson Wentz could have one of his better campaigns as well. It's incredible that this squad made it to the postseason despite all of the injuries at wide receiver, but I think first-round pick Jalen Reagor could come in and make an immediate impact. Terry McLaurin is not going to catch this team by surprise again -- especially with Darius Slay now in the secondary, so go ahead and take the Eagles to win by more than a touchdown.

I expect the Football Team to take a step in the right direction under Ron Rivera this season, but we may not see the results until late in Rivera’s first year. The Eagles should cruise on Sunday.

The Eagles struggled with Washington last year in Week One until Carson Wentz got acquainted with DeSean Jackson. They can finally get reacquainted on Sunday.

• Sheil Kapadia, The Athletic: Sheil Kapadia, the former Eagles beat writer turned national NFL writer, makes picks against the spread for every game over at The Athletic. This week, he's taking the Eagles to not only win, but to cover the 5.5 points on Sunday:

Without fans in the stands, the Eagles won’t have their usual home-field advantage at FedEx Field. Chase Young makes his NFL debut against 38-year-old left tackle Jason Peters. Washington’s best chance for an upset is for its defensive line to dominate the Eagles’ offensive line. Look for the Eagles’ offense to incorporate a heavy dose of under-center play-action and get Carson Wentz on the move. But Wentz has to protect the ball better. His 34 fumbles over the last three seasons are tied with Jameis Winston for tops in the league.

• Bleeding Green Nation staff: It was a clean sweep over at BGN, with all nine writers predicting an Eagles' win.

• Philadelphia Inquirer: All four of their Eagles writers are taking the Eagles on Sunday, but we thought Les Bowen's write up was best. He is predicting a 24-13 win for the Eagles:

I expect total anarchy, at FedEx Field and across the league, for Week 1 — every team missing seven starters by halftime. Injury carts that need batteries recharged and tires rotated by the end of the third quarter. Not just because there was no spring work, and there were no preseason games. More because that is what 2020 is about, dashed dreams, canceled plans and chaos.

Other than that, I expect the Eagles will find a way to win, because that is what they do against Washington, having won the last six meetings, including season openers in 2017 and last year. The Eagles also win openers, having taken eight of the last nine, and all four under Doug Pederson.

I don’t think the Eagles' offense or offensive line is in sync yet, and that’s a concern, but I don’t see how Washington can be all that sharp, either, having battled the same conditions, in addition to having all-new coaches and systems, along with a lot of distracting controversy over the former team nickname and alleged front-office sexual misconduct. I like the Eagles’ defensive line as the unit that decides the game.

Lots of mistakes, some crippling injuries that might make the outcome an afterthought, but a sloppy victory. Hope I cheered everyone up!

• NJ.com staff: Six of their seven writers are picking the Eagles, with the lone exception being Giants beat writer Matt Lombardo. Here's what he had to say:

The Eagles are banged up. These two teams always seem to play each other tough, especially early in the season. Chase Young could be an issue for the Eagles' offensive line. Dwayne Haskins remains a bit of an unknown, but Antonio Gibson is the kind of multi-faceted running back who could give the Eagles' linebackers some fits.

The Week 1 NFL schedule was finalized so long ago that one of these teams went by a different name when it was announced. Washington has been fortunate to have new coach Ron Rivera guide the team through a turbulent offseason, but he won't be able to steer his players to many wins in 2020. The slate begins with the NFC East rival that won the division last year and has a solid chance to repeat.

This was an easy standout. Philadelphia isn't getting enough love after further upgrading its defense with Javon Hargrave and Darius Slay and looking to be more explosive shape offensively around Carson Wentz. Meanwhile, Ron Rivera is trying to clean up a mess as the new coach of the Washington Football Team. The Ohio State first-round combination of Dwayne Haskins and Chase Young should show promise as the season progresses, but for now, this is a rebuilding team getting used to new offensive and defensive schemes. The short division road trip hasn't been a problem for the Eagles in the past and they are Super Bowl contenders in contrast to Washington being in play for the league's worst record.

MORE: Shander: Eagles need Sanders, Reagor to live up to the hype