Mailbag: What positives can we look forward to with the Eagles in 2020? 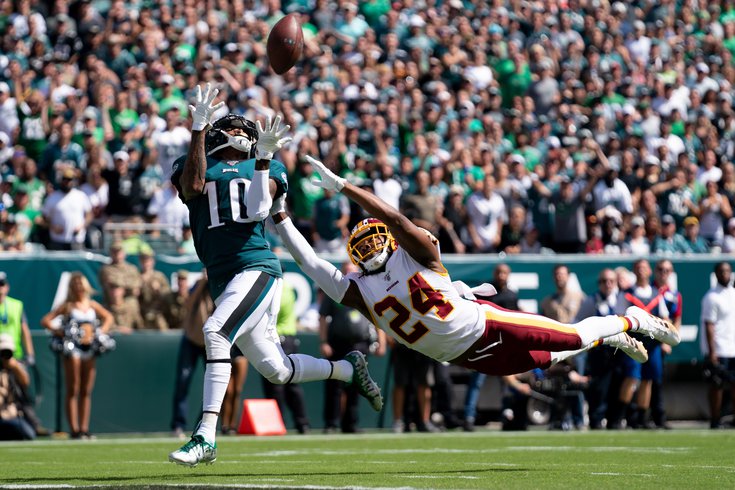 The Eagles will actually have some speed on offense this year, which will at least make them more fun to watch.

Question from Pragmatic: This whole OL situation is really concerning, what are the positives I can look forward to?

I think the receivers, secondary, and defensive line all have a chance to be significantly better this year. I mean, there's actually going to be some speed on offense! And at corner! Haven't seen either of those things in while on this team. And then there's Miles Sanders, who is a true candidate to become a top running back this season.

Simply on the entertainment scale, I do believe that they'll be a lot more fun to watch than the slow, plodding, chain-to-chain approach they were sort of forced to employ in 2019.

Question from Norm Snead: Why does Cordy Glenn remain unsigned close to the season? Injured? Personality issues? Locker room menace? Asking for too much $$?

Glenn is a vested veteran, so if he’s on the Week 1 roster, his salary is guaranteed for the entire season. If they sign him after Week 1, it’s not. I think that’s all this is. They’ll probably sign him on Tuesday.

Question from Novo: Assuming Lane Johnson is fine, why is everyone so down on the offense. I understand losing Brandon Brooks is huge, but aside from that, it’s all upside for the offense no?

I can’t speak for anyone else, but my biggest concern is the offensive line’s depth. As we’ve noted several times here, they have no experienced players ready to fill in when someone goes down. Cordy Glenn will help, if they sign him next week, but even then, it’s the thinnest OL group the Eagles have had in some time. They’re fine for now, in theory, but some difficult OL juggling is coming at some point.

I mean, when two starting offensive linemen go down for the season before the season even gets underway, that’s a big deal.

Question from Septhinox: What percentage of total snaps will JP miss?

Question from Enter a Valid Display Name: Has Hargrave been practicing?

Nope. Hasn’t even been out there this week, so far. The final Week 1 injury report will be out later this afternoon. We’ll have that when it comes out, but I wouldn’t expect to see Hargrave Week 1. It’s worth noting that they could have IR’d him for three weeks, and didn’t, so maybe he’ll return soon?

Question from blokejoke: Jimbo, what makes someone like Jason Kelce - who's been unbelievably consistent and played at such a high level - someone who's not considered a future HOF type of player? You have always made it seem as well that he's kind of on the outside looking in and only if he gets a couple more All-Pro nods and wins another SB would he then maybe be considered. Is that because he’s a nontraditional type of center? Or is that just because no one appreciates O-linemen very much in the first place?

I think the fact that he’s a “one of a kind” center helps him, actually. His best argument is going to be that he could do things in this era of football that no other center could do, athletically-speaking.

But, there have only been seven post-merger centers to make it in. They are:

Of course, Kelce has the 1 chip, 3 All-Pro nods, and 3 Pro Bowls. So that’s sort of my thinking that he probably has some work to do to convince voters. If he gets another All-Pro / Pro Bowl double banger this year, that’ll help. Another chip (and subsequent drunken speech) would definitely do it, I would think.

It doesn’t help that Alex Mack and Maurkice Pouncey made the 2010’s All-Decade team over Kelce. Alex Mack couldn’t hold Kelce’s jock, but somehow he got voted in ahead of Kelce.

Question from Gabe: If Dak Prescott has a good season for the Cowboys, is there any chance he might become the highest paid player all time? Looking forward to hear Jerry Jones explaining why they let him sign with the Jaguars, and why Andy Dalton is their best chance to win a Super Bowl.

Deshaun Watson got a great deal from the Texans, in that he’s up around $40 million, and it was only for four years, meaning that he can cash in again in three or four years on a new deal after the market has risen even further. Prescott and the Cowboys disagreed on the number of years (the Cowboys wanted at least five), so that deal didn’t get done. In the long run, stubbornly sticking to their guns on that is really going to cost Dallas.

Great day for Dak Prescott because of Deshaun Watson's contract extension. Unless Prescott has a serious regression this season, he should get to the $40M per year mark if he signs a long term deal with the Cowboys in 2021.

Joel has a podcast called “Inside the Cap” where he goes into more depth of how the Watson deal affects Dak and the Cowboys. The title of the episode is “Deshaun’s deal > Mahomes’ Deal.” If you’re into Cowboys schadenfreude, I’d check that out.

Question from b: Will John Hightower see any WR snaps week 1?

Yes. He’ll probably be the No. 4 receiver. When they’re in 11 personnel, it’ll probably look like this:

Even if nobody gets dinged up, I think Hightower will spell DeSean at the Z spot on occasion, and he’ll play in four-receiver sets, though the Eagles don’t use those much.

Question from nceagles: How awful/sloppy do you expect week 1 games to be, given the lack of preseason?

A whole lot of teams didn’t play starters in the preseason last year, so I don’t think it’ll really look a lot different. The Chiefs-Texans game Thursday night seemed fine, in terms of rust or sloppiness or whatever. Of course, the Chiefs are awesome, so that probably had something to do with it.

Question from greenwithenvy: The Eagles record at the bye will be (_____)? (They'll have played Wash, Rams, Bengals, 49ers, Steelers, Ravens, Giants, and Cowboys, to jog your memory.)

I’ll say 5-3. They really should win the first three games. They better at least go 2-1 in those games, or it could be a long season.