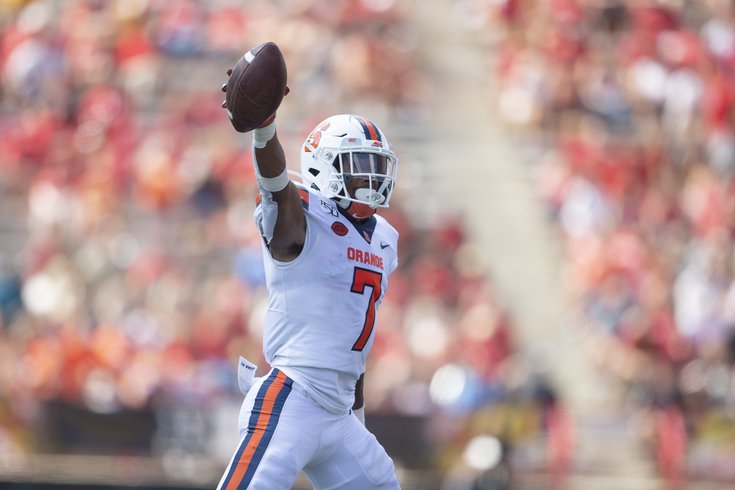 "You know I was thinking we could go back home... have some dinner and pop in the Cisco CD... no? Weren't thinking that? OK."

Cisco has been a pick machine in his first two seasons at Syracuse, grabbing seven INTs as a freshman in 2018, and five as a sophomore in 2019. He has good size, and has the athleticism and speed to run sideline to sideline in a single-high role. As you'll see in the following highlight reel, he can also deliver a big hit on occasion, however, not shown are the missed tackles that have led to big plays.

Rodney McLeod is under contract in 2020 and 2021, and Cisco would make sense as a rangy replacement on the back end. Day 2.

Owusu-Koramoah is an undersized linebacker with impressive athleticism, who made Bruce Feldman's 2020 freaks list:

He’s coming off a breakthrough season where he led the team with 80 tackles and 13.5 TFLs to go with 5.5 sacks. He arrived in South Bend weighing 198 but is now a rock-solid 220 at 6-1½. His explosiveness is reflected by his 39-inch vertical, a 10-3 broad jump and an equally impressive 20.4 mph on his GPS.  Owusu-Koramoah also notched 42 pull-ups in off-season training and back squatted 555 pounds.

The Eagles love them some undersized linebackers with athleticism and Kyle Crabbs of TheDraftNetwork even described Owusu-Koramoah as "like Davion Taylor but with instincts." You don't get to see his cover skills here (which will appeal more to the Eagles), but as you can see, he has some pass rushing chops:

The Eagles just spent a pair of picks on undersized, speedy linebackers in the 2020 draft, so I don't know that they'll be in the market for another one in 2021, but Owusu-Koramoah is definitely their "type." Day 2.

If Samuel Jr. has the same confidence that his old man had, then I'm certain he's going to be a Jim Schwartz favorite. However, their games have some similarities, and some differences. Like dad, Samuel Jr. is a great off-man cover corner who doesn't give up much separation. He's a better tackler than dad, but does not have dad's ball skills (obviously a high bar there). Junior does have 23 PBUs in two years at FSU, but only one pick. Maybe he can make a leap in that area this season. A look:

Samuel Jr. doesn't have great size, at 5'10, 184, but he has mainly played on the outside at FSU, and the Eagles don't seem to care much about size at corner. Probably a Day 2 guy.

In 2019, "Boogie" had 57 tackles (18 for loss), 10 sacks, and three forced fumbles for Wake. He's a big, powerful rusher at 6'5, 285, who plays on both sides, can also shift inside on obvious passing downs, and is excellent against the run. He likely won't wow anyone at the Combine, but he has a good repertoire of pass rush move, and he's a high-energy player.

Edge rusher feels like a pretty clear need for the Eagles in the next draft, and Basham is a versatile lineman who could probably contribute early. He has a chance to sneak into the first round with a big season.

One of the guys trying to block Basham today will be Carman, a former five-star high school recruit, and a mountain of a mean human being at 6'5, 345. Here he is against Syracuse last year (I tried to find his game against Chase Young last year, but no luck).

The Eagles will have to decide if they want to trust Andre Dillard to be their starting LT in 2021. I wouldn't. They probably will. If so, they're unlikely to use a high pick on another offensive tackle. Carman should go in the first two rounds.