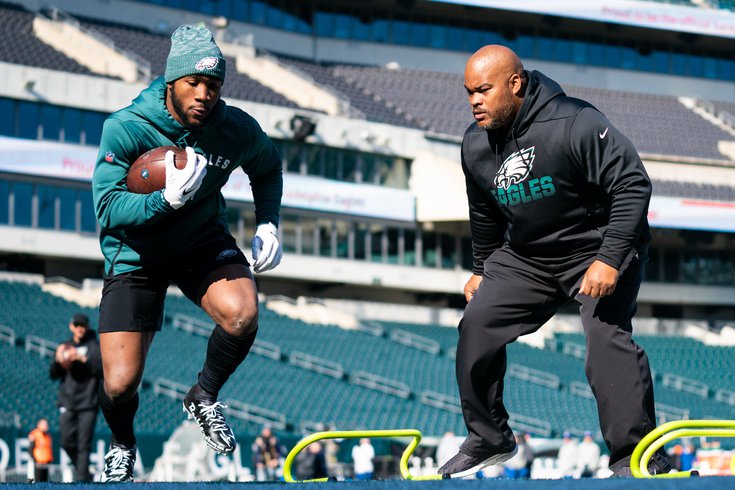 Miles Sanders is looking to make a big jump as a receiver in Year 2.

The media-attended portion of Philadelphia Eagles training camp is finally underway, and Day 1 is in the books. It was only a 10-10-10 practice to kick it off, but we have plenty of notes. Let's just get right to it.

[You can read more on the Eagles injuries, here.]

The Eagles are likely to be cautious during this time of year even with less serious injuries, but Barnett's continued struggles with injuries, and Hargrave's "multiple weeks" prognosis are both alarming, to say the least. Peters and Arcega-Whiteside did not practice today, but they were present, as was Alshon Jeffery, who is on the PUP list. Barnett and Hargrave were missing completely.

• Day 1 of OTAs is usually all about the depth chart. We usually have a pretty good idea of who will line up with the 1's, the 2's, and the 3's, but we see hard evidence on Day 1 of the spring. Because there were no OTAs this year, depth chart observations had to wait until the third week of August.

Let's start with the offensive line.

• There were no surprises on the first-team defense, other than Barnett and Hargrave being MIA.

• The top three receivers were DeSean Jackson, Jalen Reagor, and Greg Ward. In the past, I've seen coaches opt not to put a rookie with the first team right off the bat. In theory, Arcega-Whiteside might have been that guy (as noted above, he was out today), but the Eagles aren't bothering pretending like anyone playing behind Reagor is as talented as him.

• Do you care about the first-team punt unit? Well, too bad if not. It looked something like this (minus the gunners):

The wings were Boston Scott and Corey Clement, the personal protector was Will Parks, and the guys along the line from left to right were Davion Taylor, T.J. Edwards, Rick Lovato (long snapper, duh), Dallas Goedert, and Alex Singleton.

The first-team punt unit in training camp practices can sometimes indicate not only who might be making the team, but who could be active on game day as well.

Gerry and Goedert also practiced long snapping prior to practice today, just FYI, in case Lovato were to get hurt, in-game. Gerry was OK. Goedert stunk.

• Guys who got punt return reps: Jalen Reagor, Greg Ward, DeSean Jackson, and Miles Sanders. Again, I wouldn't count on seeing Sanders or Jackson getting involved much in the punt return game.

• Side note: Killins practiced with the wide receivers today, not the running backs.

• Miles Sanders and Boston Scott lined up all over the formation today, and Sanders caught a pass on a slant route in the red zone. It appears as though the Eagles intend on expanding Sanders' role in the passing game, lining him up more as a receiver, a la Brian Westbrook.

"Definitely want to increase what he can do for us, and if that means using him out of the backfield a little bit more in empty situations, we want to do that and see where he can grow and get better and help us," Doug Pederson acknowledged on Monday. "I do think that skill-set is conducive, not only to him, but obviously matchups and things of that nature from a defensive standpoint.

"Boston is the same way. Boston as you saw toward the end of the season, he became kind of our jet sweep guy. He became a guy that we used, he and Miles both actually, out of the backfield together. It's a good combination of guys together there with those two and really look forward to these next few weeks just getting these guys ready for Washington."

As many of you saw in the Westbrook days, the Eagles were able to put stress on opposing defenses by lining up Westbrook all over the formation, where they could either force opposing defenses to play zone, or try to cover him with a linebacker or safety.

"When it comes to Miles, I've been thoroughly impressed with what I've seen, this big jump from Year 1 to Year 2, mentally processing everything and how he sees the game is completely different," Carson Wentz said after practice.

"It puts a lot of strain and stress on the defense, to know that Miles might take a handoff and run it up the middle. We might flex him out. He might run a go. He might run a slant. The ability that he brings out of the backfield, and splitting out at wide receiver in the slot and out wide, just is a coverage nightmare for defenses. In my opinion, we'll expect to see more zone coverage because people know what he can do as a receiver. So we'll see how teams want to play us, but we're always looking to take advantage of those mismatches, for sure."

• Goedert had the play of the day. This occurred waaaay down on the other side of the field, so you may not have seen reporters tweeting about it, but this is kind of a nice catch:

• John Hightower also had a nice play today. Rasul Douglas tried to jam Hightower at the line, but whiffed, and Hightower was off to the races, getting vertical and easily hauling in a deep ball. Hightower's speed is obvious, but he'll have to prove that he can beat press coverage in the NFL, so that was a good sign, even if a lot of folks have beaten Douglas deep.

• Corey Clement looks like he's healthy. He ran well today, and made a nice catch on an off-target throw in the flat.

• Reagor had at least three catches today, all on slant routes (or at least the ones that I saw).

• As expected, the Eagles are prioritizing getting the first-team offense ready for the season over back-of-the-roster player evaluation, as Wentz got an abnormally high share of the snaps.