John McMullen: Believe all the Eagles hype you want — but we've been here before 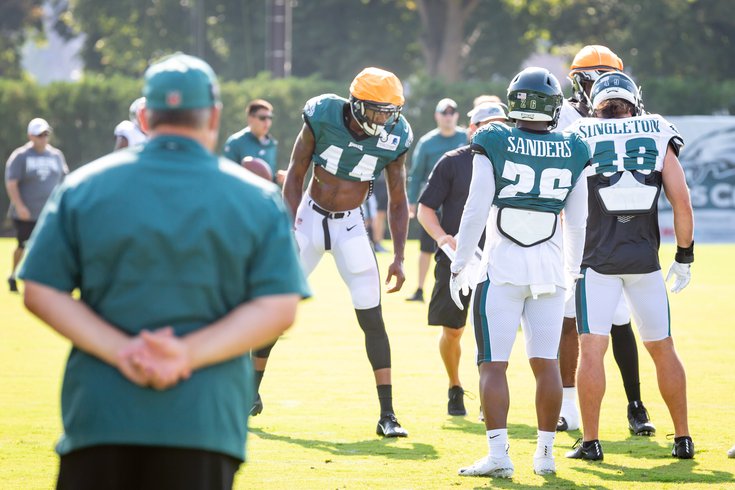 In a normal NFL year, far too many will get excited over a training camp tweet or a trumped-up moment in time during an August practice.

Now turn that sentiment up to a Spinal Tap trademarked "11" in 2020 as a football-starved public gets a little taste of what they've been missing and are essentially still banned from seeing for themselves due to the COVID-19 pandemic.

Training camp — real training camp — is here in Philadelphia. No more acclimation periods or glorified OTA practices, the pads can come on Monday and, COVID-permitting, teaching will quickly turn toward evaluation just as reporters show up.

For Doug Pederson, the timing is condensed but he’s sticking to his usual M.O. of two live situational practices rather than full-fledged scrimmages in the absence of preseason games.

“I've had a chance to kind of go through the whole schedule,” Pederson explained. “... As you guys know, I typically have two days where it's more of a live, controlled-live sort of practice, tackle to the ground. I'm going to stick to that schedule. I'm going to stick to two days of having situational, scrimmage-type practices. I feel like it's a great way to get our guys prepared to game situations, game action.”

Former star NFL receiver Chad Johnson kickstarted hype season early and sent the local faithful into a tizzy — both good and bad, depending on the personality disorder — after pulling over his car to the side of the road to check out some of the handiwork from his friend, now 33-year-old Eagles receiver DeSean Jackson.

Man @DeSeanJackson10 just sent me some 1 on 1 clips from camp, i am pulled over on the side of the highway with excitement watching 🏈

The most notable clip showed Jackson, returning after a lost season due to a core-muscle injury and a failed attempt to fight through it without surgery, blowing by the Eagles marquee pickup in the offseason, three-time Pro Bowl cornerback Darius Slay.

Hesitation release to get the DB to settle for a split 2nd, knock his hand down & stack em: @DeSeanJackson10 🔥🔥🔥 pic.twitter.com/odJgqiq3SS

Johnson also gushed over a violent hitch route by the Philadelphia veteran, a clear sign Jackson isn’t just a one-trick pony despite his reputation as the best home-run hitter since Randy Moss.

Look at this fucking hitch route, same violent outside release with the hesitation showing deep ball then hit the brakes: @DeSeanJackson10 🔥🔥🔥 pic.twitter.com/n3tDWB4912

For the optimists in the crowd, the excitement from Week 1 of the 2019 season returned with visions of Jackson catching bombs from Carson Wentz dancing in their heads. For the hand-wringers, they already looked at Slay like version 3.0 of Nnamdi Asomugha or Byron Maxwell.

Slay himself was forced to add the context that only NFL players and others who have been around for a bit understand.

Johnson joined with some background of his own as a mea culpa for putting Slay on blast to those who don’t know what they don’t know.

"Boss even I know that, the focus was on D Jack being healthy, your feet and foundation aren’t even up under you yet, the casual fans won’t understand that," Johnson replied to Slay. "The film don’t lie, I know what you can do in bump-n-run, I’ve studied you. All love."

One-on-one drills around the NFL are important as a tool to work on technique but they are always weighted heavily toward the attacker when the only goal is defining a winner and loser from those on the outside, looking in.

Eagles offensive line coach and run game coordinator Jeff Stoutland joked about it last August when discussing his offensive linemen -- usually a top-five group in recent seasons when compared to the rest of the league -- having to deal with the pass rushers and reading the eulogies after the fact.

"Everybody wants to watch one-on-ones. That's like going to a gunfight with rocks," Stoutland explained.

For the O-Line, Stoutland highlighted some of the difficulties.

You can extrapolate that explanation to receivers vs. defensive backs. There's no zone waiting behind the defender for the attacker, no bracket coverage, no blitz off the edge with the safety rolling, no passing off if it's an inside route.

As Stoutland would say, "It's just giddy up, let's go.”

Fourth-year cornerback Rasul Douglas was also the victim of a leak when he was pictured getting torched by rookie speedster Quez Watkins.

The folly of that is about the only thing we knew about Watkins before that was his ability to run, highlighted by his 4.35 40-time. Douglas, on the other hand, is a rangy CB with size whose big deficiency is long speed.

You won't need those leaks to know who's winning the one-sided drills when reporters are in practice Monday. Finding out the news also won't be any more or less important unless the context is added, however.

It's common sense — you're not expected to win the gunfight when you are handed a rock. You’re expected to refine your technique regardless of the outcome of the drill.

Think of it like the ace pitcher in baseball showing up in spring training and getting rocked because he's intent on working on the location of a new pitch. The concern quickly evaporates when things get real and you see him mowing down hitters.

So if you're concerned about Slay doing his Izel Jenkins impression or a little too jacked up about a sixth-round pick looking like Moss on one throwaway, pay attention to that previous stock you bought in Ifeanyi Momah or Carlton Agudosi.

If that doesn’t work a certain Presidential hopeful who happens to be an Eagles fan has some sound advice for you: