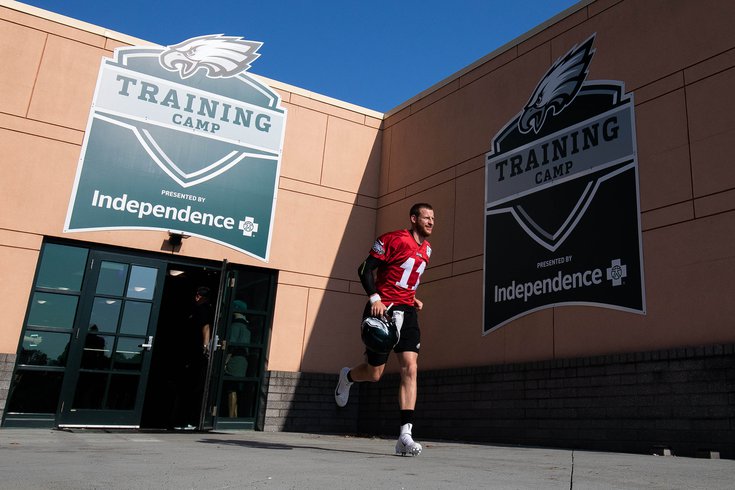 Before the start of each Philadelphia Eagles training camp, I usually put together a list of all the things I'll be watching. And so, I just started publishing them as well. Here are 25 of them for this year.

Wentz already got a high percentage of reps in camp, but they're highly likely to increase even more, given that the team's limited amount of time will lead the coaching staff to prioritize getting the starters ready for the regular season over younger player evaluation. In that sense, it's ideal that this is probably the best Wentz has felt since 2017.

2) It became pretty clear during camp last year that Miles Sanders was the best running back on the team, and by a decent margin. The belief at the time was that he would be a good runner with the ball from Day 1, but had to prove he could be effective in the folowing three areas:

As it turned out, it was the reverse, as Sanders was better than expected in all three of those areas, and he struggled as a runner early in the season, as he got acclimated to the speed of the game in the NFL. As the season progressed, Sanders became a potent weapon both as a runner and receiver, and there will be no such ramp-up this year.

As far as what to look forward to in 2020, I'd like to see if the Eagles intend on expanding his role in the offense, lining him up more in the slot, a la Brian Westbrook.

3) I think we already have a feel for Boston Scott's game. The Eagles will use him in the passing game, particularly in the screen game, and find ways he can contribute. But what if Sanders goes down? Who's the backup who will carry the load? Is Corey Clement back to his 2017 form? Can Elijah Holyfield make an impression? How about UDFA Michael Warren? If nobody steps up, will that force Howie Roseman to explore the trade market?

4) We already got a glimpse that DeSean Jackson hasn't lost his speed. Apparently, Jackson sent video of himself dusting Darius Slay to Chad Johnson:

Hesitation release to get the DB to settle for a split 2nd, knock his hand down & stack em: @DeSeanJackson10 🔥🔥🔥 pic.twitter.com/odJgqiq3SS

Jackson practices hard in spurts, and it looks like he was full tilt to begin camp. There's been a lot of talk about the Eagles' receivers having chips on their shoulders. I'm curious if DeSean will take his yearly couple days off with a hammy, ha.

5) Because of their thin depth at receiver, pressure is going to be on Jalen Reagor to contribute immediately as a rookie. Doug Pederson said initially that Reagor would be focusing on the "Z" position, learning from Jackson. Reagor later contradicted Pederson, saying that he was learning both the "Z" and "X" positions in the Eagles' offense. We'll get a better idea of where Reagor is lining up in 11-on-11's, and what types of receiver combinations Pederson and wide receivers coach Aaron Moorehead are trying out.

6) The other young receivers, John Hightower and Quez Watkins, will be fun to watch too. Watkins appears to be off to a good start in the non-padded practices:

7) Last year, J.J. Arcega-Whiteside had a good camp, and then a good preseason, especially when he had over 100 yards in the "dress rehearsal" game against the Ravens. He looked like he might become an immediate contributor, and then he had a rookie season to forget. Perhaps Moorehead, a former player who goes 6'3 and change, can help unlock Arcega-Whiteside's ability. Moorehead acknowledged that coaching up bigger receivers was easier for him than speed guys like Jackson, which makes sense. The Eagles' last WR coach, Carson Walch, was like 4'9, so maybe J.J. can find Moorehead to be a more useful positional coach.

8) At tight end, we already know what Zach Ertz and Dallas Goedert can do, but can younger guys like Noah Togiai and Caleb Wilson challenge Josh Perkins for the No. 3 TE job? They both have some receiving ability.

9) Along the offensive line, the biggest storyline will be Andre Dillard, who had a rough rookie season, but who the team is entrusting to start at LT, at least for now. As a rookie, he played with quick feet, but his biggest weakness, by far, was anchoring against power rushes. Teammates and coaches have said that Dillard got stronger this offseason. We'll see.

10) Moving from tackle to guard isn't necessarily a big deal, but moving from tackle to guard, while also moving from the left side to the right side, after playing LT for a decade and a half, will be a difficult challenge for Jason Peters. It'll be interesting to see how comfortable he looks playing on the right side, and having to learn how to "wipe with his non-dominant hand," as Jordan Mailata once put it so eloquently.

Eagles OT Jordan Mailata on the difficulty of switching sides on the OL...

“It’s like wiping your backside with your other hand... It’s not going to be clean, but it gets the job done.”

11) Isaac Seumalo had a strong finish to the season last year, but he has yet to play well from beginning to end. The belief here is that 2020 will be the year he puts it all together and has a great year. That'll start in camp.

12) This is the first year in a while in which the Eagles will head into training camp with concerns about their offensive line depth. Just from a pure "depth chart" perspective, it'll be interesting to see what the second team OL looks like. My guess:

We'll see how that changes as we go along.

13) Will the new ideas of coaching staff additions such as Rich Scangarello and Andrew Breiner be obvious? Will we see their influence in camp, or will that have to wait until the regular season?

14) Derek Barnett had 7 sacks in 14 games a year ago, but generally speaking, Eagles observers are still waiting for him to break out. Coming into the NFL, Barnett's go-to pass rush move was his dip around the edge, and he didn't have much in the way of inside counter moves. Over the last three years, Barnett has subtly built up that pass rush repertoire. I'll be looking to see if there is a specific move or two that he is focusing on.

15) The top four defensive ends are clearly Barnett, Brandon Graham, Josh Sweat, and Vinny Curry. And then there are a bunch of guys thereafter with questions to answer. Can Genard Avery's play demand that Jim Schwartz find a role for him in the defense, or will he just become something of a misfit of the defensive scheme? Will Joe Ostman recover fully from his ACL tear and pick up where he left off last camp? Can Shareef Miller prove that deserves a seat at the table?

16) Again, simply on depth chart curiosity, who will be the the linebacker opposite Nate Gerry when the Eagles are in nickel? T.J. Edwards will get playing time on run downs, but will he be relegated to that type of narrow role due to concerns about his athleticism? Will Duke Riley's experience win out over rookies like Davion Taylor and Shaun Bradley?

17) Darius Slay is going to follow the opposing team's No. 1 receiver at times this season, but the challenge for Schwartz will be how the Eagles' defense can do that while also not giving away tells on whether they're in man or zone from play to play. Schwartz said that he would let Slay pick a receiver to follow in practice, and they would work on how to disguise the play call.

18) In his first two seasons, Avonte Maddox has played outside corner at times, but he has never headed into a season as a likely starter on the outside. He'll have no problems handing that challenge mentally, but can he man up against bigger receivers? Unfortunately, the Eagles don't have much in the way of bigger receivers who can test him, with Alshon Jeffery on PUP.

19) It's now or never for Sidney Jones. He has to have a good camp this year and regain Schwartz's trust. Also, can Rasul Douglas create enough buzz to coax trade interest in him?

20) One of the under-discussed players heading into 2020 is Nickell Robey-Coleman, who projects as the starting slot corner. In 2017, Patrick Robinson had one of the worst starts to camp I've ever seen, but he turned it around late, and had a fantastic season. Robey-Coleman is a player the team is high on.

21) Jalen Mills has some huge shoes to fill, transitioning from corner to Malcolm Jenkins' safety role, though in a way, it might actually be an easier assignment than his previous role as the "shouldn't be the" No. 1 corner.

22) In the deep safety role, Rodney McLeod was at least partly culpable for his share of big plays allowed last season, but the team feels that being another year removed from his ACL tear should give him more speed. We'll see.

23) The Eagles added a few new safeties, in K'Von Wallace, Will Parks, and UDFA Grayland Arnold. In 2017, we pointed out that Schwartz isn't afraid to play rookie defensive backs early. If Wallace earns Schwartz's trust early, can he play a significant role in the defense, and possibly even challenge Mills and/or McLeod?

24) With all the new players (or players with new roles) in the secondary, new defensive backs coach Marquand Manuel has his work cut out for him. Cory Undlin was always fun to watch in practice, and even though many were underwhelmed by the results at times, his hiring as the Lions' defensive coordinator didn't come as a major surprise. How will Manuel make it all work, and will a new voice wake up a guy like, saaaayyy, Jones?

25) And yes, as always, I'll be watching Jake Elliott and Cameron Johnston more than I probably should.