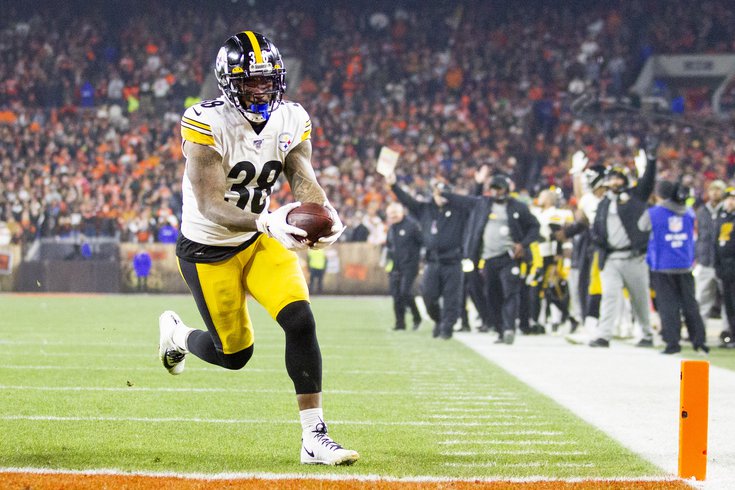 Everyone loves a nice hypothetical, "throwing darts" type of unlikely to actually happen "trades that make sense" post, right? Cool. Let's do one of those, and thanks for the clicks.

In college at North Carolina State, Samuels played a little bit of everything, from running back, to fullback, to wide receiver, to tight end. He was an intriguing utility prospect in the mold of Trey Burton.

In Pittsburgh, Samuels has mainly been a backup running back who had a really nice rookie season as a runner, followed by a not-so-great 2019:

Here's a 2018 game against the Patriots in which he racked up 172 total yards. Note the play in which he lines up out wide and beats All-Pro safety Devin McCourty on a slant route.

Within the Eagles' system, Samuels would make sense as a utility player who has some bulk to handle tough inside runs, while also serving as something of an upgrade to Josh Perkins as a No. 3 type of tight end, and of course, on special teams.

It's noteworthy that Ed Bouchette, a Steelers beat writer for The Athletic, did not have Samuels making the final 53-man roster.

What's the appeal for Avery to Pittsburgh? The belief here is that he is not a 4-3 DE, and his appeal is that he can maybe be a hybrid linebacker / stand-up blitzing pass rusher, and an inside linebacker sub-package role in the Steelers' scheme is probably a better fit for his strengths.

In the same way that Jim Schwartz likes his safeties to have cornerback experience in their backgrounds, the team has added their share of linebackers with safety experience, such as Nate Gerry, Davion Taylor, and Kamu Grugier-Hill, to name a few.

White was a big-hitting safety/linebacker hybrid at West Virginia, who is now an undersized linebacker at 218 pounds for the Chargers. In 2019 as a second-year player, White played in all 16 games (starting seven), playing 38.2 percent of the team's defensive snaps. He made 40 tackles and broke up two passes.

In the 2020 draft, the Chargers selected Kenneth Murray 23rd overall. In the 2018 draft, they selected Uchenna Nwosu 48th overall. They also signed Nick Vigil to a fully-guaranteed $2.4 million contract worth up to $3 million this offseason, and already employ Denzel Perriman, who has started for the Chargers since 2015. In other words, they have a surplus of linebackers.

One of the biggest needs the Chargers had heading into the 2020 draft was at offensive tackle, which they did not address. Mailata could become a new project for another team.

After the Jets selected him with a fifth-round pick in the 2019 draft, Cashman was having a nice rookie season (40 tackles, 3 TFL in seven games) until he went on IR with a shoulder injury. He is slightly undersized, but has the athleticism the Eagles prioritize at linebacker:

The Jets, meanwhile, could use plenty of help at corner, and we know that Joe Douglas has some level of affection for Sidney Jones and/or Rasul Douglas. If he still likes either guy, take your pick, Joe.