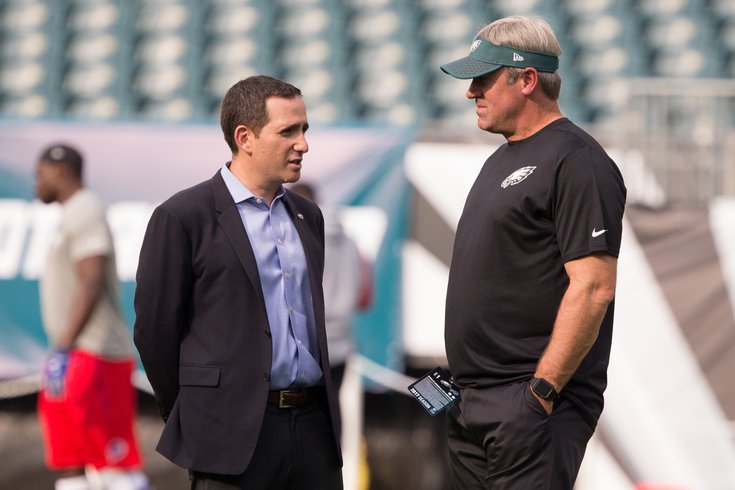 Philadelphia Eagles training camp has already (kinda-sorta) begun, and on-field, full-team practices will kick off this week. And so, let's go ahead and project the 2020 roster now, and see how things change over the next month.

(In addition to the written text below, Brandon Gowton and I recorded a podcast to analyze what we each believe the 53-man roster will look like (his is here). Here's the iTunes link. Rate review subscribe, etc.)

The Eagles had draftable grades both on Warren and Killins, so they shouldn't be ruled out over Holyfield, or even Clement, if Clement isn't fully healthy. Warren is better positioned to make the roster over Killins, in my view, because he would give the Eagles an inside running element to complement the more explosive Sanders and Scott.

Holyfield is sort of the forgotten guy, but the Eagles wanted to get a look at him badly enough that they added him to the active roster during their stretch run last season, even if he wasn't realistically going to play, so we'll give him the nod as the RB4.

Of course, the Eagles have clearly had their eye on adding another back this offseason, and that remains a good possibility.

Cuts (4): Deontay Burnett, Robert Davis, Manasseh Bailey, Marcus Green (not technically on the roster at this time, but is reportedly signing back with the team)

I had the Eagles keeping seven WRs before Marquise Goodwin opted out of the 2020 season. Now, it's easy to simply keep Jackson, Arcega-Whiteside, Ward, and the three drafted rookies, with Alshon Jeffery beginning the season on the PUP list.

Perkins does nothing for me, but for some reason the Eagles like him. Togiai and Wilson both have some receiving ability, but they can also pretty easily just be stashed on the practice squad.

The first seven guys noted above are locks. As for the final two, Wanogho has a leg up being a sixth-round pick, and Herbig managed to stick on the 53-man roster for the entirety of the 2019 season as a possible backup to Kelce at center. Herbig's spot is tenuous, however, because the Eagles had a draftable grade on Juriga, and gave him a big bonus to sign as a UDFA.

The noteworthy cut here would be Mailata, who the Eagles would assuredly want to keep on their practice squad, should he fail to make the 53-man roster. The bet here is that some other team would snatch him up if the Eagles cut him.

And then there's Opeta, who the Eagles called up to the 53-man roster last year after the Dolphins tried to poach him. The Eagles would probably like to keep him, but there just isn't a lot of room on the roster.

Graham, Barnett, and Sweat are the top three DEs, and Curry is going to make the roster after the Eagles guaranteed $1.3 million of his salary. The Curry signing is bad news for guys like Avery, Ostman, Miller, and Toohill, who will have to battle it out for a fifth defensive end spot, if the Eagles even keep five DEs.

The bet here is that Avery will win that final spot, since the Eagles gave up a fourth-round pick for him at the trade deadline last year.

Williams had a draftable grade from the Eagles, so I don't think that it's a no-brainer that Ridgeway will beat him out, but we'll give Ridgeway the advantage there for now. Rush is also a player to watch, since he gives the Eagles a unique body type, in that he's huge, at 350 pounds.

I had Jatavis Brown on the outside looking in, so his surprise retirement on Sunday doesn't affect my linebacker situation in any way.

Slay, Maddox, and Robey-Coleman are locks, and Jones isn't far behind, if only because the Eagles have already invested so much in him. LeBlanc should also be on solid ground, but I wouldn't call him a lock.

The difficult choice here is whether Douglas makes the team or not. He took a pay cut earlier this offseason to keep from getting cut, so that'll help. He has also played in 46 games (starting 18) in his three years in Philly, and the Eagles sure do like familiarity. The bet here is that the Eagles will go heavy at corner, given their extreme injury history at the position over the last few years.

Arnold is my lone UDFA to make the team. He is smaller than ideal, and less athletic than ideal, but he is very instinctive and had great production at Baylor. He played some safety and corner in college, and it appears that he'll be playing safety for the Eagles, if getting a shout out from Rodney McLeod is any indication.