Mailbag: Handicapping the Eagles' rookies' chances of making the team 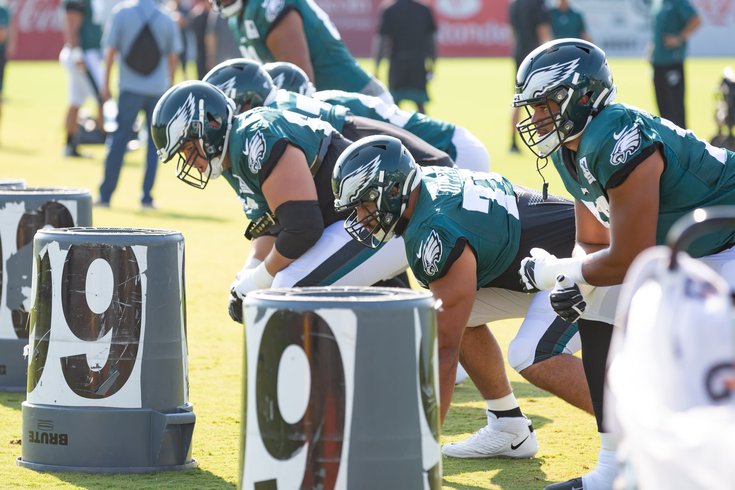 Question from Lord Buffington: Scale of 1-10 (1 low, 10 high) of confidence that each of the draft picks makes the roster.

• I would say that Jalen Reagor, Jalen Hurts, Davion Taylor, and K’Von Wallace have almost no chance of getting cut, so we’ll call them all 10’s.

• The two other rookie receivers (John Hightower and Quez Watkins) would have to be absurdly bad to get cut. Back in 2017, Shelton Gibson had one of worst camps I’ve ever seen a rookie draft pick have, and he still made the team. So they’d really have to show nothing both on offense and special teams to get cut. I’ll call them both 9.7's.

• Shaun Bradley is in a good spot because the team has no depth at linebacker at all, and his speed should at least keep him in play for special teams work. It is noteworthy that the Eagles cut Nate Gerry once upon a time, and he was a fifth round pick. I’ll call him a 9.6.

• Prince Tega Wanogho is interesting. He would be my top phantom injury IR candidate, seeing as he got flagged for injuries at the Senior Bowl this year, and wasn’t allowed to play. Does a trip to IR count as not making the team? If so, I’ll call him a 7.

• And then the only draft pick I think has a better shot of getting cut than he has of making the team is Casey Toohill. There simply isn’t much room at DE, so he would have to stand out in camp, as opposed to the guys above, who really only have to just not be awful. I’ll say Toohill is a 3.5.

• As a bonus, the one UDFA that I would give a better than 50-50 chance of making the team is Grayland Arnold. I'd have him as a 6.

Question from Leo Pien: What are the roles that our young/rookie offensive linemen are focusing on? Nate Herbig should be competing with Juriga for the backup C role, but Herbig is listed at G. Driscoll said he was focusing on playing OT (was listed as OT as well), but with the return of Jordan Mailata will he practice another OL position?

• Driscoll will mostly work at RT for now, though the team views him as a guard/tackle prospect, who may also eventually get some work at center. Mailata's brief absence had no effect on any player.

• I think Wanogho is mainly competing with Mailata for a roster spot, and I think both guys will mostly focus on LT. The guess here is that Mailata will work with the 2's initially, and Wanogho will be with the 3's. To be determined if the Eagles will continue to try to give Maialta work at RT, where he was uncomfortable last year.

• And yes, Juriga will compete with Herbig. I wouldn't get too caught up on on the Eagles listing Herbig at OG and Juriga at C. Think of them both as "interior offensive linemen," in that they'll probably both get work at guard and center.

Question from Johnny: Which rookie, outside of Reagor, needs to contribute most this season?

I think it's Wallace. That's a guy who played for a Clemson program that went to three of the last four College Football Playoff National Championship games. He won't be fazed by the NFL like a lot of other rookies can be at times, especially since he went up against stud receivers in practice every day.

I liken him a little to Jalen Mills, in that Mills got to the NFL and probably found the Eagles' receivers to be easier to cover in practice than what he had to deal with every day in college at LSU, when he had to face Odell Beckham and Jarvis Landry.

Wallace won't start initially, I don't think, but he should have a role early as a rookie.

Question from aquaman: What position was a weakness last year that could become a strength?

The addition of Darius Slay is going to go a long way toward fixing some of the Eagles' issues at corner. No. 1 receivers absolutely killed the Eagles last year, and as we know now, Jim Schwartz is going to allow Slay to travel with the opposing team's best receiver when it makes sense to do so.

And then I also think that the addition of Nickell Robey-Coleman is sort of an underrated one. He's a fun player to watch, and should be good in the slot.

Question from Songbird Rescue Cat: How likely is Corey Clement to make the roster over some others like Elijah Holyfield or Michael Warren? Corey had a total of 4 touches last season, all returns, and fumbled twice.

Clement has dealt with injuries the last two seasons, obviously, but if he's truly healthy now, I think that guys like Holyfield and Warren have to definitively outplay Clement to beat him out, and not the other way around. Right or wrong, the Eagles love them some familiarity.

Question from Jon Connor: Cre’Von LeBlanc is one of my favorite underrated players from the last two years. What do you realistically think happens to him this year?

I think he's the backup slot. It should be noted though that Schwartz played him over Rasul Douglas and Sidney Jones in the playoffs last year, if that gives any sort of indication of his standing on the team.

Question from Big Mike McD: Hi Jimmy! I'm Mike, first time long time. Which new players or scenarios do you see yourself having the most fun making stick figures for this year? Thanks for taking my tweet, I'll close this and wait for your response

Well, this will have to wait until the regular season, of course, but maybe Slay's tackling? Ha.

Question from Vince Arganetto: Will any position possibly be as bad as the Phillies bullpen?

I would say linebacker, but that position just doesn't get exposed in the same way that others do, so I'll go with wide receiver. If DeSean Jackson gets hurt, they are extremely inexperienced there.