Eagles already dealing with a pair of substantial injuries on defense

When will Derek Barnett and Javon Hargrave be back? Here's what we know... 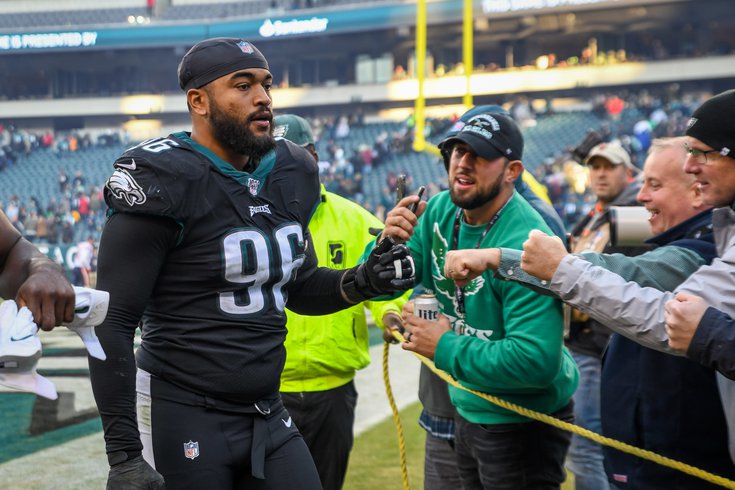 On Monday, reporters were finally allowed access to the NovaCare Complex and observe training camp practices for the first time in this odd COVID-shortened offseason. The players, meanwhile, have already been back at the facility working out since late last month, but the only updates we've been getting from those practices have come from the players themselves.

And, while they were happy to tell us about DeSean Jackson's exploits or Miles Sanders' speed, they failed to mention the fact that a couple of starters have already suffered injuries that kept them off the field on Monday. Of course, that's to be expected, but once reporters showed up this week, there was no more hiding and the Eagles announced the following injuries just as the players were taking the field for practice.

The team's prize free-agent acquisition (and probably the biggest addition of the entire offseason aside from Darius Slay and maybe Jalen Reagor) will be out for multiple weeks with the Eagles are calling an "upper body" injury. Part of the deal with the league regarding their COVID-19 compliance was that injury description would be much more vague and would take the form of what we've come to expect from ice hockey. Beyond that, we don't know much about the big defensive tackle who signed a three-year, $39 million contract this offseason.

The good news is that the Eagles still have Fletcher Cox and (a healthy) Malik Jackson pencilled in to start in the middle of the defensive line, but with how Jim Schwartz likes to rotate his lines, the former Steeler is expected to get plenty of burn in 2020.

There's no knowing how long ago he was hurt, what his injury is, or when he might return, but the "multiple weeks" designation makes it seem like it might be tough for him to get back up to speed by the time the Eagles visit Washington for the Week 1 matchup. That's less than four weeks away at this point, and he presumably still needs to get up to speed in his new defense after a summer of off-field work that only recently moved onto the field.

UPDATE [12:44 p.m.] — On Monday afternoon, Hargrave tweeted the following, which is certainly cryptic but also doesn't seem like the kind of thing you'd tweet if you suffer a minor injury.

Everytime I hit the ground I bounce up like roundball 🔥

While Doug Pederson spoke before practice and therefore was not asked about Hargrave's injury, Fletcher Cox was asked about it during his media session after practice.

That's the ultimate non-answer, but all the vagueness around this injury probably isn't a good sign.

UPDATE [5:39 p.m.] — According to ESPN's Tim McManus, Hargrave has a strained pectoral and will be out for several weeks. However, it's not the worst-case scenario, as it will not require surgery and the team seems set on having him back for Week 1.

Eagles DT Javon Hargrave will be sidelined for multiple weeks with a pec strain, according to sources. The injury does not require surgery. Team is focused on getting him ready for the regular season.

Adding to this: #Eagles were initially concerned it could've been a tear, felt they dodged bullet that it's just a strain. Happened during weight training, not on field. https://t.co/QUCU9R4kh6

Let's stay on the defensive line with Derek Barnett. Barnett is listed as week-to-week with a lower body injury, but again, that's about all we know. The 24-year-old defensive end is scheduled to start across from Brandon Graham, and with a few weeks remaining before the season commences, there's a chance the Eagles are just playing it safe with Barnett. He knows the system and the player he'll be lined up next to, so there's not a huge urgency to rush him out onto the field.

Knowing how precarious this season already is and how depth will be key to any team's success in 2020, it wouldn't be totally surprising if they're allowing him to rest with an eye on him returning in time to have a short ramp-up period before the opener. Still, the sooner he's back out on the field, the better it is for the entire defense.

The news on the offensive side of the ball wasn't as bad, as both Peters and JJAW are listed as day-to-day with lower body injuries. On a more positive note, both were seen on the sidelines on Monday in shorts and jerseys (no pads) for the early part of practice. It doesn't seem like there's any major reason for concern here.

However, when it comes to Peters, fans may be used to him getting customary days off at practice to keep the 38-year-old future Hall of Fame lineman fresh. But this offseason, he's switching positions for the first time since he moved from tight end to offensive tackle early in his career. There's no doubt he'll be able to pick up the slight difference of playing a different position on the opposite side of the line, but the more on-field work he can get, the better. Of course, his health has to come first.

The Eagles linebacker is out with an illness, but hasn't been added to the COVID-19 reserve list, so that's about all we know for now. It could be an entirely different illness, but it's worth monitoring nonetheless as the team prepares for the season.

This isn't a new injury or anything, but head coach Doug Pederson did provide an update on Alshon Jeffery on Monday, as the wideout continues to work back from foot surgery last year.

"Alshon is doing extremely well," Pederson said. "Obviously, as you guys know, there's no timetable for him. We're just trying to make sure that he's 100 percent before we return him to action. But he's doing extremely well, and he's progressing nicely where we want him to be at this particular time, and he continues to progress in the right direction."

When he returns to the field remains unknown, but with the Eagles still being very thin at wideout, the sooner the better.

It also appears Andre Dillard went down with an unknown injury.

Andre Dillard taken out of drills, replaced by Mailata. Went to ground on play earlier. Slapped helmet in frustration on sideline.

I'm sure Pederson will be asked about his status (as well as all the other players listed above) next time he speaks to reporters.