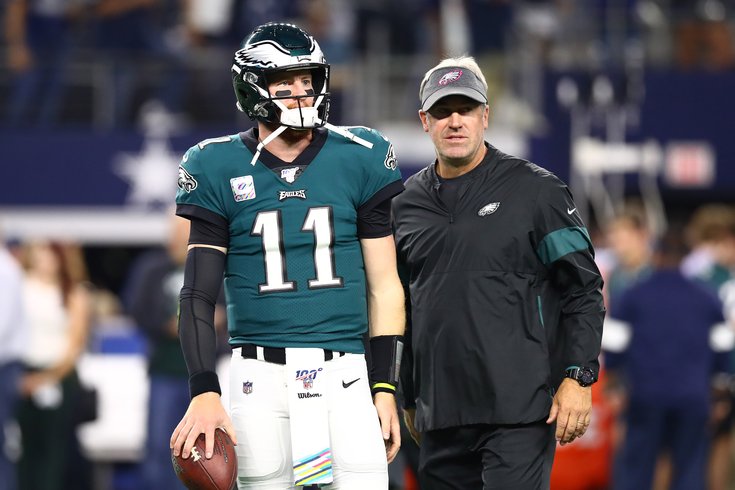 The NFC East is right in front of Carson Wentz, Doug Pederson, and the Philadelphia Eagles.

Those are the questions surrounding the Eagles after a confounding season-opener in which Carson Wentz looked like an MVP-caliber player early in the game and turned into a pumpkin after about 28 minutes of football. It was so dramatic of a turn, Jekyll-and-Hyde seems too mild a description. It was more like the EKG of a massive heart-attack victim.

The biggest problem isn't one loss, even to a bad football team. It never is.

There are always crutches to lean on for any quarterback's struggles, often legitimate ones, and Doug Pederson had plenty of teachable moments stemming from a stunning 27-17 setback to the Washington Football Team.

It started with his makeshift offensive line flailing against the dominant WFT front. From there, the pass protection from the backs was even worse than the line's, the rookie receivers ran routes like rookie receivers and fought for the football like it was the most delicate of Faberge eggs. More so, Pederson himself pressed pause on DeSean Jackson for large portions of the action as if the idea of January football is a birthright.

The coach started his Monday presser with an NBA-like mentality of a make-or-miss league when talking about Wentz’s turnovers.

“We just missed,” the coach insisted. “We missed on a throw. The throw was -- came out of [Wentz’s] hand after watching the tape kind of slowing things down. Looked like it came out of his hand, ball could have slipped a little bit coming out of his hand. It was left inside. So it happens.

“Those are things that are going to happen. Especially when it's warm and it just is part of the game. It's just going to take place.”

When pressed Pederson insisted the aggressiveness stays even at the expense of sensible game-management skills. After all, it wasn’t an unconscious Aaron Rodgers or Patrick Mahomes facing the Eagles in Landover, it was second-year pro Dwayne Haskins and an offense whose most explosive play on the afternoon was all of 21 yards.

“You have to -- especially when you have momentum, right, and it's kind of on your side. You've got to use that to your advantage, and my thinking at that time, too, was to try to get points before half with the ball to start the third quarter. We've done that many times here where we've scored and then come out and scored touchdowns to start the third quarter. That's a lot of my mindset in these games.”

That’s actually a solid mindset right up until it isn’t and it wasn’t on Sunday against that opponent. Analytics [as an aside, can we please call it data science moving forward?] are meaningless unless the information is actionable in the moment.

Any optimism moving forward for the Eagles involves the players who weren't playing in Landover, most notably Lane Johnson and Miles Sanders, calming down the issues with their talent, something that will, more than likely, start Sunday against the Los Angeles Rams.

Johnson is the best right tackle in football and his presence has been vital to any success in the Pederson era.

Eagles under Doug Pederson
(including playoffs):

Sanders, meanwhile, isn’t exactly Emmitt Smith in his prime when it comes to picking up the blitz but he might as well be when compared to Boston Scott or Corey Clement.

Win or loss on any game day, however, is the white noise obfuscating Wentz's fatal flaw which seems ingrained in his DNA as a player.

If you rewind to Wentz's early years you might recall Frank Reich or John DeFilippo discussing the quarterback's stubbornness, a trait that's almost a drug from a football standpoint, able to provide the highest of highs and the lowest of lows.

Confirmation of that nature was gleaned from Mike Groh and Pederson himself in ensuing years.

With Wentz the hard-headedness means extending the play at all costs and searching for the home run. Typically home-run hitters hit a lot of them but what they also do is strike out, sometimes in really big spots.

In Wentz's case you saw all that encapsulated into one game, the intoxicating big plays coupled with the interceptions and yet another fumble, his 50th in 57 career games.

Everyone in their life should have someone who loves them like ESPN analyst Dan Orlovsky loves Wentz and even the former NFL backup was forced to call out Wentz for his game-management skills both after the contest and on overreaction Monday.

Everyone knows I think @cj_wentz is spectacular-this is the first play I show him tomorrow. He’s too good. He’s too experienced. He’s too mature to let this happen-
This is sack #2 in game

YOUR ORG NEEDS TOU TO GET RID OF THIS PLAY—TONIGHT! pic.twitter.com/JLCLpTXqYO

Pederson himself also noted the issues needed to be addressed.

"We still have to continue to address him and to address those issues. It's part of the football game," Person said of the turnovers. "We just have to keep talking that it's okay to throw the ball away. It's okay to dirt the ball on a screen pass or something of that nature and look, it's something that we've just got to continue working through.

"There is a fine line, obviously, as we know, between the aggressiveness, but at the same time, we want to be smart."

The change mid-week seemed to be shifting the blame to a lack of success on first downs.

Pederson started the narrative when discussing the stationary nature of the game plan for the QB against the WFT and Wentz dutifully followed.

“Listen, everything we do, obviously it starts with first down and if you're not positive on first down, it now affects what you do on second down and then it affects you on third down or fourth down,” the coach explained.

“I got to do a better job protecting the ball,” Wentz acknowledged later before pivoting to the first-down troubles. “We had a lot of negative plays on first down and that put us in really tough situations. We had way too many third and, really, extra longs. Negative plays really affected us and that was everyone across the board.”

Pederson also seems to understand that the party line is starting to sound like lip service.

“You're probably going, well, it's a broken record," he admitted right before picking up the needle and playing the same scratchy 45.

"... We have to continue to discuss and continue to talk with him about it, and look, if he's holding the ball, there's a reason," the coach explained. "There's a reason, maybe we've got to coach the routes better. Maybe I have to call a play better. I've got to put our team in a better situation. There's all types of scenarios and possibilities on every play, and it's all about the communication that we have throughout the week."

On the surface the Eagles continue to believe Wentz can and will be smarter with the football.

"I do believe he can learn that, and I do believe that we can continue to coach it better," Pederson surmised.

Pederson's take is the serene duck on the lake who looks so peaceful to anyone passing by. For public consumption, everything looks and feels calm but underneath the surface of the water is that same duck paddling furiously to stay afloat.

When it comes to Wentz the question at the NovaCare Complex is whether anyone can change their DNA.

That obvious answer to that query might be the harshest of realities for the Eagles and why the organization used a “luxury pick” on Jalen Hurts back in the spring.

-John McMullen is the NFL Insider for JAKIB Media, the host of “Extending the Play” on AM1490 in South Jersey and also contributes Eagles and NFL coverage for SI.com. You can reach him at jmcmullen44@gmail.com