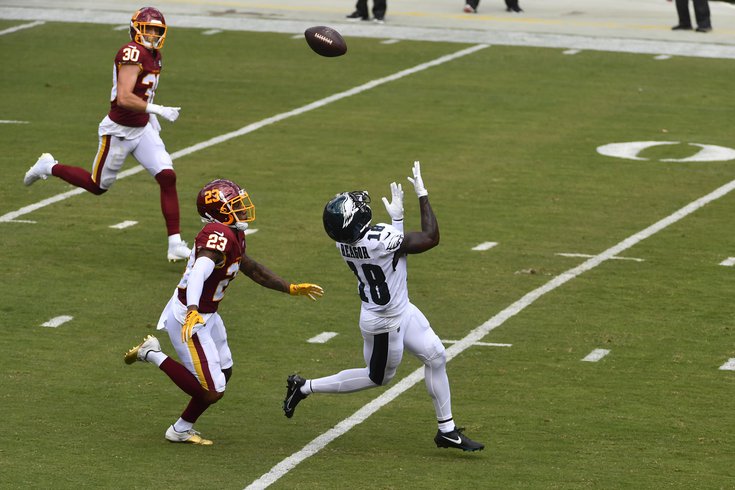 The Eagles lost in Week 1 and everyone is panicking. Sportsbooks oftentimes give a more non-partisan glimpse at the pulse of a team, and as we'll provide every week, here's a look at how Philadelphia's chances at winning the Super Bowl and NFC East — as well as a few player props — have changed since last week.

The Eagles opened their campaign at +2000 to win the Super Bowl, according to TheLines.com's FanDuel offerings — a number actually tied for the sixth best in the NFL.

Oh, what a difference a week makes.

After blowing a 17-point lead and showing ineptitude in a variety of areas, including quarterback play, the Eagles are now at +2600. Their odds of winning the Super Bowl have plummeted all the way to 13th of 32 teams.

Their NFC championship odds took a similar plunge, the experts at TheLines.com project, falling from +1000 to +1300. And in the NFC East, a likewise fall from +130 to +165 followed.

For maximum effect, lets take a look at those numbers in a table:

Carson Wentz threw two bad interceptions, had two fumbles (one lost) and went from looking like an MVP quarterback to turnover machine in the space of just a few minutes.

Before the season started, Wentz had a real, albeit second-tier, shot at winning MVP with +2000 consensus odds from TheLines.com. He was the sixth quarterback on the list and was ahead of star QBs like Tom Brady and Aaron Rodgers.

One bad performance, and he's now at +3555, 13th among all players after being leap-frogged by Brady, Rodgers and several others.

Miles Sanders' shot at offensive player of the year is almost impossible now, as he sat out the first game and the Eagles offensive line was torn apart. His odds heading into Week 2 — with hopes that he'll play — are a meager +8400, via TheLines.com.

Jalen Reagor had just one catch in Week 1, but it was a 55-yard bomb. His inclusion in the Eagles offense is a rare bright spot from their loss to Washington, and his rookie of the year odds are still in the realm of reasonable at +3300. He started the year at +2800, but stellar performances from Kansas City's Clyde Edwards-Helaire and the starting role for Indy's Jonathan Taylor have lowered his likelihood.

Before the season starter, our Matt Mullin took a look a five over/under stats from TheLines.com and took a stab an predicting whether the Eagles stars would exceed the listed milestones. Here's a tracker on each one:

Obviously, Sanders sat out Week 1. He'll have to pick up the pace to hit this number, but 15 healthy games could be enough since we predicted he'd hit the over.

Two touchdown passes per game would equal 32 (#math). Wentz is on pace to beat the over, and get close to the Eagles record of 33 in a season — set by Wentz himself in 13 games back in 2017.

If Reagor eclipses 50 yards per game in every game this year he will more than surpass the 650.5 number provided by TheLines.com.

Ertz had a touchdown Sunday and is obviously in good shape to score more than six, as of right now. However, the emergence of Dallas Goedert, who had more targets, catches and yards than Ertz at the tight end spot (plus a touchdown of his own), does make this a very much 50/50 number still.

They lost in Week 1. Enough said.