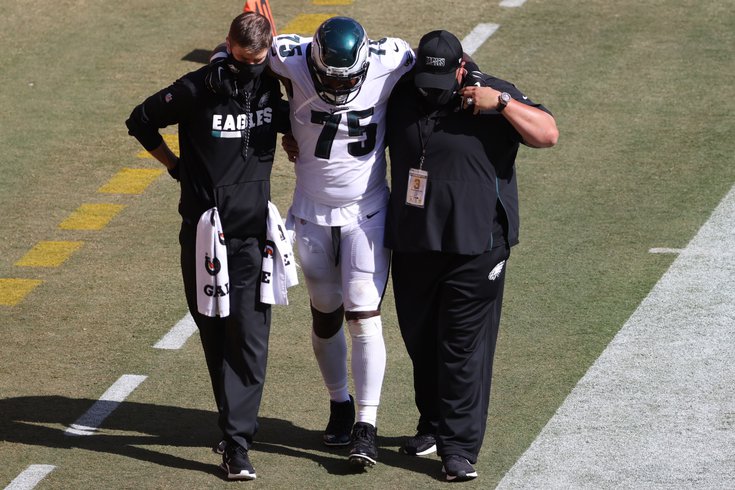 Philadelphia Eagles defensive end Vinny Curry is helped off the field after being injured against the Washington Football Team.

The Eagles went into the opening week of the 2020 season with a lot of injuries (that don't all need to be rehashed here) and even more question marks heading into their Week 1 matchup against Washington. Then, a day before the game, Miles Sanders and Derek Barnett were ruled out. When the inactives came out, it was revealed the team would also be without right tackle Lane Johnson along an already patch-work offensive line.

And by the time the game ended, a 27-17 embarrassment in Landover, Md., things were not looking any better for the Eagles, who had suffered a few more injuries in the loss.

Two of those injuries, the ones suffered by defensive end Vinny Curry and cornerback and special teams standout Craig James are "significant," according to head coach Doug Pederson.

"Vinny [Curry] and Craig James both have significant injuries," Pederson told reporters during his Monday Zoom press conference. "They're going to miss some time here in the next couple of weeks, so I don't anticipate either one of those back [for Sunday]."

That's not good news for the Eagles.

[UPDATE: Vinny Curry and Craig James have been placed on IR.]

Craig James was one of the Birds best special teams players and was also a depth cornerback for Jim Schwartz' defense. While he may not get the attention of some of the other players on this team, he (along with Cameron Johnston) is part of the reason the Birds have been so solid on punt coverage in recent years. And the worry here is that he's one of the guys you don't really notice until he's gone.

In regards to Curry, who also could land on short-term IR, it could be more of an issue. The Eagles were already thin at defensive end with Derek Barnett missing the Washington game with a hamstring injury. And then, during the loss, Curry suffered a hamstring injury of his own and Brandon Graham went down with a concussion. Pederson confirmed Monday that the veteran lineman is in the protocol with his status for this week's game against the Rams still in doubt. The Eagles could, however, get a reinforcement if Derek Barnett is able to go on Sunday, but if not, there's a real chance their top three defensive ends will be out and they are looking at a rotation of Josh Sweat, Genard Avery and Casey Toohill against L.A.

Barnett, along with fellow Week 1 holdouts Miles Sanders (hamstring) and Lane Johnson (ankle) will see an increased workload in practice this week as the team tries to get them back into game shape. Finally, some good news.

"On Miles and Lane and some of the other guys — Derek Barnett — we're going to increase their practice time this week," Pederson said. "We're going to see as the week goes on where they are and hopefully they'll be available for the game on Sunday. But, again, day by day with those guys."

Of course, it was day-by-day with them last week and neither was able to go against Washington.

If Johnson can't go, the Eagles are going to be in some serious trouble against a Rams defensive line that features one of the most feared pass rushers in the NFL, Aaron Donald. But after seeing how their backup rushing attack — led by Boston Scott and Corey Clement — looked against a Washington team that struggled against the run last season, missing Sanders again might be just as taxing on the offense, forcing them to throw way more than they need to.

[UPDATE: Lane Johnson told Derrick Gunn on the "Gunn On One" podcast that he plans on playing against the Rams.]

If Sanders' hamstring injury lingers, the Eagles might be wise to add a veteran presence to that running back room, one that can not only fill in for Sanders if needed, but will also offered a different look out of the backfield even when healthy. We've mentioned him plenty before, but hey, as long as Devonta Freeman remains unsigned...

Just got off the phone with free agent RB Devonta Freeman. He tells me, "I'm ready for whatever team needs a vet." Freeman adds, he's currently choosing between 4 teams.

And then there's wide receiver DeSean Jackson, who spent nearly as much time on the sideline as he did on the field. The veteran, who missed most of last season with an abdominal injury, played just 54% of the snaps for the Eagles on Sunday, but according to Pederson, that has less to do with a current injury and more to do with preventing one.

"Obviously he's a big part of the offense, but at the same time, we want to make sure that he's a guy that's healthy and fresh for us down the long haul here," Pederson said. "I think each week, I would anticipate his rep count to increase as we go, and we're going to be smart with him but we also know that he's an explosive receiver for us and we want to get him on the field as much as possible moving forward."

Seeing him go down in Week 1 last season has to be part of the reason behind this move, but you still want to see your No. 1 wideout playing more than 50% of the game. They're thinking is probably 50% is better than 0%, but the trickle-down effect resulted in too many snaps for rookie John Hightower and J.J. Arcega-Whiteside.

With so many of the Eagles current injuries being treated as day-to-day, we'll do our best to keep you posted on their statuses throughout the week leading up to Sunday's home opener at an empty Linc.