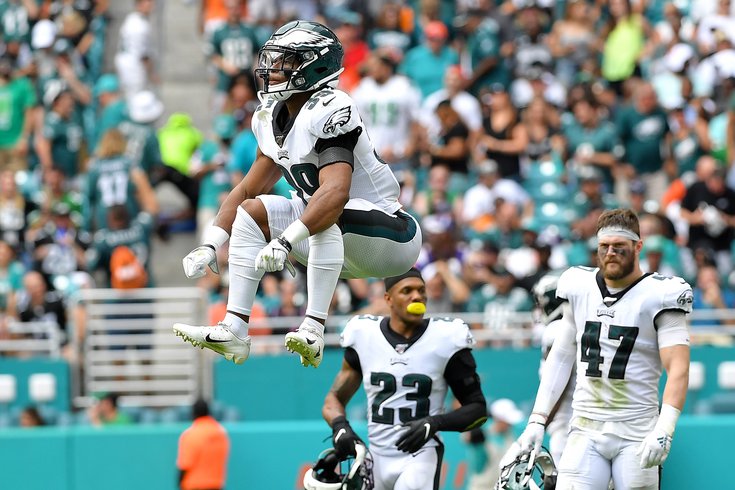 Craig James takes a moment to rest during a game by sitting on Rodney McLeod's head.

The Philadelphia Eagles announced four roster moves on Tuesday, following the team's loss to the Washington Football Team on Sunday. They placed both DE Vinny Curry and CB Craig James on IR, elevated OG Sua Opeta from the practice squad to the active roster, and signed TE Jordan Franks to the practice squad to replace Opeta.

In Week 1, Curry had 3 tackles and a half sack on 22 snaps. He had to be helped to the locker room after reportedly injuring his hamstring.

If he needs help walking, why not just get him a cart? Lol. Anyway, the Eagles are now down to five defensive ends:

If the team believes that Barnett won't play this Sunday against the Los Angeles Rams, then it might make sense to add Joe Ostman from the practice squad, either to the regular 53-man roster, or just as an in-week call-up.

Curry is eligible to return from IR back to the 53-man roster in three weeks.

James earned a roster spot in training camp by beating out Rasul Douglas and Sidney Jones. He was later named a team captain by Doug Pederson. It is reportedly a thigh injury. James is arguably the Eagles' best special teams player.

James' injury will leave the Eagles' somewhat light at corner. One option from the practice squad would be veteran CB Trevor Williams.

Again, James is eligible to return from IR back to the 53-man roster in three weeks.

Opeta was active Week 1 against the Football Team, but he did not play, at least in the regular offense. The Eagles added Opeta to the regular roster when the Dolphins tried to poach him during the 2019 season.

Franks will replace Opeta. He was an undrafted free agent out of UCF in 2018, and he has appeared in six NFL games, all in 2018, with the Bengals. 2 career catches, 37 yards.