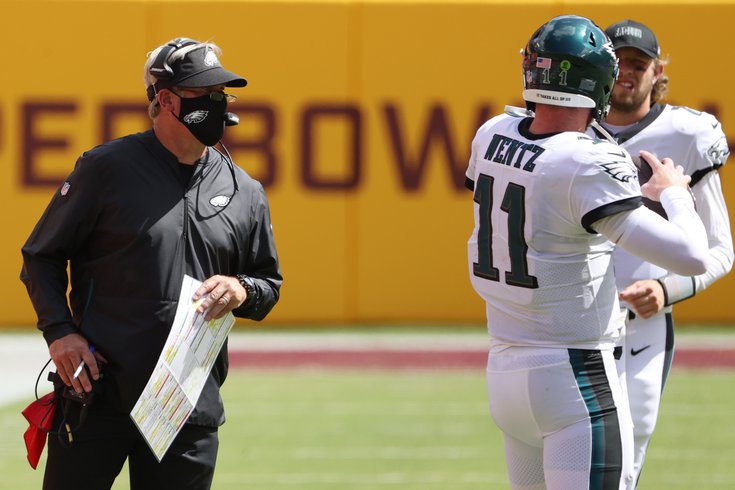 Doug Pederson and Carson Wentz are the main reasons for Sunday's Week 1 loss.

The Philadelphia Eagles blew a 17-point lead against the Washington Football Team. That’s it. That’s the column. What more do you want me to write? What else is there to really discuss about how brutal of a loss it was? It was the most embarrassing loss of the first week around the entire NFL. Even the Jaguars won!

The Eagles were past excuses and circumstances as soon as they went up 17-0 on Sunday. It no longer mattered that both Lane Johnson and Miles Sanders missed the game. We no longer needed to talk about the absence of Brandon Brooks, nor question how Jason Peters would physically hold up during a game.

Instead, we saw the carryover components – from QB to TE – lead scoring charge after scoring charge. The whole idea of “any team with continuity at the QB/skill positions has an advantage in Week 1” was playing out in front of our eyes.

Then what always happens happened again.

This isn’t about anything more than a fundamental flaw – I’m not sure what else to call it since I don’t see it improving – that both the head coach and QB share. This is what we all need to accept as fans of both Doug Pederson and Carson Wentz: they lack a certain feel during the game. This isn’t about breaking down endless tape and drowning you with X’s and O’s inside the Eagles loss; nor is it about sourcing thousands of different opinions on Twitter or the radio. It’s pretty simple when you start with Wentz and then move to the coach.

Russell Wilson is the smartest quarterback in the NFL and you see it on display every single time he takes the field. Bill Belichick is the smartest coach in the league, as exhibited by his ridiculous ability to adapt. Wilson can adapt his style of play, adjust to what’s coming at him, and has an uncanny ability to feel what’s around him. It’s not just the pocket collapsing, but where he and his team are on the field, what’s at stake each play, and how to maneuver through anything that’s thrown his way.

That’s the best way I can break down into words what the “feel” is that seems to be lacking in Wentz. He’s our guy and we support him, but he drives us crazy at times. So often we see a wildly inconsistent Wentz, where even after a stretch of great throws, that one or two come back at the worst time. We see the inability to get rid of the football. The fumbles that persist or bad sacks because he can’t — or simply won't — get rid of the football. There’s just this lack of feel for the game that seems to bite him and cost him big moments.

Again, he’s a super talented quarterback, a lot of guys starting in this league are, but we need him to have that Wilson-type feel in order to get back to the Super Bowl.

Don’t forget about Pederson. His issue centers around what appears to be trying to outsmart the opposition, but instead he winds up outsmarting himself. It’s a common practice other coaches have going up against the hoodie, and yes, I’m aware of the irony that Doug beat him in the Super Bowl, but that year hasn’t carried over to anything today. It’s been quite the opposite, actually. That entire run had anomaly written all over it.

Pederson seems to move away from what’s working in anticipation of the other team figuring it out. It’s maddening to watch someone move away from plays that work, especially when their team is depleted.

Losing a 17-point lead is not on Howie Roseman nor the absence of anyone who didn’t play. It’s on the QB and head coach. They took their foot off the gas and allowed an opening for a bad team. That’s about a certain feel for the game that both must develop, but I’m not so sure they can. I’m definitely not calling for a new coach, nor for Jalen Hurts to play. But we need to accept this harsh reality that a lack of in-game feel by Wentz and Pederson will continue to cost this team down the line.

Bring on the Rams…

The under just missed last time, but we won’t see it nearly as tight this time around. Check out the under 46.5, via TheLines.com, for the Birds/Rams game. It’s the best value you will find for a high enough total and remember, even the Rams struggled to light up the scoreboard last week.

The Eagles should ramp up a little more pressure on Goff, something that’s worked in the past, while LA is preparing for a field day against Philly's offensive line. Washington was good enough for eight sacks, eight! This Rams defensive line doesn’t even need to get blitz help in order to wreak havoc. You will see some scores in there for sure, but the defensive pressure up front will do you wonders in hitting the under.

Episode 1 in the books for Props & Locks on Fox29! Catch the second episode this Friday night at 10:30pm with myself, Scott Grayson, and the always entertaining Sean Bell! We will be loaded with props for the Eagles game and break down two other big value matchups this week. The show will air for the first month Friday at 10:30pm. Then when the station begins to carry TNF, we will be live on Thursdays at 7pm.

There is also another HUGE announcement coming that will be part of what I am doing here at PhillyVoice.