The Birds failed to find success in high-leverage situations, giving their opponents the chance to pull off the upset in comeback fashion 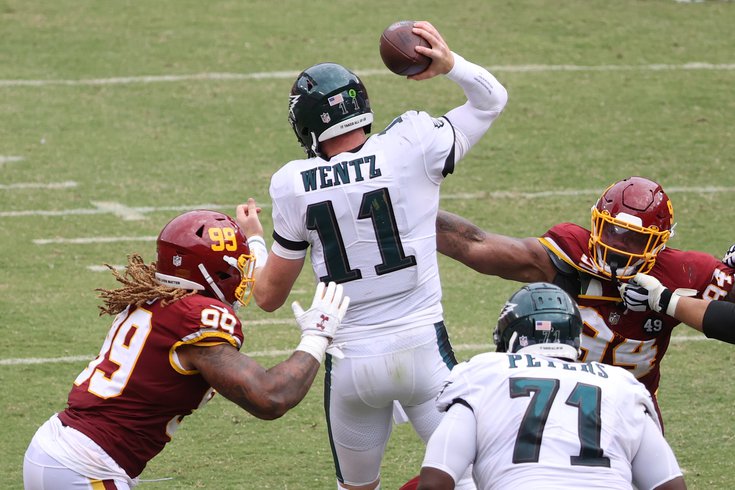 If there’s one thing Doug Pederson has stressed in Philadelphia, it’s situational football. And the Eagles pride themselves on consistent and sustained success in the most high-leverage aspects of the game, things like third-downs and red-zone success.

The head coach of the Eagles and his quarterback needed to expand the definition of situational football Sunday in Landover, MD and failed miserably, allowing an offensively-challenged Washington Football Team to roar back from a 17-0 deficit to win 27-17, one of the largest collapses in franchise history, magnified by it being against a team uniquely unqualified to pull it off.

Consider the WFT amassed only 239 yards at FedExField. It’s longest pass play was 21 yards and it managed 2.2 yards-per clip on 36 carries with a long of only 20 yards. Second-year quarterback Dwayne Haskins finished with just 5.7 yards-per-pass attempt.

So how exactly do you run off 27 consecutive points with those types of numbers and no defensive touchdowns?

Simple, you play with Arena League dimensions. Of course, it’s not like the Eagles were going to stipulate a 50-yard field for the WFT but that’s exactly what happened. Of Washington’s three TD drives, the longest was 48 yards. The others were 45 and 20 yards, a direct result of Carson Wentz miscues, two interceptions, and a fumble.

You could take the obvious route when assessing blame for the setback and target the offensive line that played sieve without Lane Johnson, Brandon Brooks and Andre Dillard. But, remember the Eagles were also leading 17-0 with Nate Herbig and Jack Driscoll both making their first NFL starts.

The thesis here is understanding that situation, right up until Wentz’s first interception to Fabian Moreau at the Eagles’ 45-yard line with 1:37 left until intermission. Haskins and the WFT offense turned that into a TD quickly and went into the locker room trailing 17-7.

“Kind of a tale of two halves,” Wentz admitted. “I have to be better. I know we came out offensively feeling good. … I have to clean up the interceptions.”

Why did the tale turn, though?

Pre-game, Pederson, his offensive coaching staff, and Wentz already understood the strength of the WFT was the defensive line and the pass rush. By halftime, they also had definitive evidence that it was playing out that way and should have looked at the four sacks of Wentz in the first 30 minutes and realized the startup costs the Eagles were enduring with Herbig and Driscoll getting their first extended periods of playing time, something only magnified by Jason Peters’ musical chairs over the summer and Jordan Mailata ultimately coming in for Driscoll due to the latter’s cramps, were only going to continue.

More so, Jim Schwartz and the defense could have told you Washington wasn’t equipped to go 80 yards on a consistent basis, so while it’s somewhat counterintuitive to say take your foot off the gas at any point in the modern NFL, that’s exactly what was needed in the second half on Sunday, even if Cam Johnston became the star of the game.

The goal should have been to force the WFT to go the length of the field even if the result was an ugly win and the opportunity to regroup for the Los Angeles Rams, hopefully with some reinforcements in the form of Johnson and Miles Sanders.

Wentz’s second interception, where rookie John Hightower didn’t exactly fight for the football early in the third quarter, put Washington on the doorstep again, which took only five plays to go 20 yards.

The Eagles were still leading by a field goal at that point with 9:25 in the third quarter and responded, putting Jake Elliott in field-goal range right up until Wentz again failed to realize the smart play and suffered a 13-year sack pushing the football from the 25 to out of FG range at the 38-yard line.

The mishaps continued unabated from there right up until the buses were loaded for the trip back up I-95.

“It was very frustrating walking off that field knowing the momentum and how we felt early in that game,” Wentz said. “We got off early to a great start and it just spiraled out of control and the next thing you know we were in a second-and-15 multiple drives in a row and just couldn’t get ahead of the chains and make plays. Turned the ball over. Gotta protect the ball. It was definitely frustrating walking off that field.”

The situation on Sunday didn’t call for extending the play or Houdini-like escapes. It required a game-manager who understood the opponent and its limitations.

Wentz, however, continued to default to his DNA as a player.

The QB1 contradicted himself a bit later.

“It’s not my job to overdo, overthink or overstress about [lineup changes],” Wentz claimed.

It’s actually the definition of his job.

Schwartz might explain it with a baseball analogy. On Sunday, the home-run hitter wasn't needed. A sharp single would have sufficed.