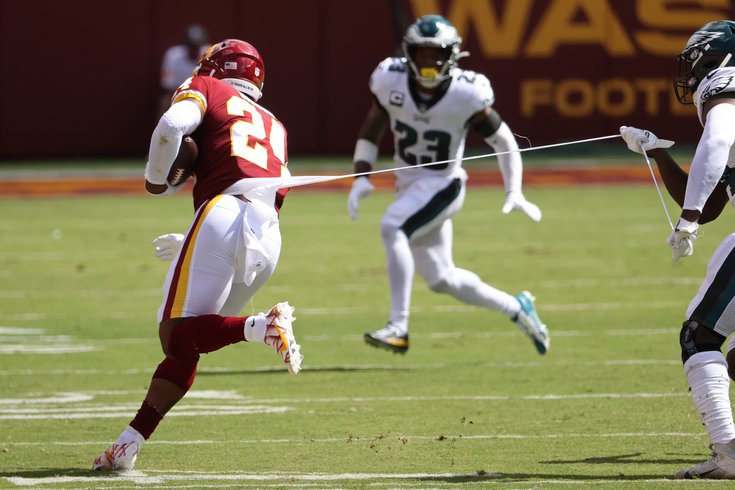 The Eagles had a spectacular collapse in the opening week of the 2020 season, conceding 27 straight points to the Washington Football Team in a 27-17 loss to kick off their season. Get ready for another 15 weeks of this.

• Perhaps the most encouraging sign from the Eagles' offense on Sunday was their change in approach to attacking over the top. Last season, as has been discussed in a million articles and radio shows and television debate programs, the Eagles simply did not produce big plays down the field. They hardly even attempted to do so, with a slow wideout group making it difficult to create the separation they needed.

Even without DeSean Jackson playing a major role against Washington, you saw Carson Wentz dropping back with the intent to look deep for his speed guys. Jalen Reagor already looks like he has changed how the Eagles will attack opponents — after the two connected on a 55-yard bomb for Reagor's first pro catch, they nearly got another huge play in the final minute of the opening half, when Wentz slightly overthrew Reagor on what would have probably been a touchdown.

Seeing those throws made at all is an encouraging sign, as that has long been one of the trouble spots with Wentz leading this offense. Provided the weaponry to make it happen, that might change this season, and it should be a difference-maker if not for...well, we'll get to that below.

• This is where I would write about a strong first game from Dallas Goedert if not for the offense's complete ineptitude in the second half. Tough to write flowery prose about a potential breakout season when the team he plays for crumbles and gives up 27 straight points in a loss.

But hey, Goedert had 100+ yards and a score on Sunday, so they have that going for them.

• One bad throw for an interception in the first half is upsetting, but something you can recover from. Duplicating that throw almost step-for-step in the second half, however, is flat-out unacceptable. On both plays, you could theoretically blame his receivers for not coming back harder to the ball. But the common thread is the quarterback and Washington corners reading Wentz with ease.

There's a fine line to walk as a quarterback between protecting the football and making the defense feel uneasy, and Wentz still seems to be struggling with weighing risk-reward. If you throw an interception on a 50-50 play down the field, that's something I think you can live with. When it's a 10-yard comebacker and you're trying to force the ball to rookie wideouts, I don't really understand what he's seeing or thinking.

On top of the bad turnovers, Wentz held onto the ball far too long at times, taking unnecessary sacks on plays where he could have just thrown the ball away. His desire to extend plays leads to terrific improvisation at times, but he made a banged-up line look much worse than they actually were. Wentz took a particularly bad sack on third down midway through the third quarter, and the lost yards hurt big time on the ensuing Jake Elliott kick that fell just short.

These plays are why a lot of people are skeptical of Wentz as a top-tier quarterback. His talent is pretty obvious when he has it going, as he did for about 3/4 of the first half on Sunday. But the wild swings he goes through are maddening and he has to clean it up — even a bad Washington team proved they were capable of capitalizing on his errors. He is at the point in his career where it's simply not good enough to just be able to hit high peaks.

• The QB will take a healthy amount of heat for the second half, but in fairness to Wentz, he was having to fear for his life for a lot of the game. I don't think there was a single guy on the offensive line who could say they had a good day at the office on Sunday, and that includes stalwarts like Jason Peters and Jason Kelce, both of whom came up small in the opening week.

It would seem that if you're going to invest a ton of money in a guy who is supposed to be the franchise quarterback, you should put the proper protection in front of him to keep him from getting hurt. Wentz is not going to stay healthy for long if he takes a beating like this every week, nor is he going to be a productive QB if every single throw he takes necessitates him stepping into a huge hit. Lane Johnson will only fix so much here.

• It would be easy to pin Washington's comeback exclusively on Wentz and the offense, but I think that would be letting the defense off the hook for how they responded after the offense sputtered. With Football Team pinned back deep in their own territory, the defense looked great. Whenever they had to respond to adversity, they absolutely fell apart, failing to get pressure and struggling to keep track of receivers all over the field.

Giving up 27 straight points is a teamwide failure. It's even more frustrating with how they started — Darius Slay did a great job of blanketing Terry McLaurin, Malik Jackson was blowing up plays in the middle of the line, and role players like Josh Sweat stepped up to take advantage of a shaky Washington line.

All of that started to fall apart as the game wore on and fatigue setting in, with Football Team imposing their will physically throughout the second half. They let Dwayne Haskins settle into a rhythm, and while I'm no big believer in him, any NFL-caliber quarterback can get rolling if you give him time to get his legs under him. The pressure wasn't getting there late, and that provided opportunities for him to step into throws and extend drives just long enough for the Eagles to break.

• There will be a lot of people upset with Doug Pederson for the run-pass mix (or lack thereof) on Sunday, and skewing so heavy toward the pass certainly contributed to Wentz's struggles. But it wasn't the only problem with play design, and it felt like the Eagles refused to adjust how Wentz was being used to their own detriment.

We all know by now that Wentz is often at his best when you put him on the move and get him outside of the pocket. There were few attempts to actually lean into that fact against Washington. Yes, one such play got blown up before he could get out of the pocket, but that's not an excuse to abandon it as a strategic plank altogether.

If Wentz is having problems with overthinking and overholding in the pocket, simplify the game for him. Make the defense adjust to different looks and different styles, instead of pinning their ears back and attacking Wentz in the pocket on down after down. Football's rules have shifted to help offenses, but it's not all that difficult to play defense when you know what's coming every play.

And of course, run the damn ball, too! Sure, this isn't the best group of backs without Sanders in the lineup, but you still have to keep defenses honest. Hell, use the new speed you have from the wideouts and try some end arounds or gadget plays. I'm all for a pass-heavy attack, but a pass-heavy attack with little-to-no variety is just as useless as the "three yards and a cloud of dust" offense the NFL has abandoned. I'm all for aggression, but you need to pick your spots with aggression.

This is a brutal loss, and these are games the Eagles absolutely have to have if they want to be a playoff team. They're now under a lot of pressure to win the next two weeks before their schedule gets tougher. Pederson has a lot to answer for.

• It's hard to even keep track of all the injuries the Eagles dealt with/are dealing with at this point. Piled on top of a healthy inactive list, Philadelphia started losing players one-by-one. From Boston Scott to Jack Driscoll to Vinny Curry, bodies just kept dropping for the Eagles, and the human toll became obvious as Washington crept back into the game.

It's hard enough to deal with a depleted offensive line as it is, but when you're having to shuffle guys in and out and throw the backups to the backups into action, that's when things start to get messy. If nothing else, the Eagles badly need to get Lane Johnson healthy and back in the lineup to stabilize the right side of the line, which should help keep Wentz upright and boost a rushing attack that was anemic for long periods in week one.

The Curry injury seems to be especially bad, with the veteran defensive end needing to be helped into the locker room by multiple trainers in the fourth quarter. Stay tuned on that one, which the Eagles are calling a "hamstring injury."

• I didn't think it would be possible for a Philadelphia team to top the 2019-20 Sixers in the "kick in the balls" loss department, but the Eagles are off to a flying start.