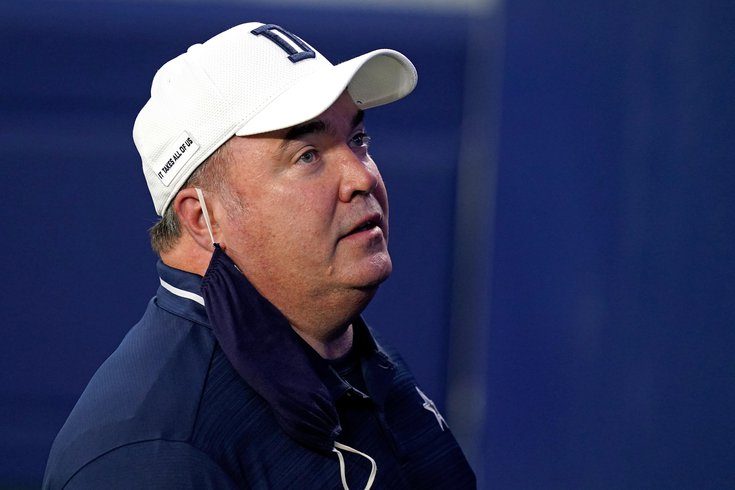 Week 1 of this weird NFL regular season is in the books, and for the most part things went as expected, with a few minor surprises. There are no obituaries this early in the season, of course, so let's just get to the hierarchy.

I get that the Panthers were in a close game against the Raiders and had a chance to win, and once you get in the heat of the battle, it's difficult to think, "Hey maybe we should try to preserve our awesome running back a little for a time in the future in which we're reasonably going to contend for something worthwhile." But if that kind of usage continues, they're just going to pile up a lot of mileage on their best player for no real benefit, and in a season in which there aren't even fans in the stands.

15) Giants (0-1): On the Giants' opening drive, they picked up a couple of first downs and seemed to be moving the ball confidently, until they were faced with a 4th and 1 at the Pittsburgh 40-yard line. No-brainer "go for it" situation, right? Nope. After taking pride in putting his team through a hard camp, Joe Judge didn't reward his players by trusting them to pick up a yard on fourth down and continue the drive. Instead, he tried a lame hard count to try to draw a veteran D-line offsides, before taking a delay of game penalty, and punting.

On the ensuing punt, the Steelers gifted Judge and the Giants with the ball at the Steelers' 3-yard line on muff. They ended up kicking a field goal on 4th and Goal from the 2. Again, weeeaaaak.

Anyway, the Giants hung around for a bit, but after that series of events it was clear that the Steelers were eventually going to find their sea legs and put the Giants away, as they did. Judge had a chance to make an early statement that he believes in his players to make plays in big spots, and in that situation, he would have been relying on the only part of the roster (the offensive skill position players) that is actually good.

14) Lions (0-1): Speaking of head coaches who are in over the heads, Matt Patricia's Lions had a 17-point fourth quarter lead, but couldn't keep Mitchell freaking Trubisky from leading three late touchdown drives for the win.

According to Michael Rothstein of ESPN, the Lions have lost 10 games in which they had a fourth quarter lead in the Patricia era, and an 11th (the Week 1 opener last year), in which the Lions led by 18 but tied the Cardinals.

And so, Patricia was asked a fair question about how he might be to blame for those blown games. He countered by taking credit for Malcolm Butler's game-winning INT in the Patri*ts-Seahawks Super Bowl, lol.

Good Lord that is embarrassing.

12) Washington (1-0): The Washington Football team, your leaders in the NFC East, with sole possession of first place. Soak it in, Football Team fans.

OK, so the Football Team isn't going anywhere this year. It's still a bad team overall, but that defensive line is loaded, and deep, and Ryan Kerrigan aside, young. They have something to build around there.

11) Bears (1-0): Trubisky stunk for three quarters before he was finally able to take advantage of a Lions defense that lost Jamie Collins, Desmond Trufant, Justin Coleman, and were already playing without third overall pick Jeff Okudah.

The 2020 season is going to play out perfectly for the Bears to be built up, only to be knocked down. Their first six opponents on the season had a combined record of 33-62-1 in 2019, and they all lost Week 1 in 2020. It gets harder thereafter.

For an Eagles slant here, Carson Wentz is fortunate that Nick Foles didn't win that Bears quarterback competition in training camp, because Philly radio callers would be pointing out in droves that Foles is (fill in the Bears' record at any time over the next 6 games) in Chicago, while Wentz was the biggest contributing factor in a loss to the Football Team Week 1.

10) Eagles (0-1): Forget the mess that occurred on the field on Sunday. It's what is happening off the field that feels more alarming. The Eagles pride themselves on the idea that they have some sort of amazing locker room culture, but there's evidence mounting that things aren't awesome, or are threatening that cohesiveness.

The potential destructiveness of each of the above points can be debated, but there's undeniably an accumulation of issues brewing. It just feels a lot like there's some bad juju associated with this team.

To note, the consensus Eagles-Rams Week 2 spread was Eagles by 2.5 at TheLines.com. That has already swung wildly, as the Rams are now 1.5-point favorites.

If you were a Bucs fan who was cryogenically frozen, Austin-Powers-style, at the conclusion of the 2019 season, and you woke up just before kickoff of this game, you'd think No. 12 was some rookie they drafted.

Brady did not look the same as he has over his career during the 2019 season, and that has continued into 2020.

8) Cowboys (0-1): The level of crying over Michael Gallup's clear offensive pass interference in the fourth quarter of the Cowboys-Rams game is baffling to me. At real speed, you can see a clear push-off by Gallup to gain separation on Jalen Ramsey.

On the super slow-mo replay, many argued that Ramsey sold the push-off with some added acting. Maybe, but that was after he was already pushed away. Ramsey was in phase. His coverage on Gallup was tight. Instead of just trying to break up the pass, which he was in great position to do, he's going to flop, thus giving up separation, and hope the officials give him a call? That doesn't make any sense.

But also, just look at the friggin play, lol. This isn't a clear push-off?

Post-game, Mike McCarthy bitched not only about the penalty, but also the time of the game at which it was called, as if the rules of the game are different in the fourth quarter or something.

Aaron Donald sending Zeke to hell was so good I had to add some Jim Ross to it pic.twitter.com/mnTq6K3wm4

6) Cardinals (1-0): DeAndre Hopkins' debut with Arizona: 16 targets, 14 catches, 8 for first downs, and 151 receiving yards. So what if he had three years left on his deal when the Cardinals traded for him? Just go get the difference-making player.

5) Vikings (0-1): Look at all the separation on these Packers pass plays from Sunday:

The Vikings might have a big problem at corner.

4) 49ers (0-1): We won't crush the Niners yet for a Week 1 loss to an up-and-coming team, but as we've seen with innovative coaching staffs, other teams understand what you're trying to do, steal your best ideas, and eventually figure out how to stop you, simply because everyone is now running your concepts. It'll be interesting to see if/how the Niners' offense evolves to stay ahead.

2) Seahawks (1-0): Russell Wilson Week 1: 31 of 35 for 322 yards, 4 TDs, 0 INTs, 143.1 QB rating. Meh, whatever, nothing new there. Russell Wilson is awesome, and he has games like that. BUT... alarmingly for the rest of the conference, the Seahawks had a lead all day, and they let Wilson keep on throwing, when in the past the Seahawks have stubbornly (and stupidly) desired to be a run-heavy team.

They only ran it with their backs 16 times.

The following is a cut-up of Wilson's day on Sunday. I love the first thing that the commentator says at the beginning of this video.

"They (the Falcons) actually want to force Russell Wilson into throwing the football."

Oh? Smart thinking, Falcons. Let me know how that worked out for you.

1) Saints (1-0): I was impressed by New Orleans' defense Week 1. We mentioned above that if you didn't know that Tom Brady now played for the Bucs, you might think he was a rookie quarterback. Well, the Saints' defense had something to do with that. Compare the separation the Vikings allowed in the Aaron Rodgers video above with the separation allowed by the Saints on a great group of Bucs receivers in the Brady video above, and it's a pretty significant difference.