Let's take an early look at the spreads for each game on the NFL schedule this week... 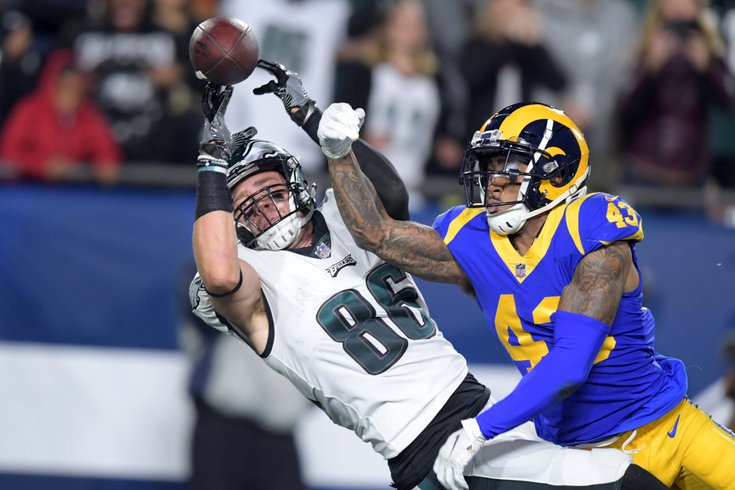 The first week of the NFL season is in the books, and there were plenty of surprises, from the Eagles losing to Washington to the Cardinals upsetting the 49ers in the opener. And while there are still two games left to be played on Monday night — the Giants vs. Steelers early and the Titans vs. Broncos late — before Week 1 officially comes to a close, we figured now is as good a time as any to give you a look at the latest Week 2 odds, perhaps allowing you to get an early jump on placing a bet for next weekend's slate.

All of the spreads you'll see below come from TheLines.com's consensus odds, and you can click here to see how they differ slightly at three different PA sports books — FanDuel, DraftKings and Bet Rivers — to decide where the best value is in Week 2.

It'll be Baker Mayfield vs. Joe Burrow in primetime battle between two recent first-round picks, and the oddsmakers believes it will be the more veteran Mayfield with the advantage in this one. Both teams lost their Week 1 matchups, with the Browns getting absolutely smoked by the Ravens and the Bengals losing a close one to the Chargers in which a penalty negated a game-winning TD throw by Burrow before their kicker totally biffed a 31-yard game-tying field goal attempt in the final seconds. Travel won't play a big part in this one either, so a six-point line for the home team is a strong one, especially considering the Browns only scored six points total on Sunday.

Wait, the Eagles are actually the favorites against a Rams team that just beat the Cowboys in their opener? Yup, but it's actually the smallest line of the week, with the Birds being less than a field-goal favorite. And that likely comes with oddsmakers assuming Lane Johnson and Miles Sanders will both be back for the Week 2 matchup. Add to that the fact that Doug Pederson seems to have Sean McVay's number and the fact that LA will be flying across the country for a 1 p.m. start and it begins to become a bit easier to see why they think this game will be so close. Of course, if the offensive line doesn't get its act together — and Johnson returning could go a long way — then it could be another long day for Wentz against Aaron Donald and Co. This is a line you'll want to keep an eye on.

UPDATE [Tuesday, 10 a.m.] — Well, that didn't take very long. After opening as betting favorites against the Rams on Sunday, the Eagles were already 1.5-point underdogs at all three sports books featured at TheLines.com.

We go right from the smallest line of the week to the biggest one — and one that could change depending on what happens in Monday night's game between the Titans and Broncos. Tennessee will be the home team against Jacksonville, who pulled off a surprise upset of the Colts in Week 1, but they will be playing on a short week, something that could be even tougher during a pandemic. Double digits is a lot for a divisional matchup, but if the Titans come out on Monday night and look like the team that surprised everyone by reaching the AFC title game in January, then they should take care of the Jags fairly easily.

Another game where we've yet to see one of the two teams yet to play, meaning another line that could see significant movement in the coming days, especially since it'll be the NFL debut for Giants head coach Joe Judge. The Bears pulled off a comeback win against the Lions in Week 1, and it would be interesting to see how this line would look if the Lions never allowed that to happen. Still, it'll be a home game for Mitchell Trubisky and the Bears and that has to count for something, even if there won't be 60,000 screaming fans in attendance. That being said, if Daniel Jones, Saquon Barkley and the Giants offense can turn some heads against an extremely tough Steelers defense, this line could move toward the Giants in a big way.

This matchup between two Week 1 losers should be a good one. After the Cowboys opened closer to a touchdown favorite, there's been some movement toward the Falcons in this one, despite the fact that they were run over by Seattle in their opener. This suddenly becomes a huge game for both teams as they look to avoid starting 0-2, each losing a pair of games to NFL foes they made be fighting for wild card position with.

Neither of these teams have played yet, so it's hard to do any real analysis of what this game is going to look like. But that Steelers defense looks like it's going to be the real deal again this season, and if that's the case, it could be tough sledding for this Broncos offense.

Another matchup of 0-1 teams as the Kirk Cousins and the Vikings visit Philip Rivers and the Colts. The Vikings clearly had the tougher opening matchup against the Packers, and put up 34 points in the loss as their defense allowed Green Bay to go off for 43 points. Indianapolis getting three points as the road team means this is pretty much a toss up in terms of the actually talent between the two teams, assuming oddsmakers are still using the standard three-point home-team bump without actual fans in attendance.

How many matchups of 0-1 teams are we going to have in Week 2? Because it's starting to feel like a lot of them. The Bucs are clearly the better team here, losing to a very good Saints team in Week 1. The Panthers, on the other hand, lost a close one to the Raiders. The question here is really, just how good are the Bucs? Were their issues on Sunday their own? Or were they due to the talent level of their opponent. We'll have to wait to Week 2 to find out if Tom Brady and the rest of the revamped Tampa offense is as good as advertised.

Are you kidding? Another winless matchup? I know the 49ers, the reigning NFC champs, lost to the Cardinals in Week 1, but the Jets are not a good football team. Look for a big bounce-back from San Francisco. Don't overthink this one.

The Bills beat the Jets in Week 1 while the Dolphins fell to Cam Newton and the Patriots in their opener. And now, both teams have a second-straight division matchup on tap. Ryan Fitzpatrick had a miserable outing for Miami and has to know that fifth-overall pick Tua Tagovailoa is waiting in the wings. Meanwhile, Josh Allen threw for 312 yards and two touchdowns (104.6 rating) against the Jets. That being said, those two defenses are hardly the same, which likely played a large part in the disparity between the two. Still, oddsmakers have the Bills as a five-point road favorite, so they clearly like Buffalo in this one.

The odds for this NFC North matchup are a bit tighter than one might expect considering the Packers are the home team in this one and are coming off a big Week 1 road win over another division rival, the Vikings. Aaron Rodgers looked backed to his old self last week while the Lions collapsed late to lose to the Bears. This one feels like it could be closer to eight or nine points by the time kickoff arrives.

I don't think the Eagles are as bad as they looked on Sunday. And in turn, that also means that Washington probably isn't as good as it looked. The Cardinals are a young, up-and-coming team with a much better quarterback and arguably the best wide receiver in the game in DeAndre Hopkins. They'll be the home team on Sunday against Washington and should be able to handle their business. Of course, the Cardinals will have to be careful not to rest on their laurels after knocking off the defending NFC champs in Week 1.

The poor, poor Texans. They had to face Patrick Mahomes and the Chiefs in their opener on Thursday and now have to host reigning MVP Lamar Jackson and the Ravens in Week 2. Giving 5.5 points is a lot for a road team, especially against Deshaun Watson, but he no longer has Hopkins to throw to. The Ravens are a much better team and should handle their business in Houston.

The Chargers didn't inspire a ton of confidence in Week 1, needing a botched field goal to seal their win over the Bengals, who continue to find new ways to lose even after moving on from Andy Dalton. They won't have to find a new way against a Kansas City team that is, simply put, better. Will the Chiefs win by more than eight points? The way that team scores, it seems like a safe bet...

Cam Newton against Russell Wilson. This should be a great game, and it's a bit surprising the Seahawks are four-point road favorites in this one, especially considering how good the Patriots defense is. But that spread likely has more to do with the fact that the Patriots offense doesn't seem to have too many threats aside from Newton. You have to think Pete Carroll is going to do everything he can to try to make the rest of the New England offense attempt to beat him. And Bill Belichick is going to be figuring out ways to stop that from happening. It should be a great battle between two great coaches to cap off the weekend.

No odds have been posted for this game just yet, so stay tuned...