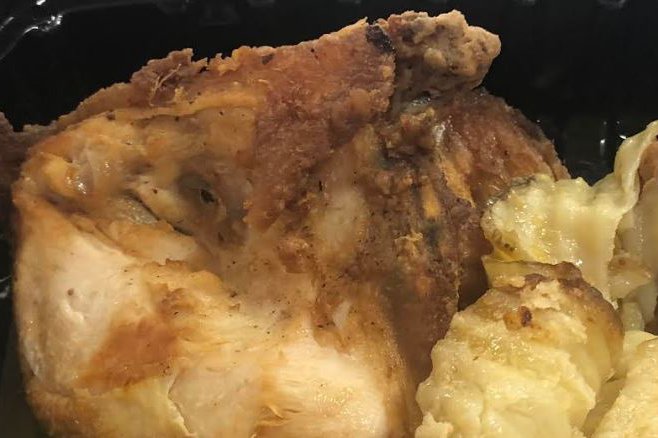 My chicken had a disturbing face in it. See if you can find it!

Throughout the season, we'll be posting press box food spread rankings for each of the Philadelphia Eagles' road games. This is probably of no interest to you if you're a sane human being, and, well, I don't care. I'm doing this anyway.

If you're fake-appalled by a sportswriter playfully complaining about free food, shut up nerd. Please note that we'll have the most recent press box reviews at the top.

Week 1, the Football Team served their press box food in pre-made see-through containers, and my assumption was that just about every other press box would do the same, as opposed to a having buffet style setup, or servers. The Eagles had servers, positioned behind an exotic labyrinth of glass partitions. There's one main glass partition, with cutouts where you can hand the food through. However, behind some of the cutouts were extra glass partitions, and it was hard to see where one secondary glass partition ended, and the next one began.

You might see a cutout on the main partition, try to reach through it to grab an individually-wrapped cookie or something, and than boom, your hand crashes into the second glass partition like a sparrow flying into a window. Yes, this happened to me. Anyway, here's an example of a secondary glass partition behind the initial glass partition. They did a nice job of keeping the food COVID-safe. 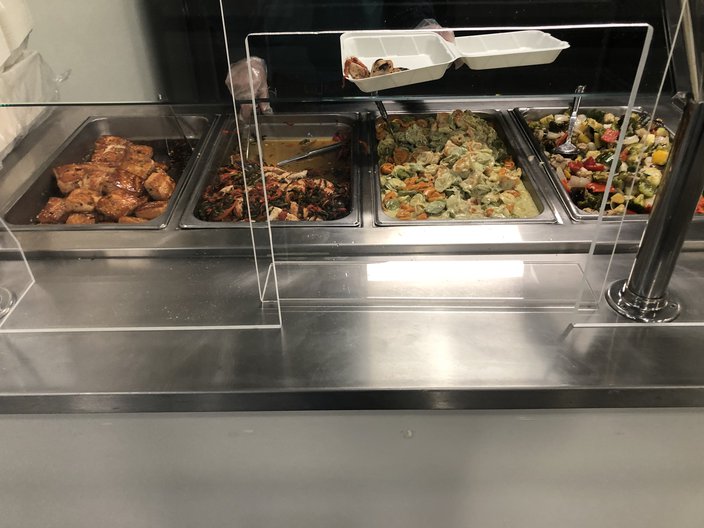 To note, that above spread was from the Eagles' Week 2 loss to the Rams. That week, the Eagles had salmon, chicken, tortellini, and roasted veggies. The true baller of the bunch was the tortellini, which had some kind of excellent cream sauce on it, but we're not reviewing that here.

Week 3 against the Bengals felt like a more apt time to review the Eagles. I wondered if they might slack off in a game that CBS had their W-crew calling (W, as in, A, B, C, D, etc..), and that no out-of-town Bengals reporters bothered traveling to.

But nope, they did a nice job, keeping up their consistency from Week 2 to Week 3. They served spicy chicken wings (but like, upscale spicy chicken wings, if that makes any sense), ribs, rigatoni, rice pilaf, and broccoli. Here's the chicken, ribs, and rigatoni. 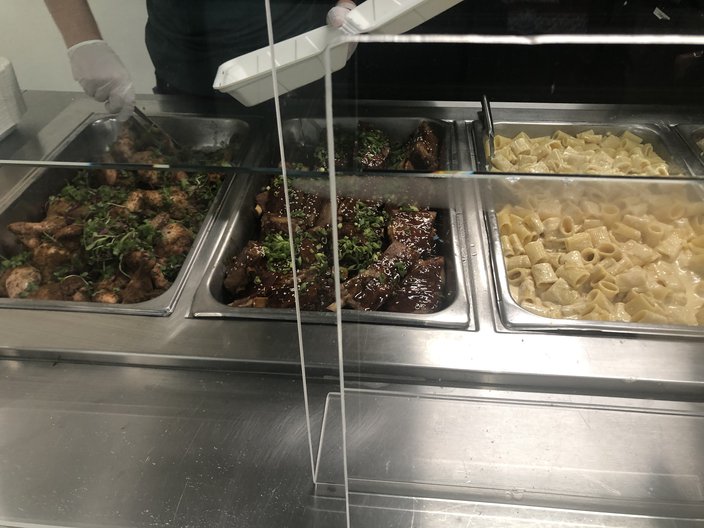 The chicken was very tasty, but messy, the ribs were OK, and while the rigatoni wasn't as good as the tortellini the week before, it was still pretty good.

The Eagles also had a robust selection of salted snacky treats and candies. First the candies:

Cheetos are really a bad choice for a work environment, what with them turning everything in their orbit bright orange. Also, Otis Spunkmeyer sounds like a gross act you might read about on Urban Dictionary.

Missing in action were the Eagles' soft pretzels, which made my 2019-2020 press box food spread all-star team. They are being replaced, temporarily I hope, by individually-wrapped soft pretzels, that are, eh, fine, I guess, but just not the same. I get it, but I don't have to like it.

They also had some healthy refrigerated yogurt mixes and salads.

Oh! And bottled waters are back! The Eagles took them away in previous seasons as part of a green initiative. I'm all for saving the planet, but personally, I don't think serving water in plastic bottles is going to be what eventually makes the Earth uninhabitable. My preference would be that our leaders make high-level, meaningful global preservation a priority. So give me my bottled water, and I'll do my part in voting out the Earth-destroying dipshit currently in the White House. Deal? Cool.

During the game against the Bengals, I had the following candies:

It was basically a shame spiral, and the sugar caused me to not shut the f*** up for four hours during the game. My apologies to Jeff McLane and Les Bowen of the Inquirer, as well as Evan Macy of PhillyVoice if I annoyed anyone. And then by the time the game ended, I didn't feel like writing and just wanted to take a nap.

Postgame, the Eagles had strombolis, that aren't good, but are still a step up from the gross pizza they used to serve after games. I skipped that Week 3, since I already sampled it Week 2.

Overall, a nice job by the Eagles. Certainly a better job by the food folks than the actual product on the field. I give it a solid B.

A year ago, the Football Team tied with the Jets for the second-worst grade on the season, with a C-. The only team they beat out were the Jaguars, who got an F.

Food spreads aren’t going to be the same in 2020 as they were in 2019, because, you know, nothing is the same in 2020. In reality, they’re not even going to be food “spreads” at all. Typically, teams serve food, buffet-style, with some rare exceptions. For example, the NFL had boxed meals at the Eagles-Patri*ts Super Bowl in Minnesota, and the Rams earned an F in 2018 with their comically bad boxed meals.

In 2020, my assumption is that it’ll be boxed meals across the board, which should be a fun wrinkle for the press box food ratings this year. Because I have very little to compare to from previous years, boxed meal-wise, my grades may be a little more fluid this year, and are subject to change as the season progresses. If I grade a team harshly early in the season, and later realize that they weren’t so bad, comparatively speaking, then I reserve the right to go back and re-evaluate. Good? Great. OK, onto the Football Team “spread.”

The pre-game meals stunk. No, like, I mean, literally, they smelled bad.

“The pre-game meal smelled so disgusting it made me want to leave the press box,” Eliot Shorr-Parks of 94.1 WIP noted.

On the side, they had three muffins. Yes, only three when I looked, lol. They also had some refrigerated yogurt, a danish or two, trail mix, peanuts, chips, and assorted drinks. The coffee was via a Keurig machine, car dealership-style.

"I appreciated the peanuts," said Bo Wulf of The Athletic.

What I appreciated about the Football Team spread was that they had boxes with clear lids, so you could see what you were getting. I imagine that some teams will have boxes that don’t offer a food preview. They will be docked points, if so.

Anyway, I had the “brunch box.” It was gross. The chicken was super dry, and the potatoes looked and tasted like waffle fries marinated in water. Corn on the cob is also just a terrible choice for a press box. You get your hands all slimy, and then you’re left with corn stuck in your teeth. That’s a side for backyard cookouts, not work environments.

I wondered if I should have gone with one of the other options instead.

“The bacon was mushy and might have been spoiled,” Jeff McLane of the Inquirer said. “The pancakes were stale.”

OK, so maybe not. A look at my brunch box: 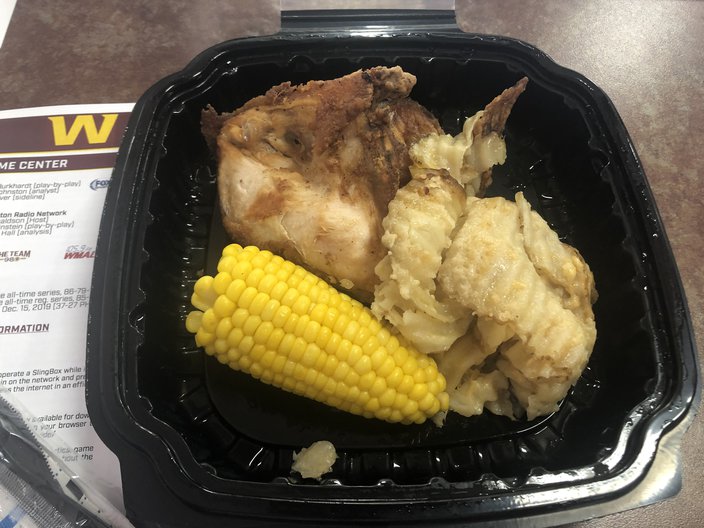 I happened to post that picture on Twitter, and a reader made the astute, yet horrifying observation that my chicken seemed to have a face on it.

They left the damn face on the chicken pic.twitter.com/V762CIE6p0

I think it looks like some combination of a rooster, Jabba the Hutt, and the baby dinosaur from Dinosaurs.

At halftime, they had hot dogs and chicken quesadillas. I had a hot dog. It was fine, I guess.

“The chicken quesadilla was edible — the best thing I could say about it,” McLane said.

No cookies. No cake. No sweets of any kind. That seems like an easy enough thing to serve. Just individually wrap them. D.